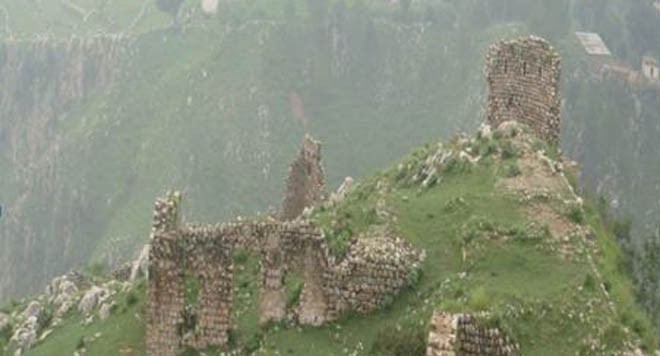 The recent rains and floods in Kashmir have caused great damage to life and property on both sides of the Line of Control (LoC). Specially, the devastation caused by floods in the city of Srinagar and its surrounding areas is unprecedented as last reported flood in Jammu and Kashmir was less damaging than the present one.

On the west of the LoC, the devastation is obvious along River Jhelum (Vitista), River Neelum (Kishen Ganga), the inhabited mountains and valleys. Apart from loss of human lives and material cost, the common historical cultural wealth including archaeological sites, monuments and the centuries-old wooden architecture has also been damaged.

The region has a vibrant heritage starting from prehistoric period 4th millennium BC. This combination of natural tangible and intangible heritage serves as a landscape for tourism. Kashmir has a unique history of art housing several civilizations which exist in the shape of standing monuments of classical and medieval period.

The enchanting environments of Kashmir have given inhabitants an acute esthetic understanding that enabled them to create exquisite work of art and craft and indigenous culture. Geographically, Kashmir was enclosed within snow clad ranges approached through ancient passes and influenced by powerful crosscurrents. The receptive inhabitant of valley absorbs these connections skillfully so that these alien trends become an integral part of local culture.

The isolation of valleys in Kashmir facilitated an environment of sustainability and self-sufficiency which tends to make inhabitants self-contained. Neelum Valley in Pakistan-administered Kashmir is a classical example of self-evolvement and indigenous human knowledge. In the east, Neelum Valley was connected with Srinagar, the ancient capital of Kushana, housing epoch of Buddhist and Bharamic monuments. The Neelum Valley not only houses archaeological sites but remained an epicentre of armed conflict since 1990s.

Many archaeological sites all over the Kashmir are occupied by troops and partially destroyed by heavy shelling and bombing in the process. Beside these skirmishes, inhabitants face disasters including earthquake, floods, etc. Both natural and manmade calamities severely damage this area on both side of the LoC which need to be addressed through risk management plans.

At present, there is no policy or planning to safeguard cultural resources of Jammu and Kashmir by the administering bodies due to its disputed status. The stakeholders have not been able to identify and protect hundreds of archaeological and heritage sites of Kashmir. This cultural wealth of Kashmir is scattered in urban centres, small valleys, hamlets, thick forests and connecting routs of great Silk Road.

The isolation of valleys in Kashmir facilitated an environment of sustainability and self-sufficiency which tends to make inhabitants self-contained. Neelum Valley in Pakistan-administered Kashmir is a classical example of self-evolvement and indigenous human knowledge.

Historic perspective revealed that the earthquake of 1828 caused extensive destruction in Kashmir, including Srinagar, Kashmir valley, Neelum valley and Jhelum valley. Earlier, the region had faced natural calamity of 1885, followed by disasters of 1909 and 1957. The Rajatarangini, an ancient chronicle of Kashmir, confirmed the earthquake of 1515 ACE, during which river Vitista changed its course and water caused great damage to inhabitants.

The rich cultural wealth of Kashmir faced devastation due to natural and human vandalism. During the earthquake of 2005 in Pakistan-administered Kashmir, precious archives of KH Khurshid Library were destroyed and Cultural Historical Museum in Red Fort Muzaffarabad was destroyed and looted which has not been restored so far. During the same calamity, the remarkable Kashmiri woodwork architecture, precious household articles, art & craft were damaged. A large number of artifacts were taken out of the valley by smugglers and antique dealers.

Another aspect is the systematic and deliberate destruction of cultural and historical legacy of Kashmir through armed conflicts. This is to deny and delink the people from historical identity due to political or ideological reasons. We have evidence of destruction of ancient literature of Sharda in Neelum Valley during the political division of subcontinent. During the armed conflict of 1990s, dozens of artisans and masters of indigenous art and crafts were killed in the Indian-occupied Kashmir. Many artisans living along LoC changed their professions and re-located because the area was under continuous firing.

Athmaqam district of Neelum valley, a market of traditional artisans, was destroyed due to heavy crossfire along the LoC which forced many skilled workers to migrate and quit traditional business. The indigenous art makers of these areas have not been given any incentive by the government. In Indian-administrative Kashmir, various religious and natural sites are occupied by security agencies.

All over the world, cultural, archaeological and natural sites are integrated into sustainable economic development programmes. Unfortunately, in south Asia especially in Pakistan, we have not been able to understand the importance of exploring this aspect.

Wars, conflicts, climate change, and natural disasters necessitate urgent steps for safeguarding the dwindling cultural wealth of Jammu and Kashmir. This can only be achieved through sensitising relevant organisations and public about the importance of cultural heritage. This would require an integrated approach starting from implementing UNESCO policies on cultures being destroyed in conflict zones. The heritage management policies should be framed and anticipatory steps taken to meet the future challenges to safeguard identity of Jammu & Kashmir for our future generations.