Fawad Khan talks to Instep about working in India, Khoobsurat and how he's handling stardom. 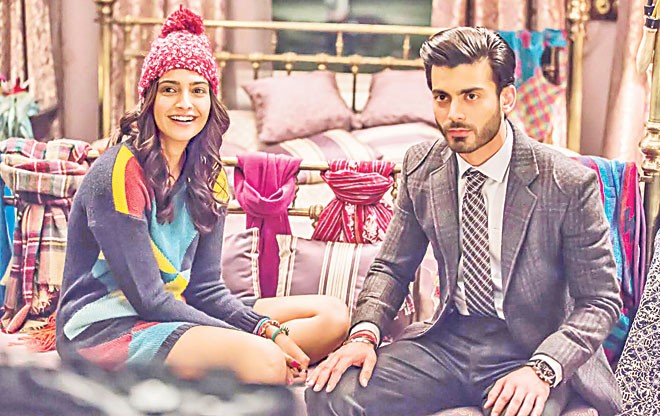 Mentioning his name on a social-networking site these days is like inviting women to start an admiration club. They are in awe of him. And no, this isn’t a hyperbole. That’s the kind of hype around Fawad Khan – not just in Pakistan but even in India. Tell him that and he gets embarrassed and blushes, all at once. Maybe it’s his alluring looks or the silvery voice and dreamy eyes that make most go weak-kneed, but just as I meet the man for a tête-à-tête, I realise, there’s also a lot more to him.

In a white t-shirt, blue jeans and geeky spectacles, he gives me a sneak peak to his intellectual side just as Khan talks about his maiden Hindi film, Khoobsurat, his craft, his process as an actor and more. But first, by popular demand, I ask him what his name means. "It means heart," he smiles.

Presenting to you, FK in a freewheeling chat…

So, there’s this whole hysteria around you and that’s very evident on social-networking platforms with women swooning over you. How do you react to all of this?

Fawad Khan: It’s endearing, it’s very heart-warming and I tend to blush at such compliments. But, having said that, I might dangerously add that I wish people would pull back a little. The reason why I say that is abhi toh bahut kuch karna hai, yaar. I’ve done so little, and if people react like this on just this much, then soon they might get bored. I don’t want them to get bored. I’d rather keep the interest alive.

But amidst all this stardom, how do you maintain your sanity?

FK: I come from very humble beginnings and I’m living the same lifestyle now. That hasn’t changed me. Obviously, the more money you make, the better you want to make your life, but that doesn’t change the person you are. So for me, I still come from the same place, I still live with the same people. What I don’t like is too much attention and that people think that is arrogant of me. I’ll be honest. I love the attention that I get from the audience but I don’t like it getting in my private life. If that’s something which is arrogant about me, then so be it. I can’t change people’s mindset.

The audience generally has no expectations from a debutant. But in your case, while Khoobsurat is your maiden Hindi film, people have been exposed to your work in the past and have expectations. Does that work as an advantage for you, or does it add pressure?

FK: I think it works as an advantage as well as a disadvantage. The advantage being that more than a knock on the door, it’s become a foot in the door. The disadvantage is that expectations are raised. I fear that! At the very least, you need to meet peoples’ expectations, if not surpass them. That makes me very nervous.

What drew you towards doing Khoobsurat?

FK: I think what had drawn me towards the film, first and foremost, is the chance to actually get out of my comfort zone, which I’d been avoiding for a very long time. As an individual, your growth really depends on seeing the world and exposing yourself to different kinds of people and getting an opportunity to work with them. That is educating and it’s liberating for me, so I think that was the biggest reason. Khoobsurat is a straight-forward, fun film; it doesn’t have a lot of theory or over-intellectualised content. When the film came to me I was like yes, let’s just take a dive and see (smiles).

You love to get into the technical aspects of the film, since you wish to be behind the camera someday, so what has your learning curve on this film been?

FK: As far as being behind the camera is concerned, yes, I do have a fantasy about that because I feel it comes very naturally to me. I think I’ve had the chance to express that side of me in the couple of projects that I’ve done in the past. I’ve been good friends with some directors I’ve worked with and I’ve asked them to let me do a couple of scenes and set up the shots and stuff.

So, my learning curve on Khoobsurat has been the same. But this is my first project in the industry, so I thought it would be a bit brash of me to assume so much control.

Most Hindi films are known for their larger-than-life quality and the song-and-dance sequences, whereas most work you’ve done so far has been very realistic….

FK: I would love to do larger-than-life, theatrical things. I believe in theatricality. It’s not something I don’t want to learn, I don’t disregard it. I love watching it, but I also feel that everything has its own time and place. The most recent example is a promotional video we did for Khoobsurat; I was just given three hours to practice. I just wish I was given more time. That song is very larger-than-life, very Disney-ish, over-acted a bit. I needed time to get that right. This dance bit is something I want to really learn.

And as an actor, what’s your process of improvising like?

FK: Whenever I can take advantage, whenever I feel I have that much leeway, I try to improvise as much as possible. I like to keep things real and whenever I’m permitted, I like to apply that to my scenes, my lines. Whenever I’m caught acting on-screen, you can say that someone else has interfered (laughs). I believe in improvising because I feel it’s about reacting and feeding off from your co-actors. Your performance is just as good as your co-actor’s, in any project. You cannot make the magic happen alone. And when you see isolated performances in films, it’s because actors are not co-operating with one another. The magic has to happen together. I totally believe in the art of improvising and the more connect you have with your co-actors and team, the more you can do something very unexpected on-screen, and it’ll click.

So are you self-critical?

FK: I’ve mostly done television in the past, and I’ve always felt that television for me is like a rehearsal ground, to sort of polish my craft. So, once I’ve done a project, the reason why I would watch my work again, would be to see and analyse what I’m doing wrong, rather than what I’m doing right. That has been my learning curve as an actor.

When you spend so much time living one character, is it difficult to shed that image and move to another?

Putting various emotions to display on celluloid may be difficult for some actors, especially the ones who aren’t open about their emotions in real life. How does it work in your case?

FK: Because I’m so reserved off screen, when I’m on-screen, that’s my outlet. I become besharam in front of the camera. But that’s only possible when your director or co-actors don’t make you conscious. When you make your actors conscious, you destroy their ability to potentially perform. So, emoting on-screen for me gets easier when I’m comfortable with the people around me. But my philosophy is that you can’t have a standard way, that this is how you have to cry in every film or show. There are ten different ways of crying. Some people are very sensitive but their way of expressing their emotions is being deadpan and that in its own is an expression. And then, sometimes, you just completely break down. That’s what adds originality to the character.

Are there any other projects lined up for you after Khoobsurat?

FK: In Pakistan, there are 2-3 projects that we are very seriously in talks about, but nothing is concrete now. Similar is the case in India, there are a few things that I’m being approached with, but again, it’s just table talk, nothing on paper. But I’d love to come out with it.