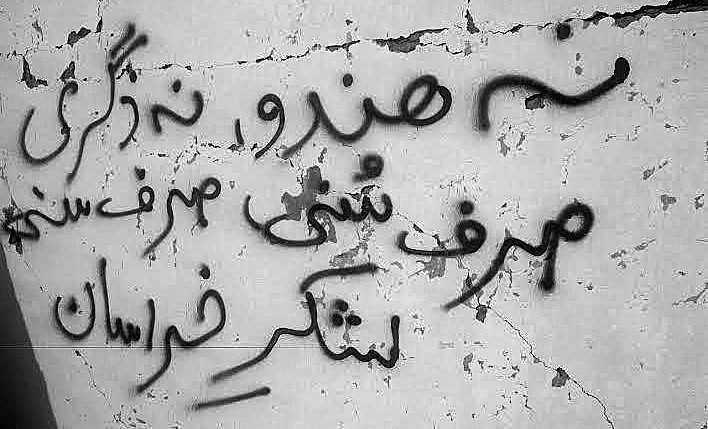 After extending its area of influence in the Middle East, the Islamic State (IS) has apparently begun expanding its ideological boundaries to South Asia, mainly Pakistan.

In a clear bid to broaden its influence in Pakistan, the IS has recently distributed pamphlets in Peshawar, declaring that the caliphate led by Abu Bakr Al Baghdadi, was planning to expand its boundaries from Iraq and Syria, to Khorasan, which includes Pakistan, Afghanistan and parts of India.

Distributed in the first week of September in Peshawar and in the Afghan refugee camps on the outskirts of the city, the booklet titled, Fatah (victory) was published in Pashto and Dari languages. The logo of the pamphlet has the kalma, the historical stamp of Prophet Muhammad (PBUH), and a Kalashnikov assault rifle. Introducing itself as Daulat-e-Islamia (Islamic State) in the pamphlet, the IS made an appeal to the local people to support its struggle for the establishment of an Islamic caliphate.

Besides distributing its literature and pamphlets, some of the ISIS supporters have also made wall chalking in Peshawar, asking local population to join and support the group. The distribution of the IS pamphlets in Pakistan as well as on the Afghan border shows that the ultra-radical Islamist group is trying to inspire militants even in the strongholds of Taliban and al-Qaeda.

Following the rise of IS in Middle East and its proclamation of a Caliphate, the al-Qaeda leadership has clearly distanced itself from the group, chiding it for its violent and brutal expansion. As things stand, it appears both al-Qaeda and IS are competing for support from Islamist militants. Abu Bakr Al Baghdadi, a firebrand Sunni cleric who was held prisoner by US troops for four years in Iraq and who wants to topple the Shia-run Iraqi government, commands over 10,000 Sunni fighters who had lost power after the fall of the Saddam regime.

The most worrying development from Islamabad’s point of view is that the Islamic State’s ideology has found resonance in Pakistan and a number of jihadi groups have already announced support for the IS.

The ultra-radical Islamist group is trying to inspire militants even in the strongholds of Taliban and al-Qaeda.

A splinter group of Tehreek-e-Taliban Pakistan (TTP), Jamaatul Ahraar, has already declared its support to the Islamic State. "IS is an Islamic jihadi organisation working for implementation of Islamic system and creation of the caliphate," Ehsanullah Ehsan, Jamaatul Ahraar leader and a former Taliban spokesman, told Reuters by telephone on September 4. "We respect them. They are our mujahideen brothers. If they ask us for help, we will look into it and decide."

But Jamaatul Ahraar is not the first Pakistani militant group to have extended support to the Islamic State.

A previously little known jihadi outfit -- Tehrik-e-Khilafat -- which was considered a part of the Pakistan Taliban and had claimed responsibility for a string of terrorist attacks in Karachi, was the first one to pledge allegiance to Baghdadi on July 12, 2014 while vowing to raise the Islamic State’s flag in South Asia. The group became the first jihadi outfit in South Asia to break ranks from al-Qaeda and declare its allegiance to the Islamic State.

"Sheikh Abu Bakr al-Baghdadi shall consider Tehrik-e-Khilafat as one of the arrows among his arrows which he has kept for his bow. We are praying almighty Allah to give us chance to see in our lives the expansion of the Islamic State’s boundaries toward the subcontinent and Khorasan region in order to hoist the flag of Islamic State here," a group’s spokesman said.

As a matter of fact, Khorasan is the historic name used by militants for an area covering, Pakistan, Afghanistan and some parts of India. Another interesting thing is that the IS map shows Afghanistan and Pakistan as part of the Islamic State’s Khorasan province.

Al-Qaeda and Taliban-linked militants believe that the movement for the establishment of the Islamic State of Khorasan will emerge from the region comprising Kunar and Nuristan provinces of Afghanistan and Malakand region of Pakistan. They deem Khorasan as the base camp of international jihad from where they will be expanding the Islamic State’s boundaries to other non-Muslim lands.

Under these circumstances, the Islamic State, headed by a fairly young leader, is already drawing a measure of support among younger jihadi fighters, mostly Sunnis, in South Asia, including Pakistan because al-Qaeda’s ageing leaders, most of whom are holed up in Pak-Afghan tribal belt to save themselves from drones, are more and more seen as tired, ineffective and uninspiring. It was probably the diminishing influence and appeal of al-Qaeda here that prompted the fugitive al-Qaeda ameer Ayman Zawahiri last week to announce the establishment of an Indian franchise headed by a Pakistani commander Asim Umar to raise the flag of jihad across South Asia.

More than two years since the beginning of the uprising against Syrian President Bashar al-Assad, thousands of holy warriors from various Muslim countries including Pakistan have reportedly travelled to Syria to fight with al-Qaeda-linked ISIS. And going by some latest media reports, hundreds more holy warriors belonging to the TTP and LeJ have reached Iraq to join hands with the forces of the Islamic State of Syria and Iraq. An Iraq-based jihadi group -- the Ansarul Islam -- has already released a video showing training activity in a jihadi camp dedicated to the memory of Maulana Abdul Rasheed Ghazi, one of the two cleric brothers who took centre-stage during Lal Masjid standoff in July 2007. In a recent development which may help the IS rally support among the Pakistani militants, the IS has demanded from the US the release of Dr Aafia Siddiqui in exchange for the release of Western hostages in their custody.

Terrorism experts believe that the rise and success of IS could play an inspirational role in Pakistan where 100-plus al-Qaeda and Taliban-linked jihadi groups are operating. But on the other hand, the Pakistani authorities are still not really concerned about the growing threat of IS in the country. They argue that most of Taliban militants operating in the region owe allegiance to Mullah Mohammad Omar and they would never accept a self-appointed Baghdadi as their ameer or caliph.

As far as the al-Qaeda militants are concerned, they believe that Baghdadi’s act of declaring himself "the caliph" was a rude attempt to usurp the authority of their ameer - Ayman al Zawahiri. Hence, the al-Qaeda leadership deemed it fit to renew its oath of allegiance to Mullah Omar recently and recognize him as their ameer, while reminding that their ameer Osama bin Laden too had pledged allegiance to Mullah Omar.

In short, the al-Qaeda leadership argues that it has been operating in South Asia for a long time and would not allow the Islamic State, which is based quite far away in the Middle East, to spread its tentacles to Pakistan.