The sole purpose in art

Kamal Hyat’s latest work at the Nomad Gallery, Islamabad shows that it is a means of extending and affirming the broad definition of Art 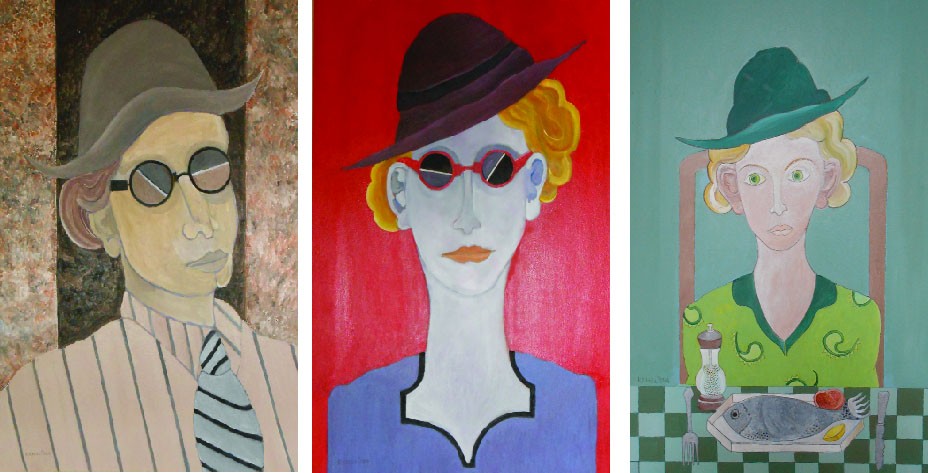 After his solo exhibition at Alhamra Art Gallery Lahore, Kamal Hyat is having another one person show at the Nomad Galley in Islamabad. This one includes his latest canvases along with previous pieces, all related to his personal vision and peculiar style. Figures of different backgrounds, often without any specific identity, are composed in various settings. Some of these images refer to real situations, while others suggest imaginary scenarios. They are painted with a sense of simplification, both in terms of rendering a human figure and choosing a subdued colour palette.

Men and women surrounded with birds or crowded in constructions, portraits of different personalities, mundane domestic activities such as having a meal or sitting with other family members are a few themes dealt with in his canvases. Although a few works indicate allegorical and mythological subjects, for example the crucified man, by and large the majority of paintings and drawings are based on ordinary and usual sources. Hence the titles like Woman in Green, Spring Time, Red Glasses and The Door are not different from whatever is portrayed in these works.

Kamal Hyat may well be considered an outsider in art circles owing to his background and visual vocabulary. But self-taught painters as well as late beginners do enjoy great respect, privilege and importance as major and mainstream artists across the world. In many cases, being untrained in conventional art education becomes a handy and unique advantage. What such artists offer is something new and extraordinary than the normal and expected art practices.

The most illustrious example in this regard is of Jean Dubuffet who, despite his (or perhaps because of) lack of formal art training, is recognised as one of the most significant figures in the international art scene.

The case of Kamal Hyat is different because his work may not fall into the category of naïve or primitive art. His style can be termed as simplification of forms by a person who is pursuing art not to prove a cause or to attain success or a prestigious place in high art. He is following this course to satisfy a natural urge to create pictorial objects. Thus the work is not bound to any specific movement or trend but reflects his honest vision and untarnished views on art and life.

In fact the work of Hyat is a way of combining life with art, or discovering one through the other. His observations of a person wearing a striped shirt, a girl in green hat, a woman with red sunglasses, or a family at a dinner table in a restaurant are all transformed from recollections to reflections. Perhaps in this group the painting titled Silhouette is the most remarkable, in which three diners are turned into dark shadows of human bodies, spread in three different directions (following the pictorial devices of miniature painting) around a big table with knife, fork and a plate laden with food. Interestingly the table is drawn as if seen from top, thus blending multiple perspectives. But more than that, the hands of three figures are embedded on the dark surface of the table, thus suggesting a primitive notion -- of art being a means to describe reality, rather than to depict or reproduce it.

The amalgamation of real, imagined and stylised is a special characteristic of Hyat’s work; one can presume that this combination has evolved without a conscious effort on the part of the artist. It is obvious that he follows his inclination to denote the real world in pictorial terms, and what emerges is a particular kind of imagery.

In that sense he belongs to a large group of individuals who are amateur artists, self-taught painters and untrained makers of images. In the same category, one can add the works of folk traditions, from the beginning of known and recorded history of art -- for example the famous statue of Venus of Willendorf (with similar kind of treatment/rendering of arm that is found in Hyat’s Silhouette) to wall painting from villages in India and North Africa.

Actually, it be would be intriguing to note or question the value of this kind of art making baptised as the Other Art; and why it has not been considered a sophisticated, developed and valid mode of visual expression. The divide between academic and popular art, and the triumph of academic art are matters which were scarcely suspected or disputed till the times of modernism and post modernity, in which contact with other cultures, theories of collective unconsciousness and need/demand for something new, exotic and extraordinary made it possible to admit parallel ways of looking and methods of working. Yet, apart from the networks of galleries, artists and art critics, the general population is still not prepared to accept a work as art that is beyond the standard parameters of conventional and academic skill.

In fact for a majority of people, skill is a pivotal element for making and judging an art piece. And what is meant by skill is the ability to replicate and imitate nature. Thus a painting or sculpture showing perfect human resemblance, a canvas portraying a natural scene and a work of art that reproduces reality in its minute detail is regarded as great art, even if it does not have any other quality to last as art.

In that sense Kamal Hyat’s work is a means of extending and affirming the broad definition and diameter of Art, without a conscious effort; because unlike his life and career, in his art Hyat does not have any other choice.

(The exhibition is being held from September 13-21, 2014 at Nomad Gallery, Islamabad)

The sole purpose in art