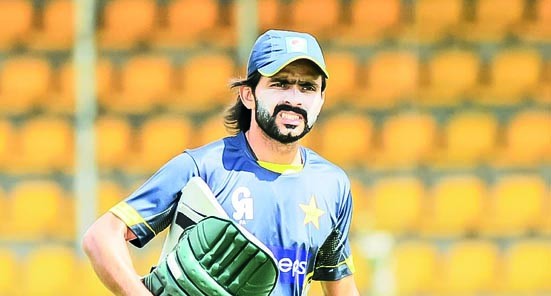 The third ODI against Sri Lanka could have marked the continuation of a quiet revolution in Pakistani ODI cricket over the last 14 months. Had they won, it would have been their fourth series win in six, to go along with reaching the final of the Asia Cup -- easily their best run under Misbah-ul-Haq. And it’s a revolution led by Umar Akmal, Ahmed Shehzad and, particularly, Fawad Alam. These three, along with Sohaib Maqsood, weren’t considered good enough to even be in Pakistan’s squad for the Champions Trophy last summer; and now they were the ones making some people even question Misbah’s place in the side.

Instead the third ODI proved to be the continuation of a far longer and more worrisome trend: Pakistan just can’t deal with pressure. They have now lost 11 of the 12 bilateral series deciders (BSDs for the purpose of this article) they have played since 2003. And they have also lost six of eight tournament finals since beating Zimbabwe in April 2003. Pakistan have spent a decade showing the sort of nerve that would make South Africa blush without it becoming a truly big deal. Add their record in ICC tournaments during this time (one win in four knockout matches) and the suspicion of a trend is only reinforced.

There are obvious reasons for why Pakistan should have such a record. The batting, particularly the top order, has historically been as stable as any elected government in the country. And in matches of significance or pressure, they resort to doing what they do best -- give their wickets away and stay as far away from the spotlight as possible. For instance, Pakistan’s average score in the eight finals they have played since 2003 is 210 -- an embarrassment considering this decade has been defined by flat pitches and an imbalance in the contest between bat and ball. In fact, only twice in these eight matches have Pakistan scored over 240; and if the one outlier (against India in Mirpur) is taken out, there has been only one hundred in the remaining seven finals by a Pakistani batsman -- Fawad’s debut hundred this March. In BSDs the record, unbelievably, is even worse. In those 12 matches Pakistan’s average innings score is 198, and the highest individual score by a Pakistani batsman is 78, by Mohammad Hafeez in a losing cause against Australia. The second-highest score doesn’t even belong to a recognised batsman.

When you add the matches Pakistan have played in ICC tournaments during the time period, you get a pretty grim reading of where exactly they have gone wrong over the past decade. Twenty-four high-pressure matches over 11 years -- not a small-enough sample size to ignore -- have resulted in a grand total of four wins for Pakistan. Their average innings score in these matches is 202, and only three hundreds have been scored by Pakistani batsmen in all these games.

And yet the average Pakistani superfan is busy planning and dreaming, calculating and fantasising, how Pakistan will win the World Cup next year -- in complete denial of the team he has to support.

It’s a far cry from the era of Wasim et al, when Pakistani fans assumed that unless an uber-competent and professional team (i.e. Australia or South Africa) or the all-conquering West Indies team was facing Pakistan, the result was usually in their team’s favour. And it wasn’t as if the batsmen were creating havoc back then either -- Javed Miandad aside, the big-match performances of Pakistan’s batting greats aren’t noteworthy. But Pakistan scored quick enough, and had enough quality in their bowling to always stand a chance. Pakistan’s tournament finals record from Javed’s six in 1986 to the 2003 World Cup reads: 21 wins and 23 losses (a vast majority of the losses coming against the three sides mentioned above).

­The batting has always been thus, it’s just that Pakistan batted quicker and had more wicket-takers in that era -- well, more than just the one they seem to be depending on right now.

Pakistan’s run rate of 4.55 during this era points to one of the reasons why they could compete even if big hundreds weren’t being scored; and their annual sojourn to Sharjah provided an antidote to all ailments. Over those 17 years Pakistan played 15 finals in the familiar environs of Sharjah, where they could compete with anyone and everyone. They won 11 of those finals, and with it encouraged unrealistic expectations in a generation of followers.

Through all this Pakistan’s bowlers can be considered relatively blameless. Shoaib Akhtar may average 31.1 in BSDs from 2003 onwards but those are numbers corrupted by the autumn of his career. His finals average of 20.8 shows his true ability to stand up when the need arose. Similarly, his successor as the leader of the attack, Saeed Ajmal, averages 23 in BSDs, and a rather decent 13.2 in the two finals he has played.

Yet even their numbers can’t hide the increasingly obvious problems Pakistan have with pressure -- whether that be Hafeez tuk-tuking his way through a T20 knock, a team dropping Sachin Tendulkar four times, or a top order acting like a house of cards. What happened in Dambulla wasn’t extraordinary; it was a continuation of a trend that calls for drastic measures. With the batsmen becoming increasingly dominant in the 50-over game, Pakistan have to catch up with the rest of the world. And regardless of whether they solve this or not, they also need to find more than just a leader of their bowling attack to save them.

Or they could just go back to Sharjah and hope the magic returns. It has worked before, after all. --Cricinfo