Truths and lies about signal-free corridors

Is urban development merely about procuring a certain ‘look’ for the city at the cost of human dignity? 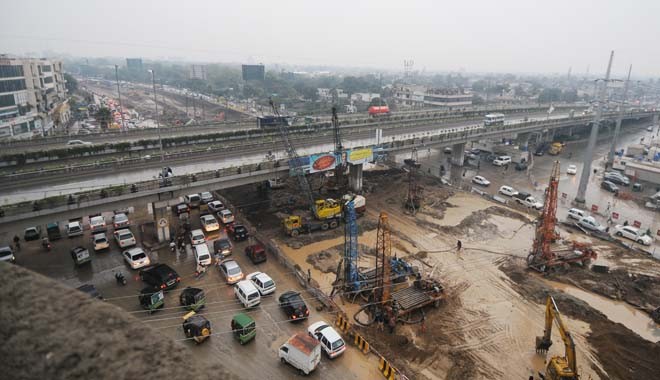 Pakistan’s income divide brings to the fore many related disparities. Of the most jarring of these is the divide between those that walk the city and use its public transport, and those that have the privilege of commuting in private vehicles.

These two realities represent two different worlds, worlds defined by not only vastly different physical comforts, but more so, one with a semblance of dignity in the every day experience, and the other blatantly without.

In the universe of the Pakistani vehicle commuter, the pedestrian is deemed the nuisance, the ‘illiterate’ who, because he is not ‘civil’ enough, will jump over traffic medians, cross the road from wherever possible, and indulge in road acts which are considered almost ‘suicidal’.

Also in the eyes of the city planner, the pedestrian is our invisible citizen, the one who deserves no place in the first world dream of a city with expressways, iconic glass towers, and other symbols of wealth.

Meanwhile, the pedestrian stands at the edge of the road, huddled together as a family, and finally, scurrying across, afraid and apologetic; young, old, infant, crippled, disabled, man, woman, all are condemned to the same fate.

Advancing in this vein, the latest addition to Pakistan’s urban development model is the ‘signal-free-corridor’: an entity which as its name suggests, eliminates traffic crossings for kilometres at a stretch, and encourages fast-moving vehicles often at speeds of 80-100km/hour to whiz through the city.

This not only saves driving time for the vehicle user, but is also a monument to ‘modernisation’ according to its visionaries, whereby first time visitors will be bedazzled to see that Pakistan’s cities truly are at par with Shanghai,  Hong Kong, and Dubai.

Ironically, when the narrative is developed from the flip side of this ethos, the antagonist becomes the city’s planner, and the pedestrian is the victimised ‘Vulnerable Road User’.

Across the developed world Vulnerable Road Users (or VRUs) are defined as "non-motorised road users, such as pedestrians and cyclists as well as motor-cyclists and persons with disabilities or reduced mobility and orientation".

By virtue of being vulnerable and at greatest threat, design for the safety and convenience of the VRU is, therefore, a priority above other road users making him/her the VIP in traffic planning objectives.

Safe pedestrian crossings at traffic signals, adequately distributed at comfortable walking distances then become the paramount planning standard, making ‘signal free roads’ in the city not only inhuman, but a violation of the basic rights of the pedestrian.

The construction of expressways within the city, or ‘signal-free corridors’ as we call them, is a phenomenon of the modernist Western city of the 1960s.

Moses is known for building thirteen expressways across New York city, destroying traditional neighbourhoods in doing so, clearing slums, and attempting the construction of a parking lot for an expensive restaurant in place of a playground in New York’s Central Park.

This paradigm was eventually rejected, and much critique has followed Robert Moses’ ‘mistakes’, making him a lesson in how not to develop a city.Among the strongest of Moses’ critics was urban activist Jane Jacobs, who advocated that an understanding of the urban fabric, equity and the city’s people must be the foremost consideration in planning.

Today, most of the world’s ‘developed’ cities have worked out systems of equity in road design and city planning, where the ‘signal-free-corridor’ concept is not only obsolete, but where many of the city expressways and flyovers that did exist have been demolished.

Pakistan’s ‘signal free road’ phenomenon -- the absurd fusion of an outdated 1960s urban development model and the existing neo-liberal paradigm of the ‘world class city’ -- has spread like a virus in recent years.

The conversion of Karachi’s Shahrah-e-Faisal into a signal-free road began in 2010 to the delight of its motorised vehicle users; to date the majority of traffic signals have been removed with only two remaining on this 16km artery. Conversely, hiding in bushes along the traffic median, one sees families preparing to cross the road at the first sign of an opportunity.

According to a 2013 report by the Road Traffic Injury Research and Prevention Centre, Shahrah-e-Faisal was Karachi’s most dangerous road for pedestrians, reporting the highest number of injuries and 6 per cent fatal cases.

Islamabad’s Seventh Avenue which was widened several years ago, displayed a road sign warning pedestrians that crossing will be ‘at your own risk’. Only after criticism in the print media, the sign was removed.

Lahore’s signal-free Ring Road, much of which involved the widening of pre-existing Bund Road, connects vehicular traffic from one end of the city to the other.

Here too, road accidents in which a large number of pedestrians such as schoolchildren have been injured, have increased manifold. Why? Because by definition, a ring road surrounds the city at its outermost periphery, and is not meant to cut through its dense parts as is the case in Lahore.

Deeply inter-connected well-developed urban activity on both sides of the ring road has existed for years prior to construction; after the road was made, the activity remains, but road design blindly overlooks this.

Lahore’s Canal Bank road is no exception, where a series of underpasses makes it the location of some of Lahore’s fastest moving vehicular traffic. At a recent public hearing, the further widening of the canal at Chaubacha was hailed as another jewel in the city’s crown, a plan in which pedestrians are at best relegated to overhead bridges.

Needless to say, pedestrian inconvenience makes the overhead bridge a ridiculous alternative to safe crossings at road level; it is under-utilised for the difficulty it puts pedestrians in, particularly the elderly, families with young children, or commuters carrying luggage.

Ferozepur Road has been the next in line, where traffic intersections continue to be eradicated. And now to top the list, Azadi Chowk: surrounded by the city’s densest neighbourhoods, Lahore’s centre of culture, historic sites, and small-firm commerce and industry, has been cut up ruthlessly to make way for a network of signal-free roads.

Not only do these expressways disregard the scale and integrity of the Minar-e-Pakistan and centuries old architectural sites which define historic Lahore, they have in their midst tragically eliminated places which have been the city’s social and cultural hotspots, such as Attique Stadium, and eaten away 178 kanals of Iqbal Park.

The developing world city is a unique phenomenon, where the dynamic mix of income groups, ‘formal’ and ‘informal’ economies and urban systems creates a multi-layered amalgam.

The mixing of a spectrum of traffic modes is part of this unique city profile, from the vehicle, to the donkey cart, the cyclist, the pedestrian, the rickshaw, to the motorcyclist.

The fast-moving vehicle is only one of the many stakeholders of the road, and ironically while we plan most faithfully for this category of road user, cars account for only 7-8 per cent of all road traffic in Lahore. The issue’s resolution, therefore, lies not in marginalising the weaker road user, but finding appropriate and inclusive solutions, such as the at-grade segregation of fast-moving and slow-moving traffic.

In the words of Bogota’s former-mayor Enrique Penalosa, renowned for refusing a major MDB loan for a flyover and instead redeveloping the city for cyclists and pedestrians, "trying to solve traffic problems by building more and wider roads is like adding fire to gasoline".

Here it is important to understand the value of traffic intersections. Traffic signals distribute traffic, so that large numbers can be divided into smaller ‘batches’ ensuring a smoother flow, and preventing bottlenecks. The world’s well known metropolises such as London are discouraging vehicles from entering already congested city centres by imposing taxes and levies on private cars.

City walkability is considered one of the most important indicators for a prosperous, ‘people-happy’ city in most developed countries. Pavements in many of Europe’s city centres are up to 15-foot wide. Holland is known for its well-designed footpaths and cycle tracks. In Denmark’s capital Copenhagen, 36 per cent of all city commuters travel by bicycle.

The debate raises the important question of our understanding of ‘development’. Is urban development merely about procuring a certain ‘look’ for the city; a ‘look’ that matches our dreams of being ‘first-world’?

In the wisdom of Jane Jacobs, "It is futile to plan a city’s appearance, or speculate on how to endow it with a pleasing appearance of order, without knowing what sort of innate, functioning order it has".

Across the world in discussions surrounding our vision for the city of today, the more innate notion of a city creating and supporting a ‘humane’ society is seen as integral.

This people-centred vision of the city is beautifully articulated by Enrique Penalosa, "A city speaks in every detail; it either speaks for human dignity or it speaks of a lack of respect for human dignity. A city is only a means to a way of life, and every detail in a city should reflect that human beings are sacred".

Truths and lies about signal-free corridors