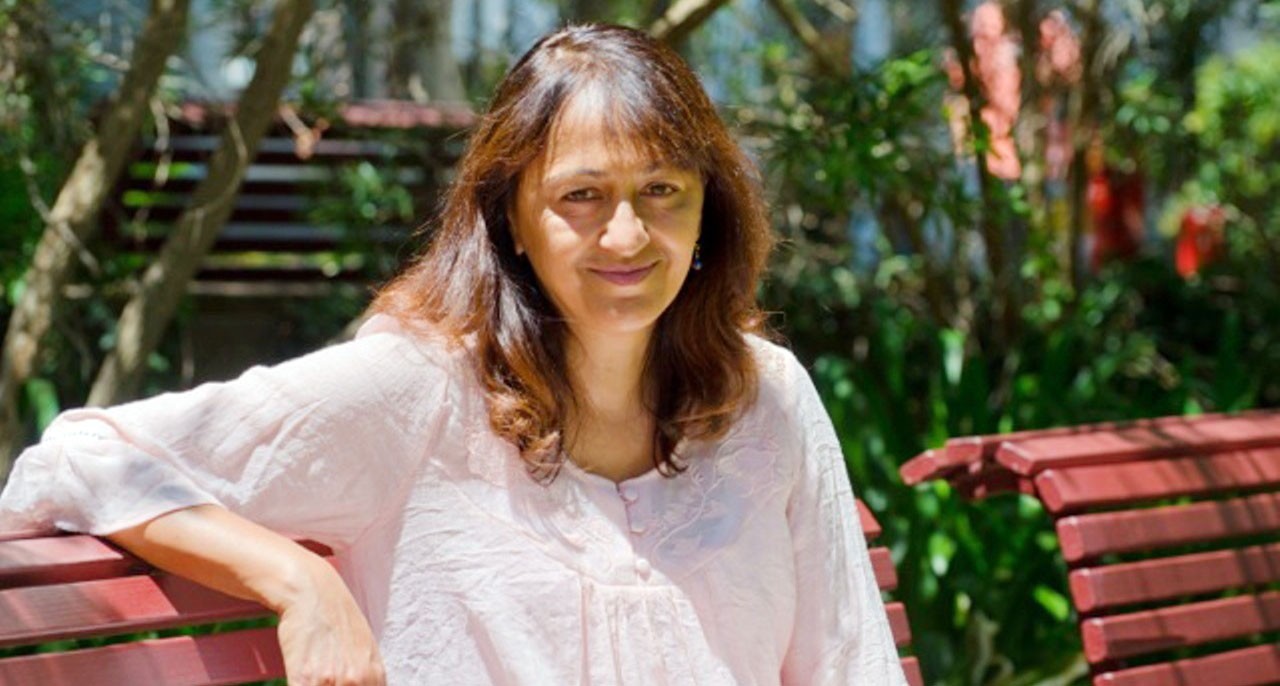 Author Rashida Murphy was born in India and has lived in Australia since 1985. Her poetry and prose has been published in anthologies and journals in Australia and overseas. On Equal Terms, her first novel revolving around family relationships, was published in 2002. Now she has finished writing her second novel The Historian’s Daughter, which is also about relationships and family, but this time against a backdrop of immigration and revolution. Her prize-winning short story I am in Jerusalem and it’s raining here was published in the anthology Where Two Ways Part in 1994. Murphy holds a Masters in Creative Writing from Edith Cowan University in Perth, where she is also currently completing her PhD.

The News on Sunday: Tell us something about your journey from your hometown in India to your home in Australia since the mid eighties. When did you start writing professionally?

Rashida Murphy: When I came to Perth in the mid-1980s as a young woman with a baby, I had no context for everything I was about to experience. I started writing as a way of understanding my new landscape, culture and experiences. I’d always written stories and essays as a child and as a teenager, but the stories I wrote in the early years in Perth were about my encounters with benign racism -- the kind well-meaning people inflict on you for your own good. You know, things like, don’t you have an English name? In this country it’ll be easier if you have a name people can actually pronounce.

Or the woman in the supermarket who told me women like me only came to her country to steal her job and her man. It was harder to deal with schoolyard racism; when my daughter encountered it as a child, teachers seemed ill-equipped to address it, advising me to move her to a school that was more multicultural in nature. However, by and large people were kind and curious and I guess I wrote myself into existence in a new environment.

TNS: Your first novel, On Equal Terms (2002) is about family relationships. What is your next one about?

RM: On Equal Terms was about family and relationships and I wrote it originally as a set of connected stories so that my daughter could read them when she grew up, to understand where I came from. It grew into a novella that I submitted for a Masters in Creative Writing. The novel that I’ve just finished writing is called The Historian’s Daughter and is also about relationships and family, but this time against a backdrop of immigration and revolution. The idea grew from my experiences as a teenager in India, when displaced young men and women from Iran, Afghanistan and Palestine started drifting into my hometown to study, work and settle. I write about what happens to people when their existence is threatened and what prompts women to behave in unexpected ways when they are confronted, cornered or silenced.

TNS: As an Indian-Australian, does identity and inter cultural displacements and such other issues form the main subject of your poetry and prose?

RM: Oh yes, I think that identity and cultural displacement are at the core of everything I write. Most of my published poetry and prose reflects my fractured identity and multiple selves. I’ve lived in Australia for more than half my life and at this stage find myself a visitor in the land of my birth, and that is an unnerving experience. I no longer intuitively understand the rhythms and intimacies of exchange that happen around me in India; I have to consciously tune in. And here at home in Australia, I am still regarded as an outsider, although now my exoticism is desirable rather than threatening. When I’m with my Australian husband, people tend to speak differently to me. When I’m on my own, shop assistants speak slowly and repeat themselves. Older gentlemen instruct me and regale me with stories about natives and coolies. Occasionally I’m surprised that I can be hurt by this. I am not angry - there are far greater horrors in the world that distress me and I wouldn’t want to waste my time dwelling on the daily negotiations of life when children are being killed and women cannot walk on streets without fear.

TNS: Among several other poems, you have written one titled May be. It spoke about children’s laughter and ancient forests, and is a delightful piece that takes you to so many places. Please share the poem and also tell us what inspires your content?

RM: Ah, it’s about a difficult time in my life. My first marriage had unravelled and collapsed. I was on my own with a teenage daughter with no money and no home. A job and the kindness of strangers and friends saved my sanity. No, I haven’t been to most of the places in the poem, just Mt Carmel in Haifa. The references to old places reflect the universality of difficult things. When we are utterly overcome we think no one could possibly understand the depths to which we have sunk. This poem, which ends, I hope, on a positive note, is for my husband of ten years, a man whose presence in my life reminds me of children’s laughter, ancient forests and luminous stories.

TNS: In Pakistan we now annually have three major literature festivals in three different cities. I believe there is a Perth Writers Festival. Tell us something about it.

I held my breath when we met.

You reminded me of olive groves and salty seas

Of mulberry trees formingcanopies in an orchard

Of children’s laughter and whispered secrets

Of ancient forests and illuminated stories.

You listened to me.

You looked at the shards of my life and said, I’ve been here too you know.

Eat cherries. Wear scarlet. Wait for the ease you promised.

Wait for the unfurling of leaves and the beat of moths wings.

Wait for the future. Wait for our lives.

RM: Yes, like in Pakistan, in Australia too, the popularity of Writers Festivals is growing. Every major city hosts one and there are regional festivals in small towns all over Australia. Because of Perth’s remoteness from the rest of Australia, the writing scene here is vibrant and the writing community extraordinarily generous and diverse. Several world class writers live in and around Perth and write about it. At the Perth Festival we have had Chetan Bhagat and William Dalrymple visit from India as well as appearances by talented local writers like Amanda Curtin, Annabel Smith, Natasha Lester. Tim Winton lives in Perth, as does Joan London. And as an aside, the former Nizam of Hyderabad also lives in Perth, although I don’t think he writes!

TNS: About your prize-winning short story Its Raining in Jerusalem … do you feel like writing about Jerusalem again in the present Israel-Gaza conflict scenario?

RM: I still haven’t been to Jerusalem, although I have visited Tel Aviv and Haifa. I like evocative landscapes that tell their own story, and setting a story within such a landscape means I don’t have to be very descriptive. I can focus on the inner life of the characters. I wrote this story after watching a news item, in which a reporter held an umbrella over his head in Jerusalem, and I was struck by what he said -- I am in Jerusalem and it’s raining here. That gave me the title of the story and the rest followed. I have written another story set here, titled, Next stop, Haifa. What is happening in Gaza currently is too horrible for me to process at the moment. I think I will write more stories set in this landscape because stories are the way we make sense of the insensible, a way of recording and bearing testimony.

TNS: Earlier this year, you completed a residency at Mumbai University, conducting onsite research with other scholars. How was that experience?

RM: The residency at Mumbai University did not work out as I anticipated at all. I was very glad I had Plan B to fall back on, and Plan B became the most amazing and uplifting experience I could have hoped for. I spent a week in the beautiful colonial town of Shimla, former summer capital of the British in India. The University of Himachal Pradesh hosted me here and I visited the oldest library in the country there, which was handy because my new novel has libraries as a theme and metaphor. I saw the room where the Freedom Treaty was signed in the gothic former viceregal lodge. I attended a convocation presided over by the Dalai Lama. In addition I presented a seminar and a workshop to academics, PhD students and visiting scholars. And it was here that my novel began to make sense, and my research became meaningful. I have written about my experiences on my blog under the title India Diaries.

TNS: You have been termed as a versatile blogger by Louise Allan, a writer and blogger herself. In one of your blog posts you have mentioned that you knit when you want to think, as your fingers are busy but not your mind. Do you also work out the structure of a story you may be thinking about -- its characters, etc while knitting?

RM: Do I knit and think? I suppose I do. I also weed my garden, walk the same road every day when I want to work something out. I guess any rhythmic, repetitive action that engages the senses and frees the mind can be conducive to thinking?

Writing my novel on a 3 year scholarship has been an enormous privilege and I know this novel wouldn’t have been what it is without the support I have received from the University and my writing colleagues. But I’m also looking forward to resuming a less intense and fraught life! If anyone needs a knitter or gardener after March next year, give me a call. I’ve had lots of practice!

I’d like to end here with the thoughts of Hannah, the narrator of my new novel, The Historian’s Daughter, which I hope to publish next year, after it has been submitted for examination.

The Magician makes sure we have starched school uniforms, nit-free heads, brown paper covered books, hand-knitted red cardigans and short nails. She feeds us all, several times a day, bestowing salted nuts and sweetened milk as treats on cold nights. When the lost boy arrives to share our lives, she tells us it’s God’s way of reminding us we have much to be thankful for. We thank Him for each other and for her and she makes us thank Him for the others. It is hard to be thankful for a captive aunt and a thunderous father but we try. She doesn’t belong here - in this dusty town where the wind whistles and snaps the sad trees in half - she looks as if she misses something she cannot remember - snow on a mountain and a blue domed mosque and a man and a woman with eyes like hers.

The interview was conducted via email.