"I will never go solo. Jal is here to stay." 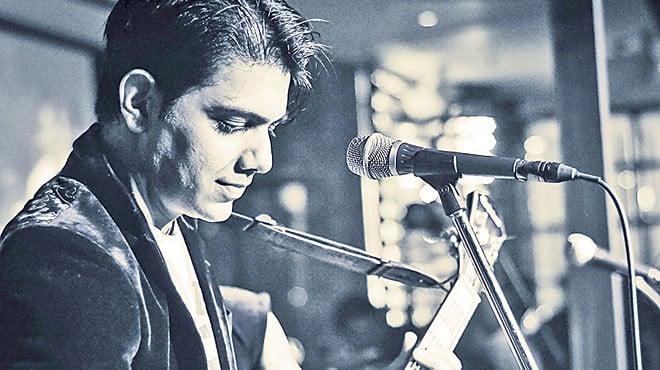 The silent force behind ‘Aadat’, that hit number from the early noughties, Goher Mumtaz now takes centre stage as he steps behind the mike to belt out pop rock ditties for Jal. Apart from doing double duty as the band’s vocalist and guitarist, Goher is also occupied with his acting career that helps him build the band’s fan base. In an in-depth interview with Instep, Goher details his experiences as both an actor and singer and tells us why Jal is here to stay.

Marching on with the band

Instep: After the changes that the group has gone through over the last few years, is Jal operating as a solo project now?

Goher: People thought the band was over after its ex-members decided to pursue other projects, but Jal is still here. I’m working with top session players for our live acts and TV show appearances. I am on lead vocals and guitars. Joining me are Saad Sultan on lead guitars, former MHB member Amir Azhar on bass, and Ken Zeerick on drums.

We have performed together all around the world, including the UK, Sharjah, Bahrain, Bangladesh, India, and in many cities of Pakistan, since 2011. Last year, we launched our new album Pyaas, consisting of 10 tracks, including the popular ‘Tanhai’ from my debut acting project and ‘Ik Arzu’ of Coke Studio fame. Jal has been nominated in the Best Band category in the Hum Awards and recently performed at the prestigious O2 in London.

I could have easily gone solo with my music and acting career and would have even stopped producing music, but I care for all the Jal fans, whose appreciation makes us tour the world.

Instep: So you plan to continue making music as Jal and won’t drop the moniker and start releasing music under your own name instead?

Goher: I will never do that. A band means band members, and we have a new line-up. We’ve been performing as Jal after Farhan left; nobody ever questioned the persistence of the name. If promoters, brands, and colleges want to call us Jal, why should I perform as a solo artist? Plus Jal is a brand in itself and inspired many school and college students to pick up guitars and start singing. We recently had a great time performing at FAST University Peshawar and in New Delhi and are looking forward to hitting Pakistani colleges and schools soon with songs from the new album.

Instep: Is it easier now that you’re the only fulltime member and solely in charge of the music? Or is it more challenging?

Goher: It is easier. Even for Boondh and Aadat, I did eighty percent of the work, but used to sing only two to three songs on the album. This time, the challenge was to sing the whole album and all of Jal’s previous songs for live performances. So I took the challenge and did it. During a concert in Bahria Town Islamabad on New Year’s, I remember one fan came up to me and said, "I salute you as I never thought you could sing so well live". Also, I am not exactly alone in composition. I discuss parts and improvisation with the other members, like Saad and Amir, and try to create a "band" sound. It is a lot more fun this way.

Instep: How was your recent experience of performing on The Floor?

Goher: The Floor is a revival of the pop scene in Pakistan. It was great to see mainstream bands performing on a show that’s airing on every music channel. It actually really helped Jal to promote its new album Pyaas by performing it live along with the old hits. It’s a great initiative.

Instep: Tell us about the recently released song ‘Pyar Hai’ from the soundtrack of Uff Yeh Mohabbat.

Goher: The song is one of the four tracks from Uff Yeh Mohabbat’s OST. I sent Hadiqa Kiani the composition with my vocals and she loved it and immediately said yes to the duet. I am humbled and want to thank her for doing this duet as our market also needs new, refreshing songs. We are all set for the new video and it will be out in September.

Instep: How was your experience performing on Pakistan Idol and meeting all the contestants?

Goher: It was amazing. I performed a folk song ‘Layian Layian’. It was great to encourage new talent and give them tips through this new platform.

Goher: Music. I am very picky about my acting projects.

From score to screen

Instep: You had been making music for many years before you ventured into acting. Did you always aspire to become an actor? Or did the acting projects just happen by chance?

Goher Mumtaz: Acting wasn’t planned; opportunities have been coming my way since the beginning of my music career. I’ve had a few offers from Bollywood, like a Tabu film that was offered to me while I was on tour with Jal in Mumbai back in the day. But I wanted to make myself available to Jal full-time; I wanted us to become the best band of the subcontinent.  I was also approached for a role in the Pakistani film Tamanna in 2011 but refused because I didn’t like the script.

Eventually, I thought I should not let every opportunity go by. If people think I should be a part of their movie or drama, then I should consider it as well. I finally signed on to do Hum TV’s Tanhai in 2012. That play did really well, although I personally think I could have done better as an actor. I was totally blown away by the feedback I received as even people who weren’t Jal fans also started recognising me. I think acting makes a great addition to my career. After Tanhai, I acted in Geo’s Uff Yeh Mohabbat, a musical serial in 2013, and now will be seen in Hum TV’s Bhanwar, which begins airing in the first week of September. I work hard on all my projects; since international tours also keep me busy, I only do one play per year instead of signing on to multiple dramas in an effort to be seen on every channel.

Instep:  You just completed the shoot for Bhanwar. What can you tell us about it? Goher: Well, Bhanwar is really quite an amazing story. We usually watching TV dramas that revolve around the problems of women, as a mother, wife, daughter, or sister, but this time the story tells us about the sacrifices a man makes when he has to live without his parents, the sacrifices he has to make over love. I am playing the role of a doctor, Umair. Neelam Muneer is the lead actress, and is joined by Firdous Jamal sahib in the cast. That’s all I can share about the play for now.

Instep: What difficulties have you faced as an actor?

Goher: Honestly, it was just the first two days that were difficult. After that, you start getting the hang of it. I took acting as a challenge and worked on my skills, memorizing the script, improving my expressions with tips from senior actors, and told myself that it should be done. Then it’s all easy. I feel that everything is achievable if you are determined.

Instep:  What do you think of the Pakistani television industry?

Goher: The Pakistani television industry is flourishing, as people don’t find many recreational activities out of the home, so they watch movies and dramas. Our TV industry is meeting their demand for quality TV, and I feel proud that now they can be seen across the border too. I think more educated people must come join this industry as producers, assistant directors, and set designers so that it can flourish even more. We have the best directors in the industry who can easily make a film out of a script and they will.

Instep: So TV is doing well, but what do you think of the Pakistani films coming out these days?

Goher: Finally the time has arrived when you genuinely feel like going to watch a Pakistani film! I am so proud of Bilal Lashari, who started his career by directing Jal’s music video for ‘Sajni’. Now alongside him, there are a lot of directors who have started making films. For instance, Main Hoon Shahid Afridi was a great effort; though I wish the Shah Rukh Khan element would have been avoided. I understand we don’t have resources like Bollywood, but then we do have stories like British films, which are made with fewer resources than Hollywood.

Instep: How do you feel about the work Pakistani artistes have done across the border? Are there any Bollywood projects you are currently pursuing or considering?

Goher: I am the brand ambassador of my country. I would never ever do something across the border, which could embarrass my fellow Pakistanis. I have been travelling to India for more than 10 years, and have performed in around 30 different cities. I make sure that Jal is introduced as a Pakistani band before we go on stage. We have won the Favourite Artist India award and Best South Asian band from India. If I am to step into Bollywood, I would prefer to work in an A-class movie, a movie that I can come back and watch with my family and a movie that Pakistanis can feel proud of. I am willing to wait for the right opportunity.

Sameen Amer can be contacted at sameen @gmail .com

"I will never go solo. Jal is here to stay."