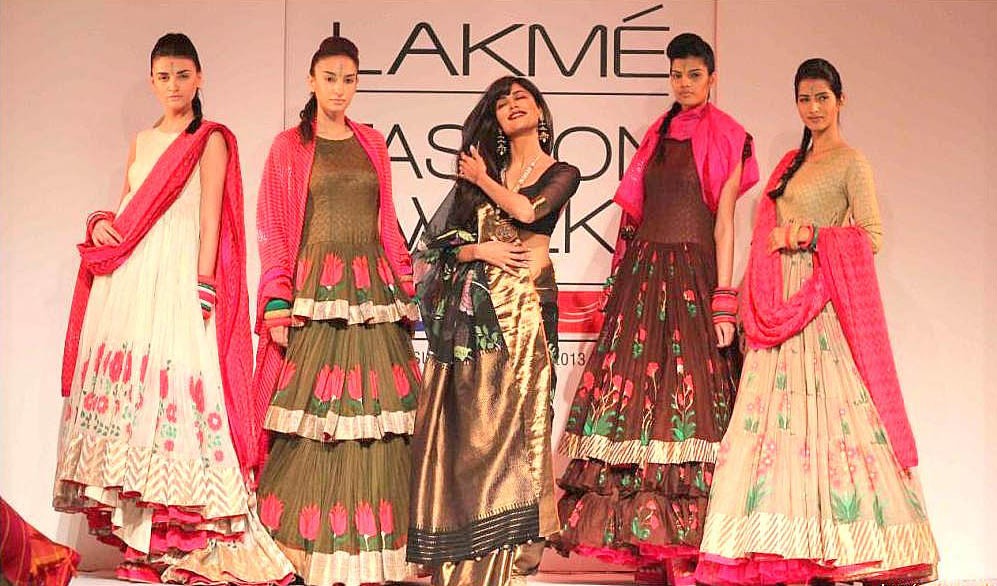 Fashion industry is taking steps towards cross border collaborations as a number of designers from both countries cross the border with their products.

Various exhibitions and exchanges take place from time to time largely as a result of the mutual interest attached for designers to work together as the two countries share the same culture dress.

This year, India took initiative in promoting this cross border exchange inviting four Pakistani designers to showcase their designs at The Lakmé Fashion Week, held in Mumbai at the Palladium Hotel from August 20 to August 24.

Zara Shahjahan, one of the four Pakistani designers invited over to India for the Lakmé Fashion Week, spoke to TNS about how cross country exchanges mostly occur on an individual level where designers from both countries either get an exclusive section in stores across the border or display their collections at exhibitions held in the neighboring country.

She says "India and Pakistan both have the same type of clothes but tastes and aesthetics are very different. As far as buying power is concerned, India is far ahead of us."

In 2012, the Pakistan Fashion Design Council (PFDC) launched its first exclusive store ‘PFDC -- The Boulevard’ in Delhi, to present and provide Indian consumers with a taste of Pakistani designs and patterns. The launch was followed by a fashion show, where 18 designers displayed three pieces each.

Before that, in March 2005, Bareeze launched its store in Delhi; the same month Asad Ahmed, a Karachiite, opened up his retail outlet by the name of Images in the same vicinity. Both the stores sell machine-embroidered dress material in a variety of colours and textures.

Some Indian designers have also acquired a large clientele in Pakistan. The Raymond Shop sells suits, jackets, trousers and shirts for men in Karachi.

More common, however, are Indian designers who get a section in boutiques that operate on a shop in shop concept. Designers Ritu Kumar, Tarun Tahiliani, Rohit Bal have their own sections at Ensemble which has branches in both Lahore and Karachi.

Other prominent Pakistani designers, such as Umar Saeed, Faraz Mannan, Shehla Chatoor, Faiza Samee, Rizwan Beyg, Sania Maskatiya and Nickie Nina have also taken their products across the border. Sana Safeenaz and Crescent Lawn also have a huge market for their textiles in India.

Zara Shahjahan told TNS, "Our lawns are extremely popular in India since they don’t produce the cloth there. Other than that, our embroidered fabrics and shoes also have a good market there. From India, Kashmiri shawls and Chicken Kaari is quite popular here in Pakistan. Overall, the exchange between the two countries is pretty much reciprocal I would say."