Travelling with a literary giant 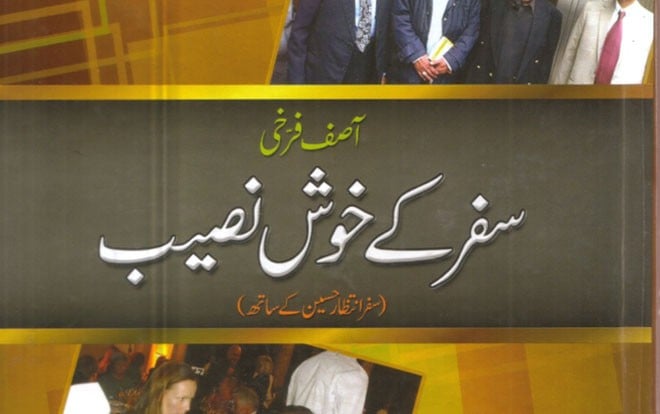 For centuries, landscape, culture and history of the subcontinent has been a source of inspiration for travellers from all over the world, including Fahiyan, Hsuan Tsang, Al Beruni and Ibn Battuta.

The land has been so rich and fertile that it has tempted only a few to explore the world outside. This contentment, perhaps, is reason good enough for not producing literature relating to travel.

Raza Ali Abidi, Raheem Gul and Mustansar Hussain Tarar are the prominent Urdu travel writers, while Ata-ul-Haq Qasmi, Qamar Ali Abbasi, and Farooq Khalid have also produced some worth-mentioning travelogues. Fiction writer and critic, Asif Farrukhi recently published a travelogue Safar Kay Khush Naseeb, which is a brief account of a journey in the company of the veteran Urdu writer Intizar Husain to attend a ceremony held in London this year. The event was organised by the committee of the Booker Prize Foundation -- to announce the winner of Man Booker International Prize 2013.

Out of the 10 writers, selected as finalists from all over the world, the award went to the American fiction writer Lydia Davis, who also has a reputation of being a brilliant translator from French, and other writers including Marcel Proust and Flaubert.

The travelogue is a comprehensive account of the authors’ engagements during his stay in London. The photographs included in the book add to the narrative and help the readers to imagine the grand ceremony which is held every two years, to award a prize worth £60,000.

Intizar Husain is the first Pakistani writer who has been considered by the jurists for the prestigious award. Earlier, the likes Chinua Achebe, Alice Munro and Ismail Kardare have received this award.

"Travelling with the luminous writer Intizar Husain and spend a few days observing his character was such a marvellous experience that I longed to write it down in some form. Besides, the journey was an excellent opportunity for me to be a part of a historical event. It was an honour for the country too," says Farrukhi.

While recounting the journey and his stay in London, the writer stylishly paints a grand panorama. Farrukhi is a seasoned fiction writer and he knows well how to build a narrative and keep the interest of the reader alive. But, briefness of the travelogue at times leaves the reader discontented. Clarity of expression, concise and fresh prose and sharp observation are some of Farrukhi’s characteristics.

Along with his writing engagements as a fiction writer, critic, translator and editor, Asif Farrukhi has been involved in organising literary festivals first in Karachi and now in Islamabad, under the auspices of the prestigious publishing house Oxford University Press for the last few years. "The idea of this initiative came from the Jaipur Literature Festival which is considered the largest annual literary event in India since 2006," he says.

We are also afraid of Asif’s getting too absorbed in the hectic engagement of supervision and nourishment of literary activities, to spare time to focus properly on his own writing commitments.

Hailing from a renowned and illustrious literary family, Asif Farrukhi made his presence be felt in early years of his literary career. In a short span of time, he succeeded in getting attention of both serious readers and critics. Around six collections of short stories and two of critical essays, along with a number of translations from English into Urdu and vice versa, are to his credit.

Still, his pen is fertile and energetic, and gives us hope of an array of good writings to come in future.

Travelling with a literary giant