The age of aspiration

From the size of their mandate to the character of the contestants, the regional aspect of their victory to the social groups that they targeted, the electoral victories of PML-N and BJP have much in common 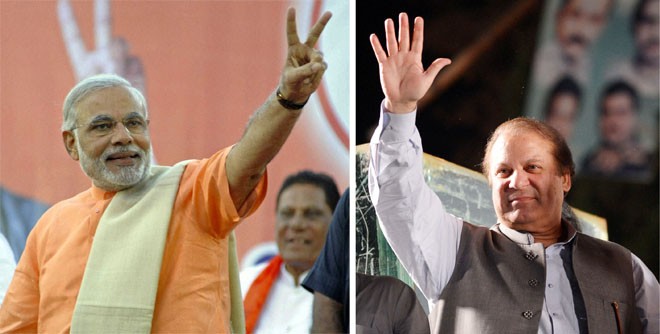 Soon after his stunning electoral victory, Prime Minister Narendra Modi invited his Pakistani counterpart, Prime Minister Nawaz Sharif, to the star-studded swearing-in ceremony. As the two rivals spoke afterwards, they soon realised an instant connection over a common talking point; how much both of them loved their mothers.

While this generated hilarious commentary on South Asian men’s obsession with their mothers and the dark side of this deification that chains women to patriarchy, it did not prompt further inquiry into an interesting chain of thought -- the two men did not just share a love for their mothers but much more than that. In fact, from the size of their mandate to the character of the contestants, the regional aspect of their victory to the social groups that they targeted, the two electoral victories have much in common and provide interesting insights into the evolving political economy of South Asia.

One can begin with the size of their victories. Both the PML-N and the BJP won resounding majorities in parliament, with the former capturing 129 NA seats out of 272 contested and increased its tally to 181 after including independents and reserved seats for women and minorities, which adds up to around 47 per cent of the total. The BJP on its own also won 282 of 543 Lok Sabha seats or close to 52 per cent of the total.

Further, it is also important to note that both the parties defeated centre-left, relatively ‘secular’ incumbents who were heading large and loose coalition governments where different interests had to be delicately balanced, a situation which furthered the perception of rampant corruption. On the other hand, the winners are both considered pro-business and centre-right parties known to have affinities to the far right.

The current impasse between the PML-N and PTI stems from the battle for hegemony over the Punjab as well as over the loyalties of the ‘neo-middle’ class.

The winners also have startlingly similar governance styles: Shahbaz Sharif is widely perceived as an ‘efficient’ administrator, with a highly centralised mode of governance, closely mirrored by Modi’s reputation as a man who does not care for ‘messy politics’ but ‘gets things done’.

The regional dynamic is another important factor. Here the PML-N was helped much more than the BJP, which still managed important breakthroughs outside the Hindi-speaking Northern heartland even though the centrepiece of its victory remained that particular region. The PML-N received 120 out of its 129 seats in Northern and Central Punjab (the GT Road belt) where it benefited from an as yet understudied rise of Punjabi chauvinism in the wake of the 18th Amendment, Kalabagh Dam as well as the issue of a Seraiki Province.

In fact, it is clearly the utter dominance of the Punjab in the federation of the country which explains the astounding win by the PML-N since a disaggregated view of the electoral results actually presents a highly divided mandate, with each province being run by different parties and coalitions. Finally, the PML-N was assisted (like the BJP) by the ‘first-past-the-post’ system, which can convert small changes in voting into large differences in seats.

However, the most fascinating aspect of the victories by both parties is the social basis of their campaign and programmes. Traditionally, the PML-N carried a coalition of the old industrial elites harmed by Bhutto’s nationalisation as well as the urban, mercantile groups that saw upward mobility during the Zia era. Similarly, till the mid-80s, the BJP (till 1977 known as the Jana Sangh) was widely labelled the ‘Baniya/Brahmin’ party and was restricted to the North Indian heartlands alongside ideological Hindutva cadres of the Rashtriya Swayamsevak Sangh (RSS).

The growth of the ‘middle-class’ in both countries supposedly helped the two parties create powerful coalitions to defeat their opponents. Now even though determining the exact boundaries separating the rich, the poor and the rest is an exercise fraught with complications of all kinds, it is nevertheless important to note that the ‘middle-class’ is by no means a homogeneous group. Furthermore, class is as much about a common sense of identity and differentiation from the ‘rest’ as it is about some functional relationship to income.

Nonetheless, an interesting term coined by team Modi prior to the 2012 Gujarat Assembly elections to disaggregate the ‘middle-class’ was the ‘neo middle class’. This was defined as those sections of society that had moved out of the ranks of the poor but were yet to stabilise as the ‘middle-class’. The group primarily comprised small farmers migrating to the cities and being rapidly incorporated into the process of urbanisation as well as sections of the urban poor who gained upward mobility through a decade of growth in the economy. They were characterized as ‘aspirational’, trying to convert their hard won private assets into better provision of public benefits - in short, a move away from plain roti, to shiksha (education), bijli (electricity), sadak (road) and paani (water).

According to a 2010 report by the National Council for Applied Economic Research (NCAER) the ranks of these ‘aspirers’ had expanded 12 per cent points in the last decade to 33.9 per cent of the total population. Paradoxically, this was a result of the success of the Congress-led government in achieving a high rate of growth (close to 8 per cent) for nearly a decade that cut the official poverty line from 38 to 21 per cent between 2003 and 2011. It was when this growth process stalled in the last 2-3 years and distributional conflicts intensified that large sections of this group of ‘not poor but not yet middle’, who were worst hit by the slowing down of growth, rising unemployment and high inflation, joined Modi’s right-wing, big business coalition.

This is by no means only true for India. While the Musharraf government’s consumption and debt-led growth strategy increased inequality in society, all analysts agree that as long as growth was high, poverty did decline. A study by the Pakistan Institute of Development Economics (PIDE) in 2011 using multiple indices like income, education, lifestyle, housing and occupation estimated Pakistan’s ‘middle-class’ to be 60 million strong (close to 35 per cent of the population), with Punjab having the highest ratio at 37 per cent. However, a crucial detail missed by most commentators in the data-set was that around 87 per cent (more than 50 million) of this 60 million was identified as vulnerable, fledgling, aspirant, or in other words, below what the study termed the ‘hard-core’ or solidly ‘middle-class’.

It would not be unfair to say that these groups correspond closely to the ‘neo middle class’ identified by the Modi government. These beneficiaries of the growth process, who had just emerged from the ranks of the poor, all of a sudden found themselves to be the worst hit by the fall in investment, the power shortages, the unemployment and the inflation that the PPP government had partly inherited from the Musharraf years, but was unable to counter. In fact, the PPP policies ended up making the situation far worse.

In Punjab, the decline in the newly attained prosperity alongside a perception that the government was tilted towards benefitting the ‘undeserving’ poorest, smaller provinces (the common perception was that the Punjab was worst hit by the power shortages, a point skilfully exploited by the PML-N), or just its own self, created a potent mix that decimated the PPP in the province and rode the N-league to a thumping majority.

Even the PML-N and PPP flagship welfare programmes are symptomatic of the social groups each was aiming to win-over; the BISP was a cash transfer programme aimed at the poorest in society at a time of stagflation while the PML-N’s youth loan scheme was clearly targeted towards those above the poor and aspiring to be upward mobile. In any case, these groups were a crucial part of the PML-N’s business led coalition.

The current impasse between the PML-N and PTI stems from the battle for hegemony over the Punjab as well as over the loyalties of the ‘neo-middle’ class. The two parties seem broadly similar in their ideological and social make-up which means the non-poor aspirants are subsumed under the tutelage of big business and the elite middle classes.

Such a coalition is hardly conducive to the long-term health of the aspirants themselves, let alone for a broad-based program of inclusive development and welfare that can uplift millions of our poorest citizens. For that to happen, the ‘neo-middle’ would need to be incorporated into a new coalition - a coalition of the poor that can tilt policy towards the vast majority. Only then will the age of aspiration be transformed into an age of prosperity for all.

The age of aspiration