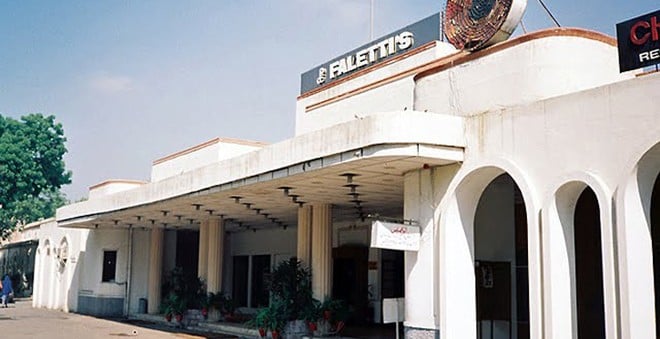 "I am a paka Lahoria (Lahorite) as I was born in Hotel Faletti’s Lahore," said Kaval Naen, the general manager of Mena House Oberoi Hotel, the most prestigious 5-star property in the shadow of the Pyramids of Egypt. Naen grew up with the Oberoi family and progressed in his career as the Oberoi’s hotel empire spread overseas.

He visited my office in Cairo with a very enticing proposal to transfer PIA’s cabin crew from the 3-star Novotel Airport Hotel to the 5-star Mena House Oberoi Hotel, situated adjacent to the pyramids of Giza. This contract built a fascinating bridge of similarities between the two historical hotels: Faletti’s Oberoi, Lahore, and Mena House Oberoi, Cairo. The living link, however, was Kaval Naen himself, who cherished his childhood memories of Lahore and had fascinating stories to tell about Faletti’s and Mena House.

Over the next two years that I stayed in Cairo as Manager PIA Egypt every time I would visit, Naen related an interesting story about the making of these two hotels and the great personalities that stayed in these properties.

According to him, an Italian entrepreneur, Andrei Faletti, who had worked in a hotel in UK, moved to Lahore after the British takeover of Punjab. He was so fascinated by the city that he decided to build a hotel and contacted a chartered architect’s firm, Anderson of Simla and Karachi, to turn his dream into reality. They, in turn, requested Bhai Ram Singh, probably the greatest architect and designer of Lahore, to help them build this unique property.

In 1880, the hotel was inaugurated by the then governor Punjab, Sir Robert Egerton, after whom we still have the road connecting Faletti’s to Simla Pahari. Faletti, like most Italians, was a romantic who fell in love with a local Juliet of Heera Mandi. But, unlike most Italians, he remained faithful to her till his death in 1905. He is buried in the graveyard of R.A. (Royal Artillery) Bazaar in Lahore Cantt.

Though the founder died over a century ago, his legacy in Faletti’s Hotel continues even today.

Mena House, on the other hand, was built by Khedive Ismail Pasha, the ruler of Egypt, as a hunting lodge for his royal guests. In 1869, it was expanded to accommodate foreign guests, including Princess Eugenie, considered the most beautiful woman of Europe, who was in Egypt to inaugurate the Suez Canal.

It was in 1887, however, seven years after the inauguration of Faletti’s, that the royal guesthouse was converted into the Mena House Hotel. It was named after Pharaoh Mena, the first of the 76 kings named on the famous Tablet of Abydos.

Being set against the backdrop of the great pyramids, one of the Seven Wonders of the World, gives the Mena House Hotel a winning edge over any other property in the world. However, Naen puts Faletti’s at the same pedestal as Mena House because of its unique architecture, ambiance, and romantic aura.

According to Naen, the most intriguing character linked to both these properties was a Sardar Ji from the Bhuan village, near Chakwal, in the Potohar Plateau. A young Mohan Singh Oberoi moved to Lahore after his father’s death and worked in a shoe factory. He was so fascinated by Faletti’s that one day he ventured into the no man’s land reserved for goras and maharajas.

As expected, he was humiliated and forbidden to enter the property. That humiliation had such an impact on his life that he decided to radically change himself by shaving off his traditional Sikh beard and discarding his turban. He moved to Delhi and took up a Rs 50 per month job as a waiter with Clarke, the owner of Clark Hotel. Thus began his fairytale ‘from rags to riches’ story.

In 1942, the Oberoi Group took over the entire company and the assets of the Associated Hotels of India that included Faletti’s Lahore, Flashman’s Rawalpindi, Cecil Murree and Dean’s Peshawar. These properties remained with the Oberoi Group till the 1965 India-Pakistan War. Thereafter, these hotels were annexed by the Government of Pakistan as enemy property and handed over to PTDC.

Meanwhile, the young boy from Bhuan had become the greatest hotelier with prime properties all over India, and in more than 15 foreign countries. At his death in 2003, Rai Bahadur M.S. (Mohan Singh) Oberoi was the most accomplished son of Potohar.

Seven years after losing four hotels, including Faletti’s Lahore to the Government of Pakistan, the Oberoi Group took over the Mena House Hotel in Cairo in 1972. They hired architect Amr El Alfy, the Egyptian version of Bhai Ram Singh, to redesign and renovate the hotel into the most modern property without compromising its original grandeur. The architect carried out an extraordinary job and turned Mena House from a luxury hotel to a dream world.

The renovated property held the Abu Nawas nightclub, named after the famous Persian poet of the same name who lived in Basra in 806. The hotel’s Indian restaurant, Mogul Room, served the best zeerapaani, and the most delicious Mogul cuisine. The guests enjoyed the reflection of the great Pyramids in the swimming pool and stunning dance performance of the most beautiful belly dancer, Fifi Abdu, each evening.

The Mena House Oberoi Hotel, Cairo, and Faletti’s Oberoi, Lahore, have been hosts to some of the great personalities of the past. It is said that one American tourist, while visiting the Pyramids, asked the guide, "Where did the Pharaohs stay while they supervised the construction of the Pyramids?"

To which the sharp guide immediately replied, "Surely, at Hotel Mena House, Madam."

Across the sea, the Faletti’s did just as well, boarding guests such as Muhammad Ali Jinnah, who stayed at the property in 1929 when he came to Lahore to argue the case of Ghazi Ilmuddin Shaheed. Other notable guests included, Pandit Nehru and Sarhadi Gandhi Khan Abdul Ghafar Khan. For Justice Cornelius, Faletti’s was a home where he remained in Suite Number 2 till his death in 1991.

While the film cast and crew of Agatha Christie’s Death on the Nile stayed at the Mena House, stars of Bhowani Junction (Ava Gardner and Stewart Granger) stayed at Faletti’s. Other stars that stayed at Faletti’s included, Marlon Brando, Raj Kapoor, Dilip Kumar, and Muhammad Rafi.

Unfortunately, two heritage properties, Dean’s in Peshawar, and Cecil in Murree, have been razed to the ground and replaced with ugly plazas and apartment buildings. The fate of Rawalpindi’s Flashman’s awaits the winner of a tug-of-war currently being battled between the Cantonment Board and PTDC (Pakistan Tourism Development Corporation). I sincerely hope that whosoever wins the battle has the sense to save the national heritage like it has done in the case of Faletti’s.