Punjab -- the battleground for hegemony 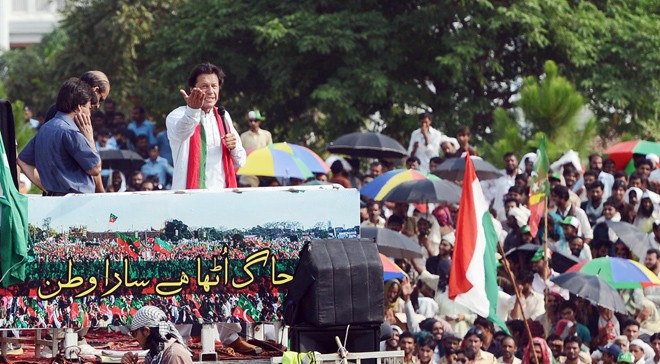 It is important, as certain analysts have argued, to keep in mind the military establishment’s central role in the present crisis. Just as the judiciary, and to a lesser extent Nawaz Sharif, helped to reign in the PPP coalition government and weaken it considerably (a government that was much weaker than the present one in any case), it has now unleashed Tahirul Qadri and Imran Khan to cut Nawaz Sharif down to size.

Important as this analysis is, it nonetheless assumes that all the other players are mere pawns with no agendas of their own; something that is at least definitely not true for Imran Khan.

There are two factors absolutely central to explaining Imran Khan’s unbelievably aggressive overtures in the last few months that have culminated in the present crisis: the role of the Punjab in Pakistan’s federation; the social basis of the two parties -- PML-N and PTI.

This election demonstrated clearly that a government could be formed with a heavy majority solely by sweeping the central Punjab belt, the seat of power in the country. With the PPP effectively out of the picture (it seems they can potentially only make a comeback if a southern province is created in the Punjab, a front on which not much seems to be happening at the moment), the field was open for an opposition to the PML-N in the Punjab.

If one observes the PTI strategy in the past five years, even with the PPP leading the coalition government, Imran Khan’s eyes were set on the Punjab from the very beginning. This is why it was the PML-N, the parliamentary opposition party, which bore the brunt of his ferocious criticism; the PTI claimed that PML-N’s (or ‘Noora’ league as he affectionately referred to it) ‘friendly opposition’ to the PPP was proof that it was the pillar on which President Zardari’s so called ‘coalition of the corrupt’ was erected, and that he alone represented the true opposition.

When Imran Khan says that he has the support of the wife and children in the same household where the father votes for PML-N, in a large number of cases this may literally be true.

It was still not strong enough to dislodge the PML-N’s deeply entrenched roots in the Punjab. While both parties were lenient on the religious far-right and so were allowed to campaign freely, it was the far more experienced PML-N that predictably emerged victorious.

Even though the PTI formed government in the KPK, Imran Khan’s one point agenda, making his way to the Prime Minister’s House, can only be fulfilled via GT Road, the PML-N citadel. This makes the current confrontation particularly nasty, and ignites fears in the minds of many of a return to the ‘politics of the 1990s’.

While certain parallels may be drawn to the 90s, there is one important difference. Alongside sections of the middle and upper classes fed up with the stifling atmosphere of the Zia years and wanting a return to democracy, the PPP’s differentia specifica was a substantial representation of the urban and rural poor in its organisation, ideology and politics (and to a considerably lesser extent, its policies) against which the primary beneficiaries of the Zia era, the old and the new moneyed classes coalesced and eventually chose Nawaz Sharif as their representative. However, nearly two decades of neoliberal reforms have further eroded the power of the poor (only 3 per cent of the labour force is unionised) who remain a disorganised, segmented and serialised mass, while redistributing a greater share of the income towards the middle and upper strata.

Freud famously coined the concept of the ‘narcissism of small differences’ which refers to the phenomenon of communities that are most alike often displaying the greatest animosity towards each other. The irony in the current battle for the ‘hearts and minds’ of the Punjab is that it is not a struggle between representatives of capital and the working population but essentially a fight to win over the same social group -- the middle and capitalist classes.

When Imran Khan says that he has the support of the wife and children in the same household where the father votes PML-N, in a large number of cases this may literally be true. Of course, these elite groups can be dis-aggregated into their various factions -- the urban-trading groups behind the PML-N or the ‘new middle classes’ of professionals behind the PTI. But given Pakistan’s family-centered political economy where elite reproduction takes place through kin and caste, these seemingly different occupations overlap within the same families. In any case, all sections of the elite can safely be differentiated from the mass of the poor, once constituting the active and now defunct support base of the PPP.

No matter how the government emerges from the present stalemate, the core issues at the root of the crisis will not disappear anytime soon. The battle for hegemony in the Punjab is going to be long and tortuous.

Punjab -- the battleground for hegemony