Now in its third year, the Young Writers Workshop made the participants consider writing as a serious, worth-pursuing career through some rigorous reading and writing sessions 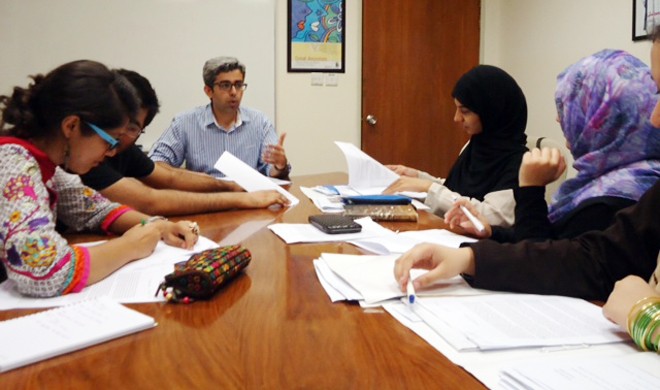 All self-help books on writing seem to suggest that writing is a basic instinct just like the instinct to eat or drink; it then becomes easier for them to proclaim that anyone can write.

Instinct or not, the practical question is: can you eke out a living with writing alone in today’s world where a lot of people are turning to arts as a career; especially when there are myths about writers or artists as destitute people who resort to burning their manuscripts in the cold to warm their hands.

What the five-day long LUMS Young Writers Workshop did for most of its participants was that it made them consider writing as a serious, worth-pursuing career. This year five participants were chosen to be a part of the fully-funded residential workshop. Organised by the LUMS Social Science Department, the workshop is basically Bilal Tanweer’s brainchild. Tanweer teaches Creative Writing at LUMS and is the author of the book, The Scatter Here is Too Great.

Now in its third year, the workshop has become a well-known event in student circles. Out of the five participants, three came from Karachi and two from Lahore. Selected on the basis of their writing samples which comprised short stories, these participants received feedback on their work along with writing assignments that had to be submitted. Their own feedback regarding the five days was that it was intense; and they had never written this much and this regularly in their lives. Three of them said that before coming to the workshop, they had never thought they could be professional writers, but "now they felt this was a possible choice".

The workshop’s format consisted of discussions for three hours in the morning. Then the participants broke up to write. Some of the books they discussed were Milan Kundera’s Laughable Loves and Gabriel Garcia Marquez’s Chronicles of a Death Foretold. They also read Flannery O’Connor’s short stories. The interesting thing was that all these reading exercises were used as jumping grounds for writing assignments. One assignment based on Kundera consisted of re-writing a Kundera story with a female character’s consciousness. Another included using the con-mans and swindlers by O’ Connor and trying to write a story about one of them. The third assignment was about creating a sense of place about a place well-known to the writers.

The workshop’s format consisted of discussions in the morning. The participants broke up to write. Some of the books discussed were Laughable Loves and Chronicles of a Death Foretold.

The assignments sound imaginative but whether the participants could do justice to their themes is open to question -- mainly because not every type of writing will come from the heart, especially in a workshop environment. In a TED Talk, Elif Shafaq had said that writing for her was fantasy: it was creating stories about lands far away using her imagination. But, in most cases, writers write about themes they know well. For instance, Natalie Goldberg says your family is a good place to start. Even then one feels that, for an imaginative young person, handling the assignments will be good writing practice because the parallels they can draw on come from literature itself.

Other than the written assignments, the workshop had an excellent focus on reading texts and critiquing them as minutely as possible. This emphasis led the participants to notice the fine print and see how the writers’ minds were showing up on the page. A good writer shows a story and tries not to tell it. There was a lot of emphasis on reading through the facts. Tanweer came up with the example of a phone directory: it has all the facts about a community but no narrative to tell the reader what is the community like; is it a God fearing one or does it fear its neighbours more than God? Only the writer can show us the truth hidden underneath the facts, he said.

One does not know if any of these five participants will go on to become a published author. But they all seemed to talk about the intensity of the critiques they got on their written assignment. According to them, it made them realise how much goes into one good page of writing; how destructive is purple prose; the virtues of writing good language, bare of hyperbole and not sprouting adjectives right, left and centre.

Writing workshops if done right allow people to see that good writing does not happen in a day; it takes relentless reading and writing to be able to write well.