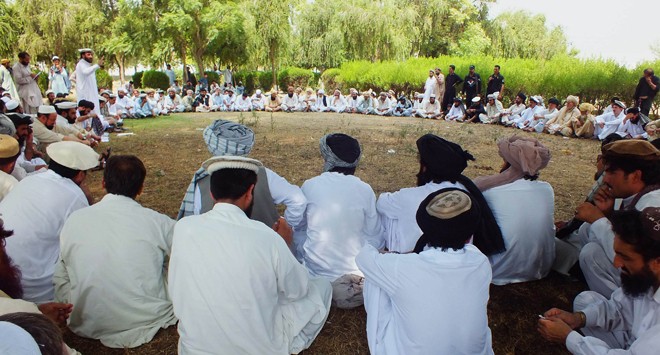 It appears as if the state is again out to add to the miseries of tribal people of the borderland region. There is a growing talk of political and judicial reforms in FATA. For this purpose, the governor of Khyber Pakhtunkhwa has established FATA Reforms Commission (FRC) to frame a plan for the next 25 years. It is, however, not yet clear what reforms and for whom?

History acts cruelly if its lessons are not learnt. It punishes our ignorance through its spectral recurrence, akin to how the suppressed content of memory produces haunted dreams. In short, those who are oblivious to the lessons of history are bound to live in preordained time.

A recent ruling of Peshawar High Court (PHC) vis-à-vis the administration of justice in the Federally Administered Tribal Areas (FATA) indicates just how little we have learnt from history. The PHC has instructed the parliament to amend the Constitution in order to bring FATA under the jurisdiction of superior courts.

Two decades ago, a similar decision was passed by the Supreme Court decreeing that customary tribal courts in Swat and other Provincially Administered Tribal Areas (PATA), overseen by local elders, were no longer legally valid, and had to be replaced by official courts and Pakistani civil laws.

In retrospect, it is easy to understand how the court ruling proved an opportunity for the then newly-established Tehreek Nifaz-e-Shariat Muhammadi (TNSM). It created a political and legal vacuum which the TNSM effectively availed by launching violent protests to demand the enforcement of Sharia laws.

The region was already undergoing deep turmoil owing to the abolition of self-rule of the princely state; an ill-planned political and legal transition was underway. Before the merger of Swat state, the system of political power and law was a blend of monarchic authority, and customary codes and institutions.

History tells us that such confusion and distant authority in conflict ridden factional societies always gives way to anarchy and ruthless struggles for domination.

The majority of local people still consider that judicial system better than what replaced it with regard to efficiency and delivery of services and justice. It was considered consistent with local conditions and norms. Indeed, the traditional system was established after a prolonged period of relative anarchy amidst mass struggle against the British colonialism in the late nineteenth and early twentieth century.

As a matter of fact, the British colonial administration had to concede the demand for internal regional autonomy after the partial failing of the Ambala military campaign in 1864-65 and, later on, the Malakand uprising in 1897. Charismatic religious figures coordinated and led different tribal militias in both instances.

The colonial state was thus forced to acknowledge the potency of millenarian ideologies amongst Pakhtuns, particularly when faced with the threat of foreign rule. Therefore, it not only avoided further military incursion but also tacitly supported the process of state building in the region. The rest of the story is well known. The region experienced unmatched peace and prosperity under the short period of self-rule.

The abolition of Swat and other frontier states in the late 1960s precipitated sheer confusion and hardships. The region was made a provincial territory under the PATA Regulations. However, effective control was invested in the central authorities. Similarly, all old laws including orders, rules, notifications and customs were kept intact but their interpretation was left to the provincial bureaucratic machinery.

History tells us that such confusion and distant authority in conflict ridden factional societies always gives way to anarchy and ruthless struggles for domination. It was exactly this confusion and dissatisfaction among local people combined with misplaced state priorities that the TNSM and, later on, Swat Taliban used to rally popular support for their political agenda.

The case of FATA is not much different. The region is already suffering from state and non-state violence, drone attacks and the breakdown of social order. The latest addition to the historic and collective tragedy of the Pakhtuns is a large-scale involuntary displacement.

The status quo in Pakhtun tribal borderlands is unacceptable. However, any change that does not take into account the following imperatives is certain to cause further catastrophe.

First, we should move beyond the colonial imagination of the tribal borderlands as a buffer between the savage and the civilized world. Before the advent of colonialism, these tribal regions were relatively open spaces serving as the main land routes for regional trade and mobility. The British colonialism reconstituted them as a buffer zone and closed geographies.

Second, the mobilisation of religious identities as an instrument of state policy is a double edged sword. It not only has the potential to unleash violence but can also metamorphose into an archaic form of Pakhtun nationalism.

Third and last, there should be the recognition of tribal sovereignty and internal autonomy. The liberal notion of the rule of (state) law that originated from Europe and then transported to colonies in the nineteenth century has long been resisted by Pakhtun tribesmen. The spectre of colonial history would continue to haunt the tribal borderlands unless the right to improve their judicial system according to their own indigenous formations is not recognised.