On the August occasion

The festive spirit is in the air 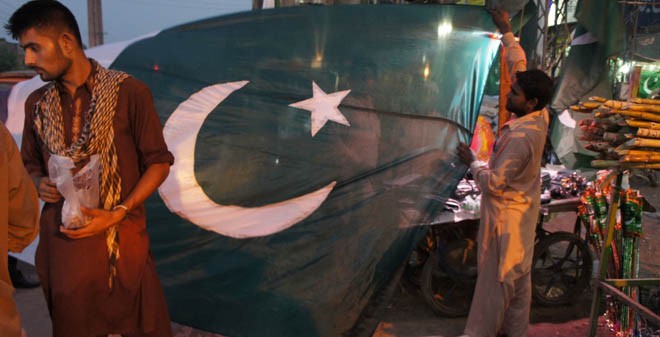 The spirit of festivity seems to have taken over the inner city of Lahore as one could feel the energy in the air, while entering the crowded streets of Urdu Bazaar and Istanbul Chowk.

Flags waving on either side of the roads were an evident indicator that preparations had begun days ahead of the Independence Day. The streets were flooded with a large number of men setting up their stalls of various types of patriotic artifacts outside small shops and famous feasting places. Young boys excitedly gathered around the stalls as auto rickshaws passed by with their backs painted with green flags and heart wrenching nationalistic slogans. Passing by Istanbul Chowk, the entire road was swamped with large posters and banners of leaders such as Allama Iqbal, Muhammad Ali Jinnah, Raja Ghazanfar Ali Khan and Raja Sahib Mahmood Abad. The Government District House was draped in flashing green and yellow lights. The inner park, which hosts the memorable fighter plane of Brig. M.M Alam was also beautifully adorned. As one walked closer to the building, both sides of the road were engulfed with zealous patriotic and religious slogans and flags.

When asked what it is about August 14 that makes it a cause for such extravagant jubilation amongst the whole nation, the people passionately explained how their forefathers had lost their lives in the freedom struggle and must be commemorated.

They said how freedom for them entails the right, both social and political, to have free and dignified access to all public places, to publicly share and indulge in their cultural traditions and values and, above all, to openly practice and propagate their Islamic faith. Pakistan, they feel, provided them with the nurturing security and commonality of ideology to do all of this in fearlessness, with a reassuring recognition of shared ideological affirmation from their fellow citizens.

As a young man told us, "Yeh Pakistan hee hai jiski wajah say hum aaj azadi say ghoom saktey hain". It gave them a place where they could not only live according to their beliefs, but also which they could govern according to their own cultural and religious values and they therefore wholeheartedly celebrate their Independence Day.

Aside from the historical and ideological significance attached to the day, August 14 continues to serve as an important source of earning for many Pakistanis. Small scale retailers eagerly wait for the day since it provides a boost to their average earnings as a result of the indulgent and celebratory mood of the otherwise frugal population.

Stall boys selling green badges, banners and flags fervently anticipate the day throughout the year as it forms a significant part of their income. Local street vendors selling various ethnic food items such as ‘kulfi’, ‘samosa’, ‘aloo chaat’, ‘paapar’, ‘channay’ and ‘golas’ also explained how their sales increase as a result of the festivity of freedom. Even the Qingqi drivers and ‘dhol walay’ seemed thrilled at the nearness of the day. "Abhi [14 August] ayegi toh kam say kam paanch sahab humein gaari main bitha kay Mall Road ley jayenge. Bohat paisey bannein ge," said a ‘dhol wala’, when asked what he felt about the approaching day.

When asked how they celebrate their independence day, there was a robust reply from almost all the young boys standing at the stalls and the small shops saying they enjoy it with their family or go out and eat in restaurants. Food seemed to play a significant role in the festivity: upon asking one of the men standing at the stalls regarding what most people buy on celebrated day, he told us that most women prefer buying green and white bangles, while the men mostly prefer buying huge flags, badges and slogans. Others told us that they see most young boys riding heavy bikes, driving fast cars and chanting patriotic slogans at the top of their voices. One old woman selling ‘daal chanaa’ at Jinnah Library said that she sees most youngsters playing trumpets, families enjoying in the Jinnah Park and feasting on biryani and niharis.

The fact that this day is a holiday was another popular answer. On asking as to what significance does the holiday hold for them, they replied that it gives them some time to take a break from their hectic and rigorous routine, and spend a day with their loved ones.

One stall boy in Urdu Bazaar was asked, "What does Pakistan mean?" He answered that the meaning of Pakistan is "La ilaha ilalah." For them, the idea of identity is attached to their birth and life thereafter in this country.

On a graver note, there were many on the roads who responded with blank stares or empty expressions. This marginalised and deprived part of our society, struck by poverty did not even have the privilege to know what 14th August is or what the term ‘azaadi’ means, forcing us to revisit the question of whether or not we were fulfilling the responsibility that landed on our shoulders when we first succeeded in achieving a separate homeland.

Heralded by the call for national obligation, the masses responded by graciously setting aside their personal grievances arising from economic, social and political injustices, jubilantly uniting under the shade of the green flag and proving that love for their homeland comes before love for self.

A police officer added that due to the negative sentiments seeping through the entire nation because of the ongoing operation Zarb-e-Azb, the Punjab government has announced excessive festivities to bring the entire nation together.

On the August occasion