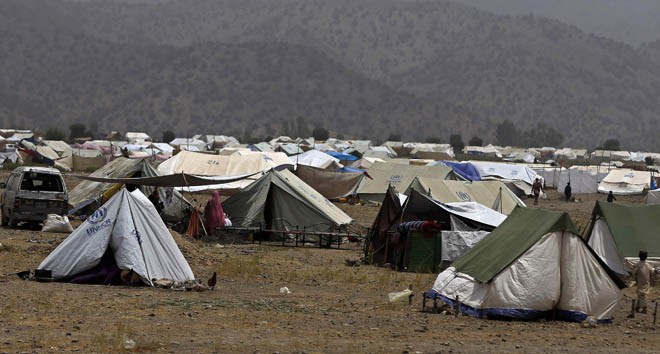 That seemed to be the adage on the lips of every displaced person I had the pleasure of meeting in Bakkakhel (the location of the IDP camp outside of Bannu) this past week. It was said in Urdu and in Pashto. It was said in the tired and broken tones of an old man who has seen too much and lost even more and it was said with the hopeful optimism that only children can muster in the face of great adversity. But it was all that was said.

I had the distinct pleasure of meeting a man and his three-year old son from the town of Mir Ali in Waziristan. As I and a few of my friends asked him about the life he had left behind there was not one of us who didn’t wonder how any human can have the resilience that this man and every one of his companions had displayed.

He told us about the life under Taliban rule, describing it as harsh and difficult. Yet when we asked him about how he felt about the Army’s operation and government rule, what he told us was even more upsetting. He told us that he wanted peace, and when the army was done, there would be none. The government would forget them as it had forgotten them before and there would be no justice, no peace, just a world where might is right.

And yet, he said, when anti-terrorist sentiments are on a high, it would be him and his family and his people who suffered. What had he done that people born near terrorist centres in Pattoki and Muridke had not, he asked us.

We had no answer, but to look at him, ashamed.

All he wanted was peace, and he would take the Taliban’s tyrannical peace over the Pakistan Government’s nothing.

As evidence, he pointed to his son who was recovering from a simple appendectomy that had been performed so crassly that it looked rather more like it had been performed by a witch doctor’s assistant. His belly had been incised end to end, and the wound was blackened and looked like badly stitched leather, not the skin of an innocent three-year old.

I’d have liked to spend more than the few hours I spent in the ghost town that was once Bannu, but even in the time I did get to spend there changed how I saw the people of Waziristan.

I thought, as an educated, fairly well informed teenager who’s seen his not-so-little bit of the world, I understood the adversity that the people of Waziristan have to face.

Simply imagining just how difficult it is to live in a desert-like region, with limited medical facility seems harsh. When I actually saw it, I realised that it was significantly more difficult than I had imagined. But it’s not just these conditions that the people of Waziristan have to face. For over two decades, they have been made to choose between subservience to the savage tyranny of the Taliban and losing their lives and their loved ones.

In spite of that, they remain hopeful. They have not given up on peace. If that isn’t admirable, I don’t know what is.

The people of Waziristan have more cause to hate us than most. We have everything they do not -- peace, security, more than just bare necessities and the opportunity to do or be more or less whatever we want. They have none of those, and now many of them are living in tents in a refugee camp a bare 15-minute drive from a battleground that once was their home.

Yet they received us warmly, even lovingly, and talked to us with candour that we had no reason to expect. A few of the kids even tried to teach us Pashto, though we weren’t the easiest of students.

At the end of it all, there was not one of us who didn’t feel ashamed of ourselves for not having done much more for these people. We felt ashamed for being able to pick up and leave when we grew tired and go back to our homes and leave these people to face whatever may come.