Can China and India overcome deeper strategic differences and distrust in their relation under the Modi’s leadership? 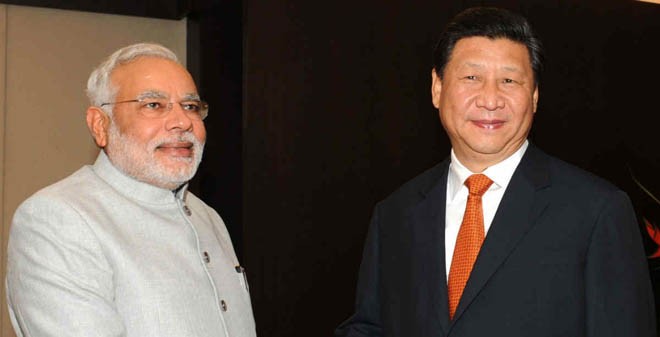 The mood in ‘Modi’s India’ is euphoric. India, under electrifying leadership of Modi, is eyeing a more decisive role in international affairs. In fact, the stage has been set well for a bolstered Indian role on the regional level.

Modi, once known for the Gujrat massacre, who was denied visa by the United States for poor record of human rights as CM Gujrat, is suddenly popular with foreign leaders. The newly elected prime minister of the world’s largest democracy is now deluged with invitations. President Obama and British Prime Minister David Cameron have invited the Hindu nationalist leader to visit, and Angela Markel spoke with Modi on phone to invite him to Berlin. The Chinese foreign minister’s visit was the first of high-level meetings between Modi administration and the world outside.

In other words, the leaders of the great powers are courting Modi; who has set out to redefine India’s standing in the world. In fact, some writers and analysts have labeled Modi as India’s Nixon.

The international community is closely watching the developments in India. The mandate received by Modi is the largest in the last 30 years in India. The local electorate has bestowed Modi with a decisive mandate to boldly address the most pressing issues at hand. The prime minister has promised the masses a new era of development.

However, India is mired in conflicts with its neighbours who halt its rise to the stature it aspires for. Therefore, it is prudent on behalf of Modi to reach out to the neighbours. In this regard the visit of the Chinese foreign minister has generated a new euphoria in the Indian media.

The search for economic development may not resolve the border disputes in which both the countries stand locked since 1962 and more importantly Tibet will keep clouding the Sino-Indian relations.

The relations between India and China were marked by mutual distrust. As per Indian media reports, now there seems a determination to add new content and substance to the Sino-Indian relationship and to discover the massive buried treasure of cooperation on bilateral, regional and international issues. The visit included a discussion on all perennial engagements between China and India including border issue and economic ties. The talks were constructive, cordial and aimed at strengthening relations between "partners in long-term strategic cooperation".

India is also eyeing to reduce the 40 billion trade deficit with China through greater market access. The initiative by China has further inflated the sense of importance of the Indian leadership. Peaceful cooperation between the Asian giants is imperative for a peaceful Asia. As the Chinese saying goes "The journey of 1000 miles begins with a single step" and that step has been taken by the Chinese foreign minister.

The Indian euphoria is highly inflated in the aftermath of this visit. The Indian media and policy analysts’ high expectations that this is a ‘new beginning’ and that ‘new momentum’ would be added to forward movement of India-China relations is not supported by prevailing strategic realities or China’s military actions on India’s northern border with Tibet.

The search for economic development may not resolve the border disputes in which both the countries stand locked since 1962 and more importantly Tibet will keep clouding the Sino-Indian relations. The current political outreach by China largely stems from its perceived isolation thanks to its aggressive actions against several countries in South China Sea and East China Sea.

The calculation in Pakistani diplomatic circle should be clear; China and India have deeper strategic differences and distrust in their relation than strategic consensus. Both are rivals for regional leadership. The history reveals that both often adopt postures that are detrimental to the interests of the other. Therefore, the Indian euphoria is highly misplaced.