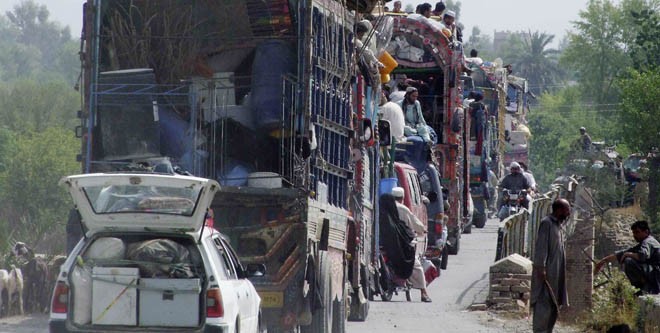 Exile is being eyeless in Gaza. The phrase ‘eyeless in Gaza’ is from John Milton’s poem, Samson Agonistes, which narrates biblical story of Samson, who was taken to Gaza by the Philistines. Samson was forced to work there in a mill with his eyes cut out -- a tragedy per se.

To experience exile is to tread the tragedy. The cross and calamities attached to it are cataclysmic. The loss is unsurmountable. Prophets cried when it happened to them. People perished when they were banished in the days gone by. What possibly can replace the sense of belongingness? What can heal the scars of solitude? Can metaphors and tales express the personal loss? Can words cure? Theodor Adorno, a German philosopher and an exile himself, did not think so. "To write poetry after Auschwitz is barbaric", he famously wrote in 1949 after WWII.

Gone are the days of the Holocaust, exodus, and horrific wars, they tell us. Humans are safer than ever, they proclaim. And then, global refugee figure passes 50 million for the first time since the Second World War, UNHCR report claims. Among them, 16.7 million people are refugees, 1.2 million asylum seekers, and a record 33.3 million are Internally Displaced Persons who are homeless within their home countries.

During the latter half of nineteenth century, the crumbling empires gave way to the nationalist strides. Mazzini and Bismarck et al. embarked on a mammoth undertaking in Europe and soon nation states emerged on the world map -- readily manageable within the framework of bourgeois liberalism. The strong sense of shared history, culture and language gave rise to the indomitable notion of ‘us’. Every living thing on earth outside the realm of ‘us’ was considered as ‘them’. The predicament of the contemporary refugee is manifold in terms of not being the part of ‘us’ nor ‘them’. 50 million people, at the moment, are living in a void between these two extremes -- a midway space where nihility reigns.

A sovereign state is an inevitable upshot of contemporary nationalism. This is where the Zionist claim of taking a territory and setting up a sovereign state for a people of shared religion and history, went hand in hand with the demands of modern nationalism.

The predicament of nationalism, however, lies in the paradox that by asserting a certain unalienable identity, it ultimately gives way to the nationalist aspirations of the group of the people who refuse to assimilate for one reason or another. The question that why the people who themselves were called the people of exile by the history herself, have rendered 5 million Palestinians homeless, may very well be understood inside this framework. This is where Sabra and Shatila come in. This is where the scars of Gaza dwell.

Edward Said wrote about the age of the refuge in his highly influential book ‘Culture and Imperialism’ in 1993.

"[S]urely it is one of the unhappiest characteristics of the age to have produced more refugees, migrants, displaced persons, and exiles than ever before in history, most of them as an accompaniment to and, ironically enough, as afterthoughts of great postcolonial and imperial conflicts. As the struggle for independence produced new states and new boundaries, it also produced homeless wanderers, nomads, and vagrants, unassimilated to the emerging structures of institutional power, rejected by the established order for their intransigence and obdurate rebelliousness."[p. 332]

People have never been homeless en masse within their homelands before. What are IDPs if not the unfortunate souls stuck between their burnt homes and barbed wire national boundaries? They cannot trespass the barbwires and they cannot go back home -- clinging to both the hope and the hopelessness, standing bewildered and devastated. Who are these 33.3 million if not the middle children of the soulless soils that virtually own them in the name of nationhood? They are people of the ageless autumn that offers them the nostalgia of shinning summer and the false promises of warm winter.

The ongoing military operation against the Islamist militants in North Waziristan has caused massive displacements. The overwhelming support for the operation by the segments of the society which so far were even reluctant to name the Taliban manifests the fact that this is state, and not religion or people, which calls the shots.

Humanist perspective is largely missing from the prevalent discourse about Syria, Palestine, Iraq, Pakistan, Afghanistan, Somalia and other conflict ridden regions that constitute a large chunk of people who have been made homeless. Palestinian refugees who are the victims of imperialist designs share the same agony as those Arabs who were made homeless by the brutal regimes.

IDPs of Pakistan feel the same pain as the people of Iraq who had to flee the terror unleashed by Islamic fundamentalists. Darfur sheds the same tears as Mazari Sharif. This is the strong sense of loss that binds these people together.

But then who will speak of the pain? Can metaphors and tales express the personal loss? Can words cure? Are certain losses unspeakable? Can poets do justice to the feelings? Is Mahmoud Dervesh still relevant? Again, it was Adorno who recanted. He wrote in the nineteen sixties. "Perennial suffering has as much right to express itself as the martyr has to scream; this is why it may have been wrong to say that poetry could not be written after Auschwitz" [Negative Dialectics, Part III. Models. Meditations on Metaphysics, After Auschwitz 354-358]