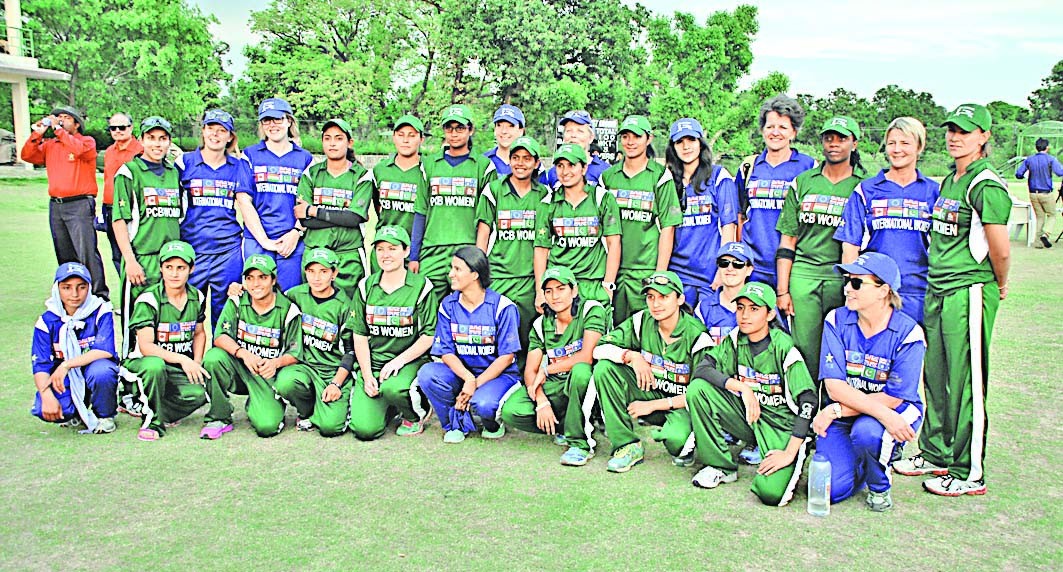 "The practice of physical education and sport is a fundamental right for all", says UNESCO International Charter of Physical Education and Sport. Recently the women’s wing of PCB and a group of enthusiastic ladies from the diplomatic community in Islamabad got together for a charity match, at the scenic venue of Saidpur Village Cricket Ground.

Roots Millennium School helped in management, while Malik Sport and Grays of Cambridge arranged for the cricket gear.

The Australian High Commission organised a training camp and around 20 ladies from the diplomatic community practised for the event.

As part of the PCB’s and diplomatic community’s initiative to encourage cricket at girls schools, especially the underprivileged ones, four schools were invited to participate in the event: Special Education School Islamabad for Children with Hearing Impairment, SOS Villages Islamabad, Mashall Charity School, and Bari Imam and Government Elementary Girls High School Kalyal.

Team Blue, led by Mrs Susan Heyworth, scored 104 for 3 wickets, in the allotted 15 overs. In reply, Team Green managed only 75 runs. Pakistani cricketer Javeria Khan scored 49 runs for Team Blue and won the player of the match award. The crowd included members from the diplomatic community and cricket loving families of Islamabad.

A special feature of the match was the participation of Reema Bibi, from Special Education School for Children with Hearing Impairment, and Sakina Bibi, from Mashall Charity School.

For these two young girls, there could not have been a better day, as they played alongside the Pakistan women team, applauded by a most motivated crowd and integrating with players from different cultures and countries.

I would like the readers to know a bit more about these two girls’ efforts to follow sport activities in spite of extremely difficult circumstances.

Sakina belongs to Dir and is studying at Mashall Charity School. Her father moved to Bari Imam, hoping for a better life, but unfortunately here too they continue to live below the poverty line.

Despite the cultural restrictions and limited playing opportunities for girls, Sakina chose to follow cricket.

The charity school has limited resources for sport activities, but full marks to the enterprising principal, who arranges tennis ball cricket for girls. She provided a platform for Sakina to nurture her talents.

With sheer perseverance, Sakina has developed into a capable all-rounder and proved her worth at the charity match by winning the best bowler’s prize.

Sakina, now 13, has a dream to play for Pakistan. Her school’s principal is in touch with her father and is quite hopeful that he will allow Sakina to continue.

Reema too comes from a very poor background. Her father, a labourer, has a limited income. In spite of such testing circumstances and having hearing impairment, this brave girl developed interest in cricket.

Rukhsana Amin, a social aid worker, convinced Reema’s father of the benefits of her participation in sport and physical activity programmes.

Reema continued to progress and was named captain of the girls’ team. Within the school, she is often seen playing alongside her male class fellows and proves to be a tough competitor.

The confidence gained at school sport activities was evident as Reema walked into the cricket field and communicated with the Pakistan women’s’ team and ladies from the diplomatic community with great self-assuredness.

Like Sakina, Reema too wants to make a name in cricket. A positive outcome of her interest in cricket is an improvement in her studies.

All the four schools invited at the event were delighted to be gifted complete cricket gear.

In Pakistan, due to cultural reservations, female sportspersons have limited exposure. The government needs to promote female participation in sport and physical activities.

Empowerment of women through participation in sports and physical activity is at the heart of UNDP’s 2014-2017 Gender Equality Strategy.

To facilitate female physical activity programmes in Muslim countries, companies are now designing sport attire that enables girls to play without having to break their religious laws.