The glorious path of Palestinian rebellion

In an era that had declared the death of all projects of social justice, Palestinians have consistently refused to allow anyone to write an obituary for Palestine 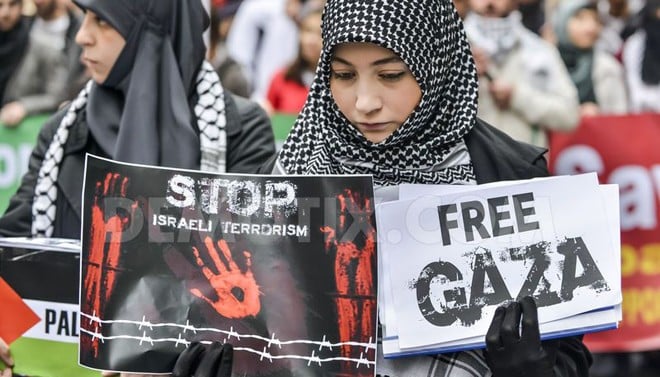 Nothing has quite captured the essence of the Israeli attack on Gaza in its purest and most brutal dimension than pictures from the ‘Sderot cinema’ uploaded by Allan Sørensen, the Middle East correspondent for Denmark-based newspaper, Kristeligt Dagblad. Israeli citizens are shown camping on a hilltop, consuming beer and popcorn (hence the analogy with cinema) as they watch and cheer the aerial bombardment of Gaza by the Israeli Defence Forces.

While the Israeli population’s fear of the Arab enemy turns into a perverse enjoyment of war as spectacle, the capacity of Gazans to flee the bombardment has been erased with the closing of borders by Israel and Egypt, condemning them to endure a third round of indiscriminate bombardment by the Israeli state since 2008.

Yet, within the tragic story of this conflict resides universal lessons for humanity, which perhaps explain the increasingly global resonance of the movement for justice in Palestine. One can sum up these lessons as the courage to rebel and to endure the consequences of that rebellion. Though this is a rather simple phrase, it carries incredible consequences for our disoriented world, as I will discuss later.

It is dishonest at best to declare this conflict as a "war," since the word assumes a certain level of symmetry between the parties. In this case, however, on one side we have the region’s mightiest military power, armed by the great powers of the West and backed by the world’s hegemonic media houses, which is ready to display its capacity and willingness to place the entire population of Gaza under collective punishment.

On the other hand, we have a "country" with no military and no functioning government that is facing declared and undeclared sanctions from Western and neighbouring Arab countries, with rocket attacks (that have managed to kill one Israeli) as their only weaponry. That the US and its allies in Europe and the Middle East are not least disturbed by this televised massacre goes on to suggest how sacred words like "human rights" and "democracy" can be held in abeyance to give way to the cynical geo-strategic calculations to maintain power and privilege.

Perhaps Palestine reminds us all of the power which has been stolen from us, the power of dreaming, and perhaps the display of solidarity with Palestine is part of our desire to reclaim our stolen asset, to dream again, to live again…

It is at this point that one can discern the universal meaning of Palestinian resistance for our time. Since at least the 1980s, governments, media houses, and intellectuals have insisted on the futility of conceiving of alternatives to the world as it exists, culminating in Thatcher’s famous slogan "There is no alternative", whose philosophical equivalent was Fukuyama’s "End of History" thesis.

This consensus elevated cynicism as the ideology par excellence of our times, with even leftist firebrands, including in our own country, accepting the hegemonic frameworks constructed by the powerful under the dubious category of "realism". This kneeling in front of reality happened precisely at a moment when reality itself became increasingly impoverished for the vast majority of people.

Within the unfolding drama in Gaza, we are then witnessing a key ideological battle of our era. It is not the first time in history that one side has propagated the end of history, the end of dreaming, in an attempt to confine our bodies and our thoughts to the prison of a reality carved by the oppressors. The eternal choice when faced with such grotesque forms of injustice is between resignation and rebellion.

The Palestinians, as a people, chose the difficult but glorious path of rebellion, pitting them as lone warriors against all the mightiest powers of our era. If history had placed the burden of re-awakening our lost humanity in these disoriented times on Palestinians, they have time and again proven themselves to be worthy of this task.

In 1987, a time when politics was being relegated to the dustbins of history for an entire generation, the Palestinian youth led an unprecedented uprising against the Israeli occupation, known as the "First Íntifada". The world watched hundreds of Palestinian youths, armed with sticks and stones, standing tall in front of Israeli tanks and bulldozers, putting to shame the claims of Western and Arab leaders who preached the impracticality of resisting Israel.

Despite more than a thousand Palestinian deaths, the Intifada continued until 1991, only to return even more forcefully in 2000, displaying a breath-taking steadfastness known only in legends. In an era that had declared the death of all projects of social justice, Palestinians have consistently refused to allow anyone to write an obituary for Palestine.

This politics of courage has to be differentiated from heroic acts of resistance. While the latter implies momentary bursts of bravado, the former requires one to hold onto a point of justice over a prolonged period of time, regardless of the changing popularity of this principle. Endurance is the key to courage, and one cannot find a more persevering people than the Palestinians who, dispossessed from their homeland in 1948, vilified in the global media, and abandoned by their Arab neighbours, have kept their nation intact in their thoughts, their poetry, and in more organised forms of refusal to submit to the Israeli occupation.

It is perhaps for this reason that Palestinians strike a chord with the dis-enfranchised youth around the globe, with thousands of people marching in solidarity with Palestine in disparate cities, such as New York, London, Paris, Sydney, Johannesburg, etc. Perhaps Palestine reminds us all of the power which has been stolen from us, the power of dreaming, and perhaps the display of solidarity with Palestine is part of our desire to reclaim our stolen asset, to dream again, to live again, since only the living have the unique capacity to dream. The Palestinian poet, Rafeef Ziadah, put it aptly when she wrote: "We Palestinians teach life, sir, after they have occupied the last skies!"

Yet, it will be all too easy if we simply assume that our sympathy with Palestine by default places us on the side of justice. If Palestine stands for something universal, then it must force us interrogate the positions that we ourselves occupy, whichever part of the world we inhabit. If we oppose the Apartheid walls being built by Israel to segregate Palestinians and Israelis, then we cannot remain neutral to visible and invisible walls that segregate almost all modern cities in the world, including those in Pakistan.

If we have the ability to discern the truth amidst the propaganda of the global media and Israeli jingoism, surely we can utilise the same lens to see through the lies of our own state, particularly when it deems a vast number of its own citizens expendable for protecting national honour.

How are we to distinguish between the mutilated bodies of Bengalis, Baloch, or the Palestinians, without resorting to a method of differentiation similar to the one currently utilised by the Israeli state? How is our collective enthusiasm for a military operation in Waziristan, a place about which a vast majority of urban Pakistanis know absolutely nothing, very different from the Israelis cheerfully watching bombardment on Gaza? Are we not also guilty of turning an act of collective punishment into a spectacle, justified in the perverted language of security and jingoistic nationalism?

Of course, no two situations are ever neatly identical, but one can surely abstract principles from a particular situation to interrogate another situation. It is too comfortable a position to simply suggest that the Israeli state contains within itself all the evils of our era. Comfort is one luxury the Palestinian struggle does not afford to anyone, not even to its sympathisers. Thus, to remain in solidarity with the Palestinian cause is to become vigilant about the injustices that pervade our society and to be conscious of our own participation in forms of oppression, no matter how far it takes us from the established consensus.

Despite numerous victories in the UN and a growing Palestine solidarity movement, a Palestinian state still remains an elusive dream. However, pitted against such formidable odds, no one thought the Palestinian struggle would be an easy one. Even without achieving statehood, the Palestinian people are teaching the world a very different meaning of life, as one geared towards realising a more just future rather than surviving a bleak present. If Palestinians have proven themselves worthy of carrying the burden of history, today we must all prove ourselves worthy of becoming Palestinians.

The glorious path of Palestinian rebellion