The bane of Bannu 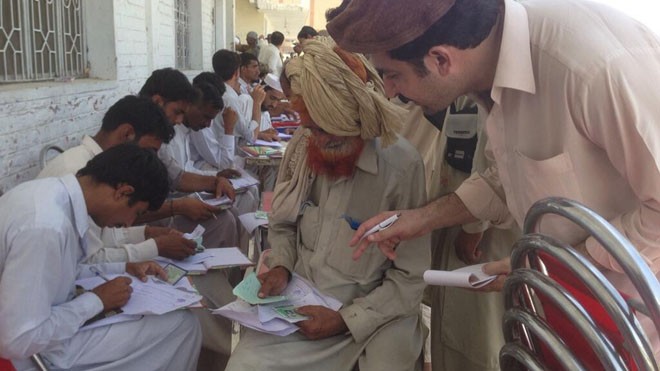 For generations, the people of Bannu have suffered at the hands of kidnappers and criminals operating from the neighbouring North Waziristan Agency and the semi-tribal frontier region Bannu.

Though Bannu is an ancient place, a military base was established close to the town by Herbert Edwardes during the British rule in 1848 and it soon became the target of freedom-loving tribesmen, descending from North Waziristan and harassing the rulers and their local loyalists.

This time though, Bannu is playing host to the hapless tribesmen displaced from their homes in North Waziristan as a result of the military operation Zarb-e-Azb launched against the militants on June 15.

Bannu’s limited civic services were largely unable to cater to the needs of its estimated 700,000 population, but it is now required to cope with the influx of almost 500,000 internally displaced persons as well as their more than 100,000 cattle.

Located 145 kilometres from Peshawar, Bannu is the first point of call for the IDPs. Most end up staying in the city or the surrounding villages. Others move on to Dera Ismail Khan, Tank, and Lakki Marwat on the one side or to Karak, Hangu, and Kohat on the other.

Many IDP families have gone to Peshawar, Charsadda, and Nowshera and the well-to-do to the cooler climes of Abbottabad and Mansehra in Hazara division.

Many Waziristani families want to go to Karachi, where their relatives and friends have been living for years and doing business, ranging from trucking to timber, or to parts of Punjab, but they are unsure if they would be welcome after the initial statements by those in power in Sindh and Punjab that they cannot take IDPs, particularly from a notorious place like the militancy-hit North Waziristan tribal region.

Host towns and communities in Khyber Pakhtunkhwa have suffered a lot due to the influx of displaced people over the past decade.

Suddenly in Bannu, houses are in short supply, rents have sky-rocketed, property prices have gone up, and the bazaars have become congested. There were never so many vehicles, including some non-customs paid and without any registration number, on the road in Bannu.

Complete strangers have become neighbours. People have started suspecting newcomers and an uncertainty prevails in the air. Nobody knows for how long the IDPs would stay in Bannu. For sure, many of them would become permanent residents of Bannu.

People of Bannu lovingly call their city Banigul, adding the word "gul" (flower) to its name to show admiration for its sights and sound. Bannu is known for its woollen products: spices, figs, sohan halwa, and naswar (snuff).

The Bannuchi tribe outnumbers others in Bannu, though increasingly members of other Pashtun tribes, such as Wazir, Mehsud, Dawar, and Marwat have made it their home.

Situated in the Kurram river valley, Bannu has served as the military base both in the past and the present for carrying out operations in North Waziristan and the adjacent tribal areas. Presently, Pakistan’s security forces used it as a rear base while mounting the massive military operation in North Waziristan.

The people of Bannu benefited from the Muttahida Majlise-e-Amal rule from 2002-2008 when one of their own, Akram Durrani, served as chief minister and allocated huge funds to build a university, medical college, Khalifa Gul Nawaz Hospital, parks, roads, and schools.

The Bannuchis were proud that they have finally produced a chief minister. Late President Ghulam Ishaq Khan also hailed from Bannu as he was from the Ismailkhel village located near the city and belonged to the Bangash tribe. However, he is a forgotten man in Bannu because the people weren’t happy with him when he held important positions in the government but failed to get any development project sanctioned for his native town.

Host towns and communities in Khyber Pakhtunkhwa have suffered a lot due to the influx of displaced people over the past decade. Almost all cities and towns have seen such an influx but some like Peshawar, Mardan, Charsadda, Nowshera, Lower Dir, Kohat, Dera Ismail Khan, Tank, and now Bannu have been burdened more as the tribal areas to these places have been the scene of growing militancy followed by military operations.

The Refugees Affected and Hosting Areas (Raha) is a joint project of the Pakistan government and the UN organisations to rehabilitate the places affected by influx of refugees and IDPs. Bannu would need a major initiative of this kind to rehabilitate its damaged infrastructure once most of the IDPs are gone.

The bane of Bannu