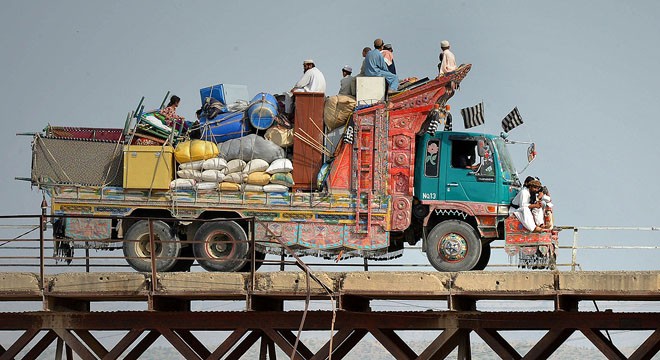 It is a familiar story and has been repeated at every place that has suffered natural or man-made disaster in Pakistan in recent years.

Be it the earthquake of October 2005 when Hazara division in Khyber Pakhtunkhwa and Azad Kashmir were devastated, the humanitarian crisis caused by the displacement of around 2.3 million people as a result of the military operation in Swat and other districts of Malakand division in 2009, or the summer floods in most of Pakistan in 2010, the Islamic non-governmental organisations have often been the first ones to reach the site of destruction and also the most visible.

This time also, two Islamic NGOs reached Bannu ahead of others to provide assistance to the tribal people dislocated by the military operation in North Waziristan.

Al-Khidmat Foundation, affiliated to the Jamaat-e-Islami, and the Falah-e-Insaniyat Foundation (FIF), linked to Hafiz Mohammad Saeed-led Jamaatud Dawa were the first NGOs to arrive on the scene and provide a range of services to the internally displaced persons (IDPs).

Though a few others, including Pakistan Red Crescent Society, followed and started relief work, the Al-Khidmat and FIF were the most active and visible with their ambulances, medical camps and food distribution centres.

It seems the other NGOs are taking their time to organise relief and social work. Some have security concerns, others lack manpower and resources and most are more into advocacy work. Senior officials in the Khyber Pakhtunkhwa government told TNS that they have received requests from a number of social workers, philanthropists and NGOs for undertaking welfare activities for the IDPs in Bannu and other cities and towns, but were reluctant to grant permission until issues of security were addressed.

It seems the other NGOs are taking their time to organise relief and social work. Some have security concerns, others lack manpower and most are more into advocacy work.

Apparently, the Islamic NGOs have no such concerns and this is the reason their workers are the first ones to arrive at the scene after every natural or man-made disaster.

Atiqur Rahman Chohan, the FIF’s coordinator for relief work in Khyber Pakhtunkhwa, told TNS that they were on the spot in Bannu on June 16 a day after the military operation was launched in neighbouring North Waziristan. "We have a network of FIF in almost every district of Pakistan. We already had a strong presence in Bannu, Dera Ismail Khan, Tank and Lakki Marwat districts and I was able to mobilise my staff and volunteers in no time. We have stocks of food and non-food supplies and it didn’t take us long to transport the needed items to Bannu," he explained.

The figures provided by Chohan about the FIF’s relief work were impressive. He said 145,000 displaced persons had been provided cooked food to-date, 15,000 received medical care, four static and two medical units are operational with trained doctors, paramedics and operation theatres, and eight ambulances are available round-the-clock for patients. He said 10,000 IDPs were provided food at Sehar and Iftar and 125 maunds of dates and packets of dry food items have been distributed.

The FIF also managed to open a distribution centre in Dera Ismail Khan and is ready to expand its relief work on need basis. "We started giving tarpaulins to the IDPs when they refused to stay in the small suffocating tents set up by the government in Bakkakhel so that they could use it for shade and also get some ventilation," Chohan added.

When asked whether they were stopped by the government or security forces from doing relief work, the FIF official said nobody created hindrance in their activities. "The people in Dera Ismail Khan staged a rally in our support when the US recently imposed sanctions on Jamaat-ud-Dawa and some of its members. Our work is appreciated and it is due to the trust in FIF that traders and common people give us donations in cash and kind," he argued.

As for Al-Khidmat Foundation, it isn’t controversial as its patron, Jamaat-e-Islami, is working legally and peacefully. The FIF’s links with Jamaat-ud-Dawa, which in turn has been linked to Lashkar-i-Taiba, makes its work controversial. The Al-Khidmat Foundation, headed by Dr Hafeez-ur-Rahman, claims to be the biggest welfare and charity organization in Pakistan as it is running schools, hospitals and many other projects. Its work has been recognized internationally and the government of Japan too gave it a generous donation for relief work during the 2010 floods.

Other political parties, too, have established their social welfare and charity organizations, but the MQM’s Khidmat-e-Khalq Foundation, ANP’s Bacha Khan Trust and the PPP’s Shaheed Bhutto Foundation have yet to mobilise volunteers and do relief work in support of the North Waziristan IDPs. They have left the field wide open for the Islamic NGOs, which have thrived in recent years and expanded their network having hundreds of volunteers and huge amounts of funds.