In the heat of devotion 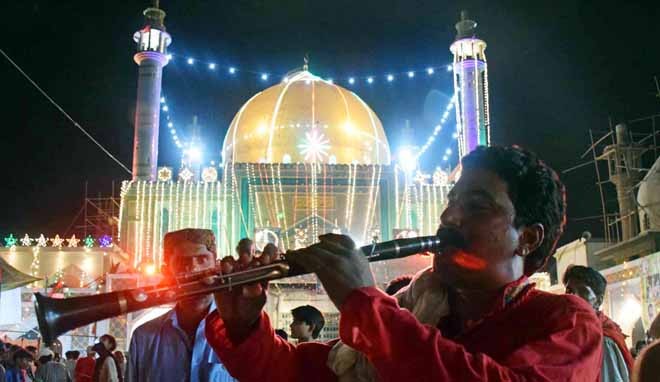 Death of over 58 people during the three-day celebrations of 762nd Urs of Sufi saint Qalandar Lal Shahbaz in the middle of June, could have overshadowed the military operation in North Waziristan and police action against the workers of Pakistan Awami Party (PAT) in Lahore. Unfortunately, this huge human loss remained under-reported in the mainstream media.

Of the 58 people that died during the three day Urs, held from June 17-19 this year, bodies of over a dozen people were declared unclaimed and buried in Sehwan town in unmarked graves. No one has come to claim these bodies yet.

The indifference over these deaths shows that human life has lost its value. Had this happened elsewhere in the world, it would have resulted in public outrage resulting in immediate resignation of public officials and an inquiry to cull out facts. Instead, the government officials found it easy to put the blame on extreme weather.

The annual Urs of Qalandar Shahbaz in Sehwan Sharif is the largest congregation besides the Urs of Shah Latif Bhittai, where hundreds of thousands of devotees throng to pay tribute to these Sufi saints of Sindh -- a symbol of peace, harmony and humanity. A number of devotees from other provinces, especially from Punjab, also attend the three day celebrations.

Due to insufficient arrangements on the part of the government and a greed for profit in the private sector, the devotees face a lot of problems ranging from paying exorbitant prices for basic things to loss of lives.

Though there have been smaller incidences of death or injury of devotees during Urs in the past, the figure of 58 deaths this year was the highest ever reported at any shrine in the country in recent history. The Sindh government simply blamed the weather as the sole cause of deaths, but local activists have their own view on the issue.

"Weather was harsh but I don’t think that it was the only reason," says Mustafa Mirani, a local social activist. "The government failed to make necessary arrangements for devotees which resulted in more deaths," he added.

In his view, non-availability of drinking water and sheds were two crucial facilties that were neglected considering that many of the devotees travelled hundreds of kilometres to reach Sehwan. "They were exhausted and on arriving at Sehwan they were faced with the sizzling sun with no shed or shelter."

No official figure about the participants of the event are available; however estimates suggest it runs in hundreds of thousands. The number has increased in recent years attributed to better communication and transportation.

There is hardly any vegetation or plantation around the area of shrine, which becomes the centre of activities during the Urs. Makeshift hotels and shops are erected temporarily, which can help a little in this soaring heat.

Mirani was himself present in Sehwan during the Urs days and says he saw unconscious people falling under the open sky but there was no shed or shelter around. The makeshift camps established by the government departments could only shelter their own staff.

Obviously, when temperature soared to 50 degrees Celsius in the hilly area around Sehwan, everybody helped themselves with little care for others. Healthcare facilities were inadequate. Adding to injury was heavy loadshedding, so the enjoyment of the Urs celebrations was not even a possibility.

Sehwan’s Taluka hospital was short of facilities to cater to the needs of such a large number of devotees. The emergency arrangements and the healthcare staff’s inadequate capacity were exposed hours after the first few bodies were shifted to the hospital. At one point the smell coming out from the bodies restricted other patients’ entry into the hospital. Mortuary’s cold storage system was not working either.

Sindh government’s Auqaf Department, which collects all donations and is also caretaker of all the shrines in Sindh, claims that the arrangement outside of the Dargah (shrine) was not their responsibility.

The Auqaf official was not even willing to confirm the number of deaths saying, "We just read in newspapers and we are not aware how many people died and why."

In the absence of local government system, the district administration comprises Sehwan Municipal Committee and office of the district Deputy Commissioner based at Jamshoro a good 130 kilometres away.

Performance of municipal committees in Sindh in general is an open secret now and, in this particular case, it was the worst. "It’s a clear case of inadequate arrangements, and the municipal committee failed to deliver," says Mirani.

Interestingly, official meetings are said to have been held at the Commissioner’s Office and at the office of the relevant secretary ahead of the Urs. A Mela Committee was formed to oversee the arrangements but the main focus of such efforts was about arrangements for VVIPs, not for common public, and this was obvious from the human tragedy during the recently held Urs.

Political figures including the PPP co-chairperson Asif Ali Zardari have always expressed great respect for the Sufi saints especially Qalandar Lal Shabaz and has often visited the shrine to seek blessings. The provincial government has also sanctioned a hefty amount for a project for the restoration and renovation of the shrine. However, the loss of human lives during the Urs clearly demonstrates the lack of seriousness at official level in all aspects.

The Sindh Chief Minister who visited the shrine on the third and final day of the Urs downplayed the figure of dead, saying that the weather had been responsible for such massive human loss.

In the heat of devotion