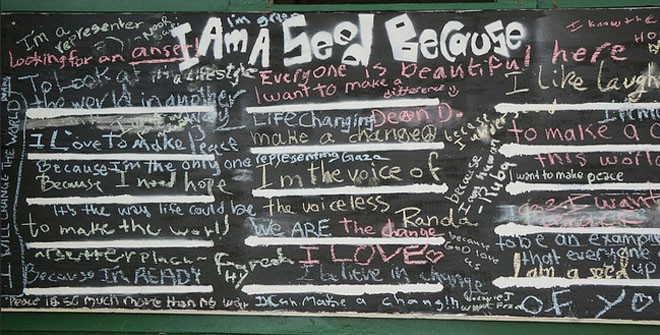 With an unwavering gaze, I watched the mighty golden medallion melt into the horizon, leaving behind streaks of changing hues, as if attempting to replace what had been lost. Despite the regular occurrence of the natural phenomenon, each sunset possessed a captivating charm. To me, this attraction rested on the fact that one could never discern one hue from the rest, or really put a finger on when exactly the sky replaced its burnt orange blanket with one of a dusty mauve shade. Peering out of my oval shaped cabin window during my 15-hour flight from the States to Lahore, I realised how I was always oblivious of the journey, giving significance only to the commencement and its completion. Lack of observational skills, I presume.

Soon after our arrival in our homeland after three long weeks, our first and proper initiation into Seeds of Peace Pakistan happened where our group of ten dazed and sunburnt children were greeted with hordes of questions -- mostly left unanswered.

Unfamiliar voices enveloped me, all inquisitive of my perception of our shared experience at Maine. "Don’t you think you’ve changed? How did the Camp impact you? Don’t you miss it already? I spent a month in denial of reality with my ‘post-camp sickness’when I returned. What was your best and worst moment? It really is a life changing experience, don’t you agree?"

I gave an exasperated and uneasy smile, unsure of the transfiguring experience the older ‘Seeds’ spoke of. Sure, it was an opportunity that came once in a blue moon leaving me overwhelmed with nostalgia, but had I transitioned? Except for sporting a disastrous new orange tan, I felt like the same person I was a month ago. Seeds of Peace had an aim to change a group of children who, as a result, held the power to change the world. After feeling like I had not changed as a person, I contemplated the idealism of this purpose.

It has been exactly a year since I have returned from the Camp, with a rejuvenated faith in its aim. While I may not have shifted landscapes in the world, I do believe I can play a part.

Turning a blind eye to details, I failed to see any transition within me that others so aptly noticed. Perhaps the first sign of change was my newly quiet disposition. Coming from a self-built utopia, it was perhaps disillusionment with the world around me; the petty matters and the unnerving ignorance. They could not see beyond labels and stereotypes; they would see inhabitants of the enemy countries rather than humans. After all, it was ingrained in our mentality that everything negative in our country was a result of either a ‘yahoodi saazish’ (Jewish conspiracy) or Indian/American tyranny.

My growing interest in the state of affairs, not in ‘nations around us’ but in the ‘homelands of my friends’, would be the second sign. These weren’t facts or figures anymore; these were the lives of my companions.  A humanistic factor was connected to each story, for even as I sided with one particular perspective, I could not help but consider the other view. At times, I may have even questioned the side we were taught to support. ‘God forbid’ we may admit the fault lies in us at times! The media painted the truth in several colours before presenting it to us, so I attempted to see in a colourblind manner.

It seems an arduous task to teach a community of blind men to stray from all that is known to them, and to see. However, being a blind man yourself, who learnt to grasp the blessing of vision, you can’t help but see it as possible. Hence, it is your duty to try. Informal arguments with the community around me was a common occurrence, I wanted them to know all that I learnt in the course of three weeks. With named references and stories of people with shared emotions, even the hardest of hearts softened. Unknowingly, I finally did alter the rigid perceptions of some around me.

It has been exactly a year since I have returned from the Camp, with a rejuvenated faith in its aim. While I may not have shifted landscapes in the world, I do believe I can play a part. Seeds of Peace did impact me in ways unnoticeable to me, till it mirrored in the people I unexpectedly influenced. Having said that, I hardly think I have completely metamorphosed into my end result and final being. Simply that my observational skills have gotten sharper in the course of my journey.