From Waziristan to Syria to Iraq 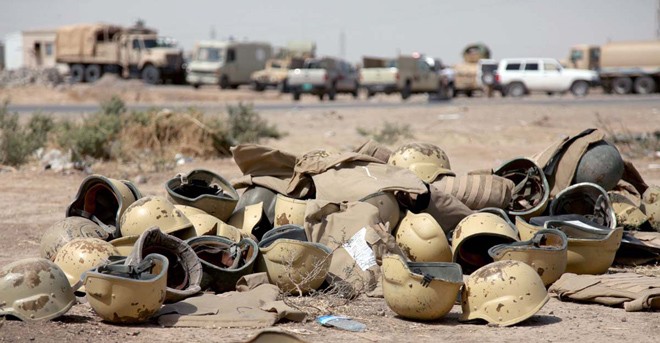 The militants belonging to the al-Qaeda-linked Islamic State of Iraq and Syria (ISIS) are marching towards Baghdad after seizing control of two major cities of Mosul and Tikrit amid media reports that the Sunni fighters who want to overthrow the Shia-dominated Maliki government are being aided by hundreds of their ‘jehadi brethren’ from several Muslim countries including Pakistan which has come to be known as the hotbed of holy warriors.

The holy warriors of the ISIS are rapidly advancing in the looming security vacuum left by the collapse of the Iraqi security forces and the refusal of the West to recommit forces to stabilise Iraq. The ISIS is in the same position today that existed before the US surge back in 2007 when 130,000 American troops, backed by hundreds of thousands of Iraqi security forces, had to face a tough battle to clear Baghdad and four other key provinces. The American and Iraqi forces, which were being backed by the US Air Force and the Army aviation brigades to target the command and control centre and training camps of the then Islamic State of Iraq (ISI), took more than a year to claim victory.

However, as things stand, there are no US forces on the ground to support the Maliki government, the American air power is missing and the Iraqi military has already been mortified while surrendering or retreating during the ISIS crusade from Mosul to the outskirts of Baghdad.

The al-Qaeda-linked ISIS fighters are being aided by hundreds of holy warriors from different countries like Pakistan, Uzbekistan, Tajikistan, Chechnya, Egypt, Turkey, etc. That the Pakistani holy warriors had been fighting foreign wars in Afghanistan, Jammu & Kashmir, Chechnya and Bosnia is widely known. But their involvement in external jehad was substantially curtailed after 9/11, with the military establishment under Musharraf reversing its policy of using militancy as a foreign policy instrument.

The Musharraf regime’s U-turn on the Kashmir jehad deeply offended Pakistan’s jehadi mafia which subsequently decided waging internal jehad by declaring a full-fledged war on the state of Pakistan that is still on.

The network sending the Pakistani Sunni fighters to Syria is said to be run by the TTP and the LeJ jointly, both of which are affiliated with al-Qaeda because of their common anti-Shia and anti-American agenda.

As Pakistan’s resurgent jehadi factory keeps producing and supplying well-trained and highly motivated fighters, several al-Qaeda-linked jehadi/sectarian groups especially the Tehrik-e-Taliban Pakistan (TTP) and Lashkar-e-Jhangvi (LeJ) have lately been found involved in exporting holy warriors to wage jehad on new external fronts, especially in Syria and Iraq. Media reports of the Pakistani mercenaries joining hands with the rebels of Islamic State of Iraq and Syria to fight against the Bashar al-Assad regime had first appeared last year as Syria became the new centre for global jehad.

It was an anti-Shia ideology that drove TTP to join the Syrian conflict.

In a January 2013 video, TTP ameer Hakimullah Mehsud, discussing the organisation’s post 2014 objectives, had described TTP as an international organisation. Asked about the uprisings in Arab Spring countries, Hakimullah said, "We support them and we will aid them. If they need our blood, our life; if they need our people, we are ready for every type of assistance so that the democratic and secular system [in Arab nations] comes to an end."

Reiterating that the Taliban have a global jehadi agenda, a close aide of Hakimullah said that the TTP fighters had been sent to Syria upon the request of al-Qaeda’s operational commander in Syria, Abu Omar Baghdadi who wanted Pakistani Taliban to be part of a global jehad.

More than two years since the beginning of the uprising against Syrian President Bashar al-Assad, thousands of holy warriors from various Muslim countries including Pakistan have reportedly travelled to Syria to fight with al-Qaeda-linked ISIS. And going by some latest media reports, hundreds more holy warriors belonging to the TTP and LeJ have reached Iraq to join hands with the forces of the Islamic State of Syria and Iraq.

An Iraq-based jehadi organisation -- the Ansarul Islam -- has already released a video showing training activity in a jehadi camp dedicated to the memory of Maulana Abdul Rasheed Ghazi, one of the two cleric brothers who took centre-stage during Lal Masjid standoff in July 2007. Ghazi was killed in a military operation on the mosque and now lives in the jehadi hall of fame.

The video starts with a slickly-edited training montage showing fighters of the Ansarul Islam busy in various exercises and posing for the camera, their faces covered by pieces of cloth. Then the video segues into a tribute to Ghazi. In the beginning, a message from Ghazi is read out, addressed to the "men of the Ummah". The video then shows visuals of Lal Masjid itself, along with Jamia Hafsa and troop deployment prior to the military operation. The voice-over, which showers praise on Lal Masjid militants, also condemns the government of Pakistan and the army for conducting the operation.

An Iraq-based jehadi organisation -- the Ansarul Islam -- has already released a video showing training activity in a jehadi camp dedicated to the memory of Maulana Abdul Rasheed Ghazi.

The Lal Masjid’s link with global jehad is established when Osama bin Laden is quoted in the video praising Maulana Rasheed Ghazi as a hero. Thus, Ghazi keeps inspiring the followers of his cause not only in Pakistan, but also in Iraq where the holy warriors of the Ansarul Islam have not only named a jehadi training camp after Rasheed Ghazi but also subdivision of their group.

According to the TTP circles, the Taliban are prepared to help their Sunni Muslim brethren worldwide by providing manpower to ease their hardships, be it Syria or Iraq. The network sending the Pakistani Sunni fighters to Syria is said to be run by the TTP and the LeJ, both of which are affiliated with al-Qaeda because of their common anti-Shia and anti-American agenda. The leaders of this network are Usman Ghani, a former commander of the LeJ from Punjab, and Alim Ullah, a TTP commander from Khyber Pakhtunkhwa Province.

In fact, the TTP and al-Qaeda have a symbiotic relationship and the Taliban believe that sending fighters to countries like Syria and Iraq will be seen as an act of loyalty toward al-Qaeda. Compared with the Afghan Taliban who are least concerned about jehad in other countries, the Pakistani Taliban’s overall agenda has leaned more towards the concept of a global jehad.

The most dangerous phase from Pakistan’s point of view will be when these holy warriors finally return to their homeland to further strengthen the al-Qaeda-linked TTP. There are suspicions that their renewed activities would instantly widen the Shia-Sunni conflict here which may also lead to an escalation in the ongoing proxy war in Pakistan.

From Waziristan to Syria to Iraq