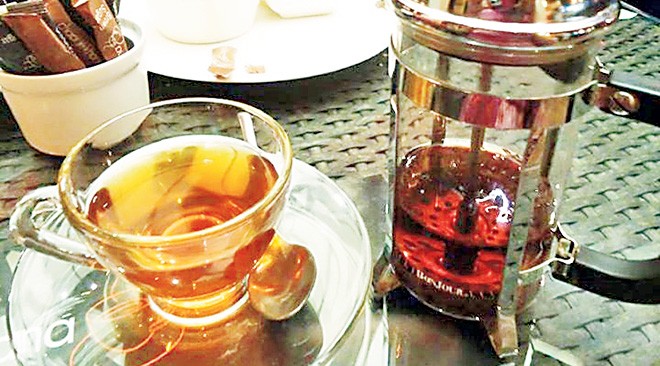 For a tea drinking nation, we have an awful lot of coffee shops in our major cities and Islamabad leads this fad from the front. From Kohsar Market to F-11 Markaz, coffee shops are sprawled across the city. But what are options for the doodh patti and kadak chai loving lot, for whom coffee can never provide the kind of satisfaction that tea does? Isn’t it ironic that coffee reigns as the hottest high-end joint beverage in a region where tea has been loved for centuries? The good news is that Chaaye Khana, Islamabad’s first modern tea joint, has broken that spell.

Chaaye Khana opened in early 2011 and is spearheaded by businessmen duo Kashif Ahmed and Israel Wassay. Speaking to Instep, Kashif said, "A tea-themed high end cafe was missing in Pakistan and that gap in the market motivated us to build something that would draw in families, professionals, intellectuals, students etc."

Chaaye Khana, in all its sophistication and subtlety, is the perfect antidote to the loud and rowdy coffee culture of the capital. Gone are the days when you could just sip a cuppa while reading a book or chatting with your friends at a coffee shop without being disturbed by loud music and louder teenagers in the background. Not all of us enjoy the vibrations of the bass dropping under our feet when we want to unwind.

Coffee shops of Islamabad paint the same picture: overpriced coffee, jarring music and young brats with too much time and money on their hands. If you’re looking and hoping for the depth and maturity of a dark roasted, aromatic coffee, then you’ll be disappointed with the light, frothy and noisy ambience that you’ll step into. Unfortunately, coffee shops have turned into teenage hang-outs. Half-baked club culture, maybe?

On the contrary, Chaaye Khana is not only cozy; it’s sophisticated, subtle and somber. It also claims to serve over 70 different blends of tea. From green tea to quintessential Punjabi doodh-patti and herbal tea to pink Kashmiri tea – Chaaye Khana has it all. Local dhaabas and posh hotels are the only places that are catering to avid tea drinkers. This restaurant balances the two extremes to perfect blend; it offers the coziness and rich dhaaba-brewed taste and the high-end setting.

This multitude of tea options comes with a scrumptious menu, starting from a popular breakfast and brunch tab. The aroma of scrambled eggs, fresh croissants and pancakes fills the air if you visit the place in the morning. The array of snacks includes croissants, brownies, pies, and my personal favourite, potato samosas – heavenly with some tea! The side menu ranges from a selection of sandwiches to snacks and desserts. Everything is reasonably priced and compliments the tea very well. Don’t be fooled by the name – it is not just for tea aficionados! The dessert and beverage menu is attractive enough to lure in even the non-tea drinkers.

To top it all off, Chaaye Khana’s ambiance sets it apart from all other places. A sizeable portion of Islamabadis crave a place to hang out after work or on the weekend – a place where the setting is sublime and relaxing and the crowd, mature. Sheesha cafes are out of the question for being a tad too (dare we say!) pedestrian. Interrupting teenagers on dates after school isn’t necessarily a fun thing to do, and this is where Chaaye Khana does us fair- it is self-assured, it has an identity of its own, and it only attracts a certain kind of crowd.

In fact, that’s one aspect that makes this place stand out in Islamabad; it attracts a decent and mature crowd. It’s a perfect spot for your Readers’ Club meetings! The teashop also happens to be popular with politicians and TV personalities; one has often spotted MNAs and anchorpersons deep in conversation and scheming away over a cup of hot chai.

So what does the future hold for Chaaye Khana? Kashif Ahmed informs: "We are currently in talks with other parties for franchises in other cities as well. Our goal is to become a national brand with presence in all major cities. Going international is also on the cards". He added that a franchise may very well be on its way to Bahria Town!