Anti-tobacco laws up in smoke 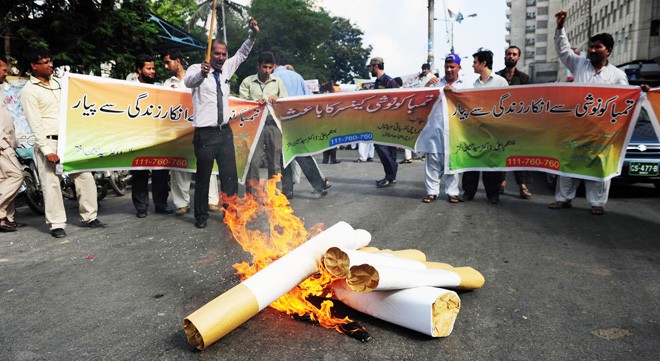 Think of an unhealthy habit that many of us make a conscious effort to avoid and yet it not only affects us but also carries away, like an epidemic, thousands of precious lives every year. It is none other than passive smoking which, according to WHO estimates, snuffs lives out of 600,000 unsuspecting victims every year. Consumption of tobacco has now emerged as a risk factor for six out of eight leading causes of deaths with 6 million people perishing every year due to use of tobacco in the world.

The situation is hardly any better in Pakistan where a staggering 22-25 million population have come to puff away on tobacco or tobacco products. In fact, a Pakistan Health Education survey counts at least one smoker in 55 per cent of households. The growing spread of tobacco is putting a vast swathe of population at serious health risks. Of them, around 100,000 are those who fall victim to this deadly disease every year.

Pakistan is part of the global efforts to limit and control the use of tobacco. It signed an international treaty, the WHO Framework Convention on Tobacco Control, in 2004 in which it committed to take measures to control tobacco use in the country. Earlier in 2002, the government of Pakistan promulgated ‘Prohibition of Smoking and Protection of Non-smokers Health Ordinance 2002’, outlawing smoking at public places.

However, the presence of laws without a strict enforcement hardly serves any purpose and that has been the case so far in Pakistan where people continue to fall to the lure of smoking. As per a report by the State Bank of Pakistan in 2011, as many as Rs 200 billion are being blown away by the people to keep up with their addiction to smoking in Pakistan every year.

Experts believe that one of the reasons of smoking in Pakistan owes to the use of advertising, albeit illegal, by some cigarette companies which use the loopholes in the existing laws to carry out subtle, innovative advertising to popularise their brands. Various consumer protection bodies have long expressed concern over this illegal advertising by the cigarette companies and it is perhaps this consistent clamour raised by the consumer protection bodies that the Ministry of National Health, Services, Regulations and Coordination (NHSRC) has come out with a new set of guidelines to reinforce the already existing laws to fight the illegal advertising activities of certain cigarette companies.

These new guidelines issued as a statutory notification (SRO) dated 31st December 2013 and coming into effect on 31st May 2014 have the potential to curb the unscrupulous activities of cigarette companies in branding their products by adopting innovative methods which appear to bypass the prevalent rules and regulations prohibiting any kind of advertising of the tobacco products.

According to experts with a pulse on the cigarette industry, the need for the new guidelines is explained in a number of incidents in which various cigarette companies have been found to be using subtle and innovative ways to advertise their products by circumventing the prevalent rules and regulations prohibiting any kind of advertising of the tobacco products.

According to media reports, show-cause notices were issued to three known cigarette manufacturing units which were directed to stop all illegal cigarette promotion activities after they were found involved in advertising their brands through different means, including advertisement boards on shops, free sampling, consumer incentive schemes, in clear violation of "The Prohibition of Smoking and Protection of Non-Smokers Ordinance 2002".

According to a senior official of the Ministry of National Health, Services, Regulations and Coordination (MNHSRC) the government has announced a zero tolerance for the cigarette manufacturers indulging in illegal advertisement of tobacco and tobacco products.

"The government is keeping a close watch on the activities of cigarette manufacturers which violate the relevant laws and protocol," the official said while commenting on the growing incidence among cigarette companies to use subtle and innovative means to advertise their products.

Understanding the challenges the authorities face in the weeks and months ahead, anti-tobacco forums believe that an efficient and effective enforcement of the anti-tobacco promotion laws is the only way to check the growing incidence of smoking which is luring, according to an estimate, over a 1000 young folks every day, exposing them in the long run to the grave dangers smoking causes to the human body.

According to a representative of The Network for Consumer Protection, the new guidelines are likely to curb the illegal advertising of tobacco products. It was important to implement these guidelines with sincerity as the social marketing could influence smokers to voluntarily accept, reject, modify, or abandon their smoking behaviour. It is a high time to educate people about the hazards of tobacco, particularly schoolchildren.

Anti-tobacco laws up in smoke