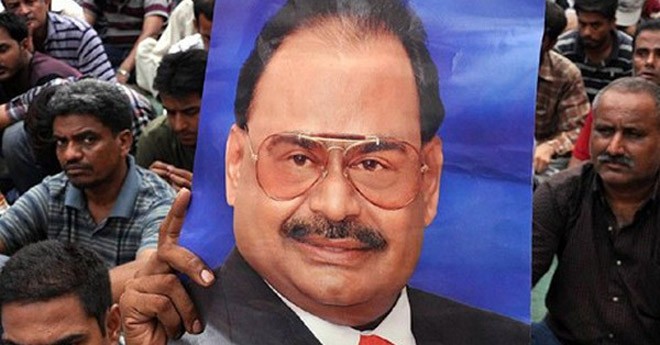 The Muttahida Qaumi Movement (MQM) must have taken a sigh of relief when the news broke out on Geo on Wednesday that the Scotland Yard has decided to drop the ‘incitement to violence’ investigation into Altaf Hussain and there will be "no further action".

This inquiry dates back to Pakistan’s general elections last year when the MQM leader delivered a rousing speech to his diehards and angered mainly the PTI workers who had staged a sit-in at the Teen Telwaar.

There never was any chance that this particular inquiry into the MQM leader will go anywhere because of the contentious interpretations of the words that the self-exiled leader used. The Crown Prosecution Service told the police that Hussain cannot be prosecuted successfully on the basis of the words uttered.

But the MQM’s worries are far from over as the party leadership is faced with three investigations now and the time clock is ticking fast.

Pakistan and Pakistanis all over the world were stunned when the news broke out -- first of all on Geo -- that the Specialist Operations Unit of the Metropolitan Police has arrested Altaf Hussain from his North West London residence on suspicion of money laundering. Due to Altaf Hussain’s immensely important political profile and stature of his party in the Pakistani politics, the news of Hussain’s arrest made global headlines. The MQM tried to downplay the news initially but later on admitted that Hussain is a suspect in the money laundering investigation.

So how did it come to this pass? Nothing else but the killing of the estranged MQM former convenor Dr Imran Farooq in London on September 16, 2010 has initiated a chain of events that are threatening to take the MQM leadership into unknown and dangerous territories. It can safely be said that if Dr Imran Farooq was not killed on the streets of London then there would never be any investigation into the MQM leadership, no matter how they conducted their financial affairs and how much wealth the party amassed in London in real estate and cash.

The police in Britain have known how the MQM is operating in Britain all along but looked the other way and rather supported the party in many ways and ensured that Altaf Hussain is not harmed in London by his opponents. It will not be an exaggeration to say that the properties owned by Altaf Hussain are not even a tiny fraction of what hundreds of Pakistanis, including individuals linked with the PPP, PML-N, PML-Q, PAT, PTI, own in Britain in terms of their worth. Even the cash that has been seized by the police is not a big deal and several rich Pakistanis spend such amounts without a care in the world only during summer but as it goes the one who gets under the scanner is the unfortunate and the troubled one.

The police in Britain have known how the MQM is operating in Britain all along but looked the other way and rather supported the party in many ways and ensured that Altaf Hussain is not harmed in London by his opponents.

MQM was operating all in peace here but all of that changed when Mohsin Ali Syed and Muhammad Kashif Khan Kamran assassinated Dr Imran Farooq and caused the kind of headache to the party that it has never known before and something no political party would like to be investigated for. Both are believed to be former activists of All Pakistan Mohajir Students Organisation (APMSO). Scotland Yard has interviewed at least a dozen MQM-linked individuals under caution in relation to Dr Imran Farooq but only Iftikhar Hussain Quraishi, Altaf Hussain’s cousin, has been arrested and put on bail.

Scotland Yard detectives believe that Dr Imran Farooq’s killers were helped in London and suspect that Quraishi was in touch with one of the men during his stay in London on a student visa. Scotland Yard confirms that its liasing with the Pakistani authorities for the extradition of the two men and sources have confirmed to The News on Sunday that Pakistan has signalled to the UK that the two men will be handed over but hasn’t given a timeframe yet.

TNS is aware that the first letter about the two men was sent to Pakistan more than eight months ago; it took Pakistan’s Interior Ministry over four months to acknowledge the receipt of the request for legal assistance in tracing the suspected killers of Dr Imran Farooq who are believed to have been snatched by Pakistani spies at the Karachi airport after they reached back in Pakistan via Sri Lanka after completing their mission in London, leading from Heathrow Airport just a few hours after the murder.

It was during the investigations into Dr Imran Farooq killing that the Scotland yard raided the International secretariat of the MQM in December 2012 and found around £200,000 in cash, promoting the police to start the money-laundering investigation. In a stunning raid on the house of Altaf House a year ago, the police found around £280,000 in cash from his house. Including Altaf Hussain, now three people are on the police bail in relation to the money-laundering probe linked with Dr Imran Farooq’s killing.

Legal experts are of the view that the police took unusually long time to arrest Altaf Hussain and knew what they were getting up again. That’s the reason why the British Consulate in Karachi was told 3 days in advance to beef up security and according to the sources the government of Pakistan was made aware 12 hours in advance that a major arrest affecting Pakistan will be made in London.

Criminal law expert Shahid Khan, a solicitor at the Advice Wise Solicitors, says that Altaf Hussain may have been asked by the investigating officers to provide details, names, address, telephone numbers of the people who may have lent or given the money to Mr Altaf and during the period of bail the police would carry out further interviews of the people who may have given Hussain money (witnesses).

Khan said: "If the police are satisfied with the source of the funds then by the next bail to return date he should be cleared of the allegations against him. On the contrary, if they are not then others who had tried to assist him may also be suspects and could find themselves as being charged for this offence (money laundering) or attempting to pervert the cause of justice. The financial investigators have to be satisfied that all the funds are from legitimate sources and taxes have been paid on the concerned amounts by the persons who would be claiming to have given money to Hussain as a gift or a loan."

He said that Hussain’s all bank accounts, bank statements will also be looked into by the police for the past six years (from the date of his arrest). "His inland revenue accounts will be checked to see what he has declared and accordingly how much (if any) tax he has paid to the UK Government."

This means that the party also faces inquiry into the tax affairs. The tax evasion, if proven, will mean that the MQM will have to pay a fine but the money laundering probe is much more serious and the MQM as it stands is in a defiant mood.

Altaf Hussain is aware of the scope of the investigation and has been realistic about it. The scenes that were witnessed after Altaf Hussain came out of the Southwark Police station were unbelievable. Its not that dozens of men and women who cried at seeing him were organised or managed to do so. Hussain commands devotion and in large parts its genuine and based on conviction of his followers who adore him for what he has done for Mohajirs, through survival skills and doggedness all along.

"Do not resort to violence if I am prosecuted. Be patient and stick to the ideology that I have taught you. I am like a Hussaini and will not bow my head before the forces of Yazeed," Hussain told his supporters soon after his release and in another speech since then.

He has conveyed to his supporters to be prepared as these investigations could go anyway. It’s the support of his diehard activists which will matter the most to Altaf Hussain in the coming days and the influential leader is exactly working on that plan. Increasingly, the outcome of these investigations will matter less to him as Hussain looks mentally prepared for the unpredictable. He is aware that things are not looking good but he shows the strength of nerves as he has issued a rallying cry to his supporters -- ordinary men and women in urban Sindh, not the leaders and the chattering classes.