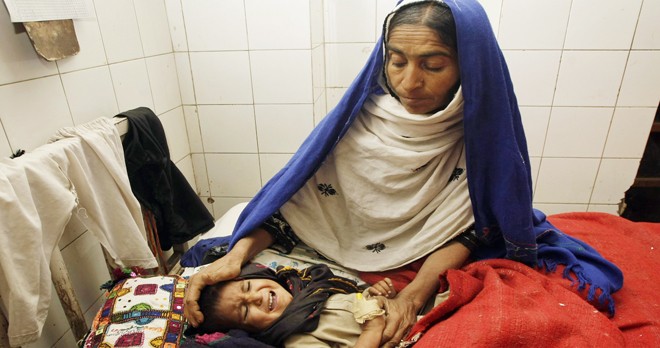 "I repeatedly told you that vaccination is dangerous for our children but you paid no heed to my words rather you presented your flawed arguments. I remained adamant that polio vaccination is a plot against Islam but you never listened. Now do you hear the wailing parents who lost their children due to anti-measles vaccines? I am not going to vaccinate my children". This is an excerpt from an argument with a friend who opposes vaccination in Pakistan.

At the time when the current government is celebrating the successes of its first parliamentary year, the anti-measles vaccines have struck havoc in Khyber Pakhtunkhwa. In the wake of vaccination drive against measles to protect children under the age of 10 years, at least 12 children have died, the reasons being ‘expired vaccination or untrained vaccinators’.

The sad incident has sparked a debate on as to what caused the deaths. Officials deny the link between measles and those deaths. As per report released by the Directorate of Health, the staff who administered vaccines lacked training and sufficient knowledge to administer the measles vaccines. This is the height of the irony that those who administer the vaccines are untrained. Some doctors claim that the vaccines lost its efficacy due to prolonged outages in hospitals. The officials maintain that vaccines were safe but the deaths have been caused by negligence.

No matter whatever is the cause, expired vaccines or the untrained staff, the incident is too dangerous to jeopardize the future vaccination efforts. The incident may cause the people to lose confidence in vaccines that the government is trying hard to build. Moreover, the beliefs formed by mishaps are difficult to alter. The deaths have unleashed a new debate on the efficacy of polio vaccines as well.

I myself hail from a region which is known for its resistance to anti-polio vaccination. Several of my village fellows have lost their lives protecting the polio workers. Polio workers have been consistently attacked to derail ‘the war on polio’. In the wake of such public distrust of vaccination, even a minor mistake might turn deadly in framing the beliefs of the masses. However, three fatal mistakes have been made in this regard.

Of these mistakes, the first and foremost is the CIA’s fake vaccination campaign to hunt Osama bin Laden in Abbottabad. The damage in this regard that has been caused by the CIA is beyond comprehension. This fake campaign has reinforced the unfounded beliefs of the skeptical masses. The religious fanatics were given a lifetime opportunity to propagate against the anti-polio initiative.

The second mistake has been made by administering measles vaccines through untrained staff. The incident has sky-rocketed the skepticism of the masses in the vaccines. And finally in the wake of this accident, the journalists, driven by a wave of emotions, reported in a way that has caused immense damage to the efforts of obliterating polio and other related diseases.

The incident is not a small one. It is enough to derail the efforts of the entire world to flush out polio from Pakistan. It is a need of the hour to fix the responsibility. However, the irony is that responsibility has never been fixed in this country. Commissions are formed to investigate controversial matters and then the findings are brushed under the carpet. The findings of the commission or investigation must be made public and those found guilty, should be punished. There is no room for such deadly mistakes.