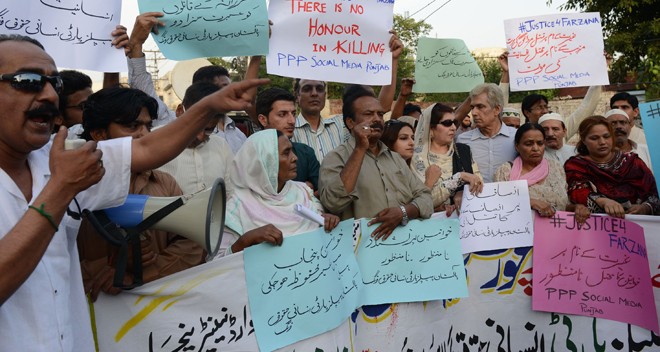 On May 27 2014, Farzana Parveen came to Lahore High Court seeking justice. Instead what she got was bricks hurled at her by her own blood relatives. Her crime: she married a man of her choice against her family’s will. What is more disgusting about this incident is that the crowd, including the police, looked on and nobody tried to intervene.

Following the incident, Farzana’s father justified his actions as necessary to restore his family’s honour. But surely, killing a defenseless pregnant woman, and that too one’s own daughter, can only be termed dishonourable.

Farzana’s killers are not random actors and her murder is not an individual act of wrongdoing. Rather, in order to understand how Farzana could be murdered in broad daylight with impunity, one must take a hard look at the wider culture which legitimises violence against women. A culture which views women as a property of men, and defines male honour in terms of an ability to control women, creates the conditions in which patriarchal oppression becomes possible. As a result, women who challenge male authority by attempting to assert control over their own lives are endangered.

These cultural traditions are categorically supported by our legal system. Thus we have a history of offenders who were not punished for crimes such as honour killing and rape. In such cases, criminals are pardoned through an abuse of diyat laws.

Ironically, Farzana’s own husband escaped punishment for killing his first wife as he was forgiven by his son under these laws. In such scenarios, where the next of kin are only too eager to forgive the perpetrators, the police are also unable to offer any meaningful protection to women.

While blaming legislative and institutional failings, which perpetuate the culture of violence against women, we must not overlook the role of women who wittingly or unwittingly become agents of their own oppression. In the context of honour killing, the role of women can be analysed at three levels: the victims, active collaborators and silent enablers. The category of the victim is literal and self-explanatory, and includes all women who are subjected to acts of violence such as Farzana. Active collaborators are those, who through their words and actions, participate in the actual events of violence. In Farzana’s case her sister, Khalida Bibi, who has attempted to absolve her father and brothers by blaming Farzana’s husband, becomes an active collaborator of Farzana’s murder.

Women must hit the street and launch a popular, non-cooperative, activist movement.

Our history is filled with examples of active collaborators like Khalida Bibi. A more shocking example is the famous honour killing of Samia Sarwar. The enabler of Samia’s murder was none other than her mother. Under the pretense of peaceful resolution, Samia’s mother smuggled in her killer.

A third category of women are the passive enablers who collude with the system of gender based violence through their silence and inactivity. Sadly, outside of a few big cities, there are hardly any women rights activists who stand up against this violence. In the case of Farzana, demonstrations have been restricted to pitiful number of protesters.

In our smaller cities and remote areas, most of the people are simply indifferent to this incident. Conditioned by patriarchal notions of male honour, they do not even view such actions as immoral, and therefore see no reason to act. Thus the majority in Pakistan are passive enablers who contribute to the perpetuation of this brutality by remaining silent on such issues. It is because of their inaction that barbaric and ruthless killing of women in our society continues without any interruption.

The silence of the enablers has, in fact, emboldened men and women who are active collaborators in crimes against women.

The real problem facing us today is that apart from a few brave women in our society, the rest are unwilling to leave their comfort zones. The majority neither raises their voice against gender discrimination, nor do they support the struggles that are being waged on their behalf.

Women’s plight in Pakistan cannot be changed simply through journalistic or scholarly efforts, of which there have been plenty. A real and meaningful challenge to this patriarchal system will only arise if women unite, form structures of solidarity, and struggle collectively against gender based violence. Women must hit the street and launch a popular, non-cooperative, activist movement if they really wish to change their destiny. History tells us that political and judicial change is impossible unless there is a popular demand and pressure from the masses. Until there is widespread support from the masses, the nascent dissident voices amongst us will continue to be fragmented.

The biggest hurdle in the formation of such a popular movement is women’s fear for their security. The threat of persecution is only too real as the gruesome fate of Farzana illustrates. But we must draw inspiration from the examples of courageous and defiant women like Mukhtaran Mai, Kainat Soomro and Rukshana Bibi. All three women, who hailed from remote and highly traditional regions of Pakistan, overcame threats of death and torture to become iconic activists for women’s rights in Pakistan.

Women’s activism for their rights will make political parties realise that this is a serious electoral and vote bank issue. This will result in politicians taking women’s rights more seriously. Eventually this will translate into legislative activity necessary for carrying out constitutional amendments safeguarding women’s rights.

Reforms aimed at increased education and literacy can provide the platform and support structures necessary for the generation of a successful women’s movement. Through an education which emphasises respect for women’s autonomy we can also cultivate a wider acceptance of women’s right to make independent choices. Increased representation of women in the workforce, particularly law enforcement agencies and the judiciary, will also help in safeguarding women’s rights movements and preventing women’s oppression.

Meaningful efforts of national development cannot remain restricted to mega projects of building motorways, metro buses and trains. The need of the hour is to focus on human development and to ensure rights and security for vulnerable sections of our society, particularly women, who are facing discrimination.