The spectre of fascism 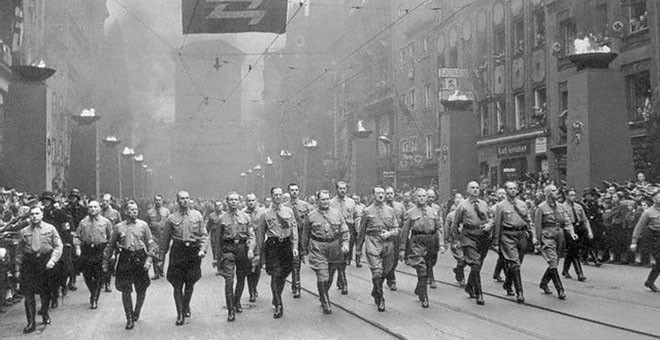 A fascist party can be democratically elected, and anti-democracy leaders can be popular. The Germans know it better than any other nation in the world. And they also know the horrors that accompany popular fascism.

It would be incorrect to say that Adolf Hitler was the most popular leader during Europe’s Interwar period, and that his Nazi Party enjoyed substantial public support from 1920 to 1945. Hitler and his party took the reins of Germany after a number of electoral failures. The popularity of the Nazi Party among Germans grew incrementally; from 6.5 percent votes in May 1924 to 43.9 percent in March 1933.

Not all Germans backed Hitler’s nationalistic ideology and politics, but quite a lot did. There were reasons behind the rise of fascism in Germany and some other European countries -- the economic recession following the World War I was one of them. In 1920, the number of unemployed people in Germany was 1,862,000, in 1932, it increased to 6,042,000. Germany needed a strong leadership which could rebuild the country.

But can an analogy be made between the success of the German Nazi Party under Hitler and the historic victory of the Hindu nationalist Bharatiya Janata party (BJP) under Indian Prime Minister Narendra Modi?

Modi’s BJP won the recent Indian polls by a landslide victory, securing 282 seats in 543-member parliament. However, the BJP and its allies received only 38 per cent of votes. Most Indians did not vote for Modi, who led a phenomenal and high-tech election campaign that focused mainly on restoring India’s faltering economy.

Modi promised development to the Indian people, and it is true that a large number of Indians ignored Modi’s alleged involvement in the 2002 communal riots in the northwestern state of Gujarat and fell for his development mantra. For most Indian voters, economy was more important than the future of secularism in India. They apparently did not care whether a fascist or a progressive leader got them jobs.

Modi has been touted as a leader who spearheaded the economic success of Gujarat as its chief minister. His supporters argue that he would now use the same model of development for the economic growth of the whole of India. But many analysts have criticised Modi’s economic policies in Gujarat, and they fear that his tenure in New Delhi as India’s most powerful man could be an era of "economic fascism."

"Bloodshed is inherent to this model of development," says Indian writer and activist, Arundhati Roy. "There are already thousands of people in jails. But that is not enough any longer. The resistance has to be crushed and eradicated. Big money now needs the man who can walk the last mile. That is why big industry poured millions into Modi’s election campaign." Roy believes that "India has chosen a genocidal development model."

Shakuntala Banaji, a lecturer at the London School of Economics, says that not only Modi’s economic outlook is fascistic; his entire politics is anti-secular and anti-humanistic.

"Modi’s election campaign and the vociferous anti-humanism of his supporters on and offline have already been undermining secular pluralism in India for several years. I have heard people say things like how they don’t care about mass murder as long as their family enjoys certain privileges, and how they like to see a strong man at the helm who can "put the Muslims in their place," said Banaji, adding that in coming years India would see a crackdown on religious minorities, government critics and whistleblowers.

But the Indian people have chosen Modi and the BJP. They rejected the Indian National Congress and the Gandhis by casting their votes, not by resorting to violence. It is their democratic right to elect whoever they like. But again, a fascist party can be democratically elected, and anti-democracy leaders can be popular.

Following the economic downturn in Europe, which began in 2008, the right-wing and anti-immigrant parties started to perform better in national and European elections. Even the once non-existent far-right parties have now a good share of votes. The recent European elections show similar trends. In Germany, France and the UK, populist right-wing groups have emerged victorious. The rise of the new European right worries many Germans.

"Liberal parties are taking a back seat in Germany and Europe. The left politics is almost dead. I would interpret it as the revival of fascism in Europe. Hatred against minorities and immigrants is on the rise," said Annika Benner, a German student. She says that what used to be a negligible phenomenon restricted to one or two countries is now a dominant trend across Europe.

So what impact will the Modi phenomenon have on neighbouring Pakistan? Liberal and progressive Pakistanis argue that Pakistanis have never elected Islamist parties and that despite the fact that the Islamic Republic has witnessed a surge in extremism over the past decade, the religio-fascist groups still can’t make it to the country’s parliament. "Yes, we negotiate with the Taliban, but we don’t send them to legislative assemblies," a Karachi-based rights activist wrote on Facebook.

It is not true; there are many fascists in Pakistani parliament. And we must not be complacent about it. Religious extremism in South Asia is not an isolated phenomenon. Modi’s victory in India will certainly embolden and strengthen the Islamist parties in Pakistan. And they are already very strong. The fact that these parties don’t win the general elections by a landslide does not mean that they do not enjoy mass support.

The Muttahida Majlis-e-Amal -- an alliance of religious political groups -- had proven the theory wrong in 2002. The rise of conservative parties like Imran Khan’s Tehrik-e-Insaaf is another sign of how the right-wing politics has defeated secular and liberal ideologies in the country. Then, the so-called liberal parties like the Pakistan People’s Party are never shy to play the "religious card" for the sake of power. Prime Minister Nawaz Sharif’s Muslim League has many members who openly support banned terrorist organisations or are affiliated with them.

The popular vote does not give any group to silence the minority’s voice. Those who are against Modi and his politics have been defeated in recent election. In Europe, the far-right is gaining ground. The secular people in Pakistan are marginalised and increasingly fear for their lives. The specter of fascism is haunting the world. And that is why progressive forces need to be united more than ever.

The spectre of fascism