On the wrong side of law 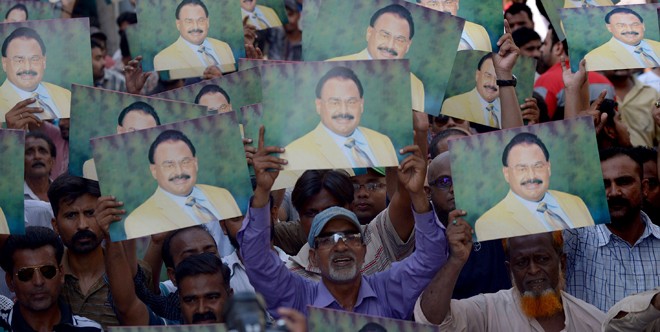 For 22 long years, Altaf Hussain was enjoying a privileged life in the United Kingdom and calling the shots in distant Karachi through the street-power of the Muttahida Qaumi Movement (MQM) founded by him in 1984 and led unchallenged to-date.

But all good things must come to an end and this is what seems to have happened to the 60-year old politician. He is now on the wrong side of the law and has been taken into custody by the Scotland Yard, a police force that is both venerated and dreaded.

As a British citizen, Altaf Hussain has to answer charges of money-laundering, which is a serious crime in the UK. The media has reported that the sentence for the crime under the law amended and toughened in 2002 is a maximum 14 years, which in our context amounts to life imprisonment.

Altaf Hussain had moved to a secure place when he arrived in UK after leaving Pakistan in the wake of an alleged assassination attempt in Karachi in December 1991. He was granted political asylum in 1992 and British citizenship 10 years later. Away from home and his diehard Mohajir followers, he still had the satisfaction that his political base in urban Sindh was intact.

There have been reports, including those by the international media, that Altaf Hussain had endeared himself to the British authorities after the events of 9/11 by writing a letter to Prime Minister Tony Blair offering to gather crowds to condemn terrorism in Pakistan and collect human intelligence on the Taliban and their allies. The MQM had denied it and the fact that he has now been arrested could weaken the claim of those accusing him of being close to the British government.

Most Pakistani politicians and commentators have pointed out that there is rule of law in the UK and Altaf Hussain would, therefore, get a fair trial. In a way, this is also an admission on their part that only in the UK someone of the stature of Altaf Hussain could be arrested and charged with a criminal offense. No such thing could have happened in Pakistan because any action against him would have been quickly condemned as ‘political victimisation’ and there would have been so much violence that he would have been freed in no time.

It is remarkable that Altaf Hussain founded and turned MQM into Pakistan’s fourth biggest party on the strength of its middle class base.

Shutting down Karachi, Pakistan’s biggest and richest city, is an easy job for MQM and it can also bring life to a standstill in some other cities in Sindh, including Hyderabad and Sukkur. In fact, Karachi was shut down for two days after Altaf Hussain’s arrest in London as violence erupted in parts of the mega city even though no call for strike was given. However, it soon became evident in case any evidence was required as to who could be behind all this when life quickly returned to normal on the third day on June 5 when the all-powerful MQM Rabita Committee instructed the citizens, including traders and transporters, to return to work.

And the MQM Rabita Committee made the decision after Altaf Hussain was allowed by the Scotland Yard to make a phone call to the MQM central secretariat in London and speak for 10 minutes to his party aides and also Afzaa Altaf, his only child from a broken marriage to Karachi-born Faiza Gabol. The MQM leadership had earlier demanded to hear Altaf Hussain’s voice so that it is satisfied that he is alright.

It is obvious that Altaf Hussain knew what was coming. He had publicly stated in one of his numerous telephonic speeches to his supporters in Karachi that he could be arrested. The urgency with which his party leaders recently tried to acquire a Pakistani identity card for him from Pakistan’s High Commission in London also betrayed an anxiety that has seldom been witnessed in the past. Did he want to leave UK and return to Pakistan after having stayed away for so long due to security concerns? And would the Scotland Yard have allowed him to leave until the case against him was decided? It seems there was no way he could have left the UK at this stage.

There have been suggestions that Prime Minister Nawaz Sharif’s government was informed about Altaf Hussain’s impending arrest when the British High Commissioner met Interior Minister Chaudhry Nisar Ali Khan a day before the MQM leader was apprehended. This has not been confirmed, but cannot be ruled out because there was real risk of violence in Altaf Hussain’s power-base, Karachi, in case of his arrest. The British consulate general office in Karachi was promptly closed down as the shocking news of his arrest reached the city and the people started shutting their businesses and going home to avoid harm.

Some MQM leaders in both Karachi and London were initially in a state of denial about Altaf Hussain’s arrest, but the news could not be kept from the public for long. In fact, it became breaking news and the international media too began reporting it with much interest. After all, it was the first time that a Pakistani politician of Altaf Hussain’s status had been held on criminal charges abroad. Until then, he was considered too strong politically to be brought before the law.

As for Prime Minister Nawaz Sharif’s government, it is obvious it cannot do much to help Altaf Hussain except to facilitate consular access for him as long as he is in custody. It would also be hoping that Altaf Hussain’s arrest won’t add to the many problems and challenges, including those related to the law and order situation in Pakistan’s economic capital, Karachi, it is already facing. Instability in Karachi would affect the pro-business Nawaz Sharif government’s plans for economic revival. The PPP-led government in Sindh also cannot afford instability in Karachi after having recently brought the MQM into its ruling coalition in a bid to keep the urban centres in the province calm and stable.

There are many remarkable things about Altaf Hussain. It is remarkable that he founded and turned MQM into Pakistan’s fourth biggest party on the strength of its middle class base. It is also remarkable for a politician to retain his hold on his supporters despite being away from the scene for over two decades.

Besides, he has overcome defection by some of his close aides, kept the MQM intact despite pressures by the state and various interest groups and suffered personal tragedies like the murder of his uncle Nasir Hussain and nephew Asif Hussain. Media reports said 3,576 cases, including some of criminal nature and corruption and mostly politically motivated were registered against him and then struck down with a stroke of pen under the controversial National Reconciliation Ordinance (NRO).

Altaf Hussain was arrested thrice in the past and then freed, but that happened in Pakistan. His fourth arrest has taken place in the UK and getting away from the British law won’t be easy. Presently, he is facing only the money-laundering case, but this could be tougher than the one concerning the murder in 2010 of senior MQM leader Dr Imran Farooq, in which Altaf Hussain hasn’t been implicated yet. And the legal battle he is going to wage would not only decide his fate but also that of the MQM.

On the wrong side of law