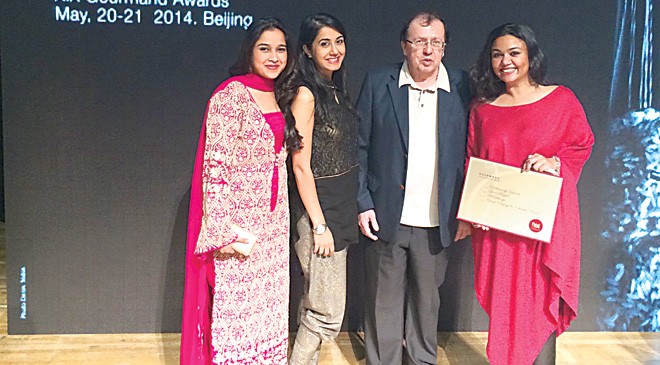 When Kiran Aman, the brains behind independent publishing house Markings, decided to create the country’s first-ever desert book, she didn’t know that it would go on to win at the prestigious Gormand Awards a year and a half later. The ambrosial delight titled Deliciously yours was a collaboration with renowned chocolatier Lal Majid. Lal’s painstakingly detailed, delectable recipes were the book’s focal point, together with fabulous food photographs by Adeela Badshah, laid out by Tuba Arshad. The resulting book: hard-bound, glossy, with a stream of molten chocolate pouring down its cover, is an absolute collector’s edition for any cooking aficionado. We all know that food can win hearts – encapsulated in a hardcover, visually inspiring tome, it can also apparently win a few awards!

"I didn’t even know of the Gourmand Awards," confesses Kiran. "The awards committee contacted us on their own and eventually, we got nominated in three cookbook categories: Best Chocolate Cookbook, Best Pastry Sweets Cookbook and Best First Cookbook in Pakistan. When I saw the other books we were up against: contenders from France and Italy, among others, I felt sure that we couldn’t win. These are countries that have been producing cookbooks for decades. It was a huge surprise when we won in the Best Pastry Sweets category!"

"Later, I was told that our book won because of its content. The jury appreciated that we focused just on food and additionally, our quality and photography was at par with the others."

This is an achievement in itself. In a market where cookbooks usually resort to low-quality, paperback editions with blurry images and grammatical blunders, Markings chose to invest time, effort and funds into producing a book that met international standards. Yes, it also meant that the book was more expensive than your average cookbook but the quality just could not be compromised – an all-important factor for nitpicking perfectionists Kiran and Lal Majid.

The precision and passion paid up when the book picked up an award. Since the author, Lal Majid, was not in attendance due to some preoccupations, Kiran went on stage to receive the award. It was a proud moment for Markings and for Pakistan.

"We won the award but Adeela, Tuba and I also experienced the first Cookbook Fair in Beijing. For three days, we met foodies from all over the world," shares Kiran. "I’ve been to the Biennale Art fair in Venice where everybody is fashionably dressed and snooty. In contrast, nobody really bothered to dress up at the cookbook fair here – it was all about food! Countries may be torn apart by politics and wars but food is something that bridges all gaps and brings people together."

As a publisher who often delves into visually creative cooking books, it was a learning experience for Kiran. Publishers were allotted a ‘rights’ table where they would gather and could be approached by anybody who wanted to buy the rights to their book and reproduce it in another country. Kiran also attended two conferences. One discussed that cookbooks were veritably art-books while the other pinpointed new trends in cookbook publishing. Tuba and Adeela attended a talk based on the demonstration and styling of food. They also spoke in a talk titled ‘Chocolate and desert’, where they discussed the concept behind Deliciously Yours.

Markings’ latest venture, a bilingual Urdu-Hindi odyssey of the vegetarian cuisine of the Hindu Pathans of Dera Ismail Khan, titled Zaiqay Frontier Kay – Dera Ismail Khan Kae Bhulay Basray Pakwan (Flavour of the Frontier – Dera Ismail Khan’s Forgotten Recipes) was launched at the fair. The recipes were penned by the late Pushpa Kumari Bagai and were presented at the fair by Kiran and Atul and Dipa Bagai, the writer’s son and daughter-in-law. "We talked, to a very multicultural audience, about peace and cooking, about how Pakistan and India are separate countries but we share similar food, language and values," recounts Kiran.

The fair, of course, was also a chance to observe cookbooks from around the world, from basic recipe booklets to the wacky, such as a German book detailing different ways of cooking chocolate – with almonds, spices and even insects!

"I was very inspired by Nimi Sunilkumar who I met at the fair. She is an author from Kerala, India and her book Lipsmacking dishes of Kerala won third prize in the ‘Local Food’ category. She had studied to be an engineer but once she got married, her conservative in-laws refused to let her work. Instead, she began writing from home but when her articles on controversial women’s issues got printed, her family also forbade her from writing. Eventually, her husband suggested that since she cooked so well, she should create a recipe-book. Her in-laws complained that she was no one to recount recipes when the aged women in the family were the actual cooking experts! Nimi persisted, studied layout and design through an online course and created her book all on her own. It’s now selling well on amazon.india! She was there at the fair, in a sari and a simple plait, to all appearances just a typical housewife from Kerala but, in truth, a woman who’s created her own success story. She was my hero."

Similarly, in many ways, Kiran Aman, Lal Majid, Adeela Badshah and Tuba Arshad are heroes for us. At a time when women are decimated to the lowest denominator of society, women like Kiran Aman or Sharmeen Obaid-Chinoy act as ambassadors for Pakistan at world-renowned platforms. It’s difficult but still possible to rise against all odds, to win an award and applause solely on the basis of hard work and passion. Kiran Aman, with her unique publishing house, has been working hard to create books that raise the bar in standard and content. This award is just one accolade, paving the way for more of Pakistan’s women to step out and show the world what they can do!