Putin’s pivot to the East 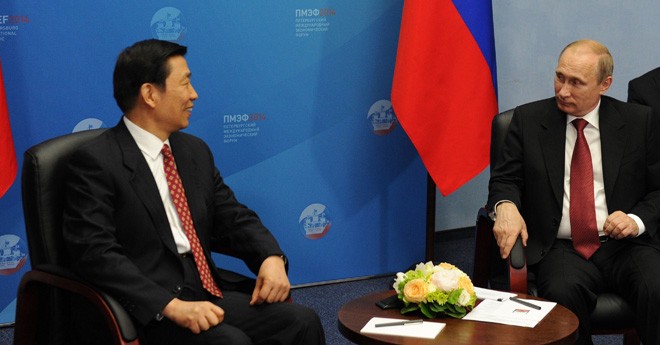 Russia has begun to look east. Amid strained relations with the West, rising nationalism and anti-western rhetoric at home, Putin has articulated his pivot to the East. In the face of potential European sanctions on Russia, he has demonstrated with defiance that he has other centres of geopolitical powers to turn to; to communicate to the world that relation with the Europe matters no more.

Putin’s recent visit to China and the subsequent conclusion of several deals between Russia and China has brought the two countries, who had always mistrusted each other, to a platform of renewed bilateral cooperation.

The West believed that the recent Ukraine episode pushed Russia to a strategic solitude. America had to rely on its time-tested comrade, Europe, to rein in the Russian aggression. The European leaders looked on, procrastinated and disagreed over finding an appropriate response to stop the Russian incursion in Ukraine and Crimea.

Europe is largest recipient of Russian gas; revenue from gas and oil form a major chunk of the Russian budget. The European threat of economic sanctions, though empty but louder, loomed larger over the Russian horizon. However, the economic stick failed to deter a more resurgent Putin with his old fashioned power politics. Putin, as Wali Nasr puts it, "seems willing to sacrifice economic interests for old fashioned power politics -- grabbing territory and building spheres of influence". In addition to this, growing popularity and resurging nationalism at home, at a time when American influence has badly dipped in the world affairs, has encouraged Putin to pursue a more aggressive foreign policy.

Europe is obsessed with commercial interests and worried more about rising gas prices and its export market in Russia. It is certain that no containment of Russia is possible without European assistance. American leaders complain of European fecklessness in the face of Russian forays in the Black Sea and Eastern Europe. Europe does not want a serious rupture with Russia. Its leaders fear that Russia might close the taps to the Europe or sell gas expensively, plunging Europe into a depression.  In addition to this, America being tired of playing the role of global policeman has to rely on the Atlantic alliance. Putin’s belligerence is driving a wedge in the Atlantic alliance.

Russia badly needed a new market to diversify its gas exports in order to face up to the European sanctions. The recent agreement with China is a watershed event for Russia in order to dilute the European threat of sanctions against it.

Russia badly needed a new market for its gas, to diversify its gas exports, in order to face up to the European sanctions. During his recent trip to China, Putin concluded a 30-year agreement between Russia and China. The agreement is a watershed event for Russia in order to dilute the European threat of sanctions against Russia. As Putin puts it, the contract is the largest in the history of Russian gas supply. The agreement is very critical both in terms of economic and geopolitical power balance.

The agreement between Russia and China is termed the beginning of a Russian pivot to Asia. Negotiations for this deal were underway for a decade. This agreement has serious repercussions for Europe. The gas supply to China may drive up the prices of natural gas in Europe after 2018 and will force EU to look for alternate supplies. In addition to this, at the end of May, both the countries are expected to start joint military exercises near the islands disputed by Japan. Moreover, both the countries have signed a memorandum to cooperate on production of airliner to compete with Boeing and Airbus.

The new pivot has come at a time when American pivot to Asia is suffering from serious problems. Last month, Obama visited Japan to clinch a significant trade deal but he failed to succeed in getting one. On the other hand, as an Asian power, a bolstered Russia will now seek an active role in balance of power between Japan and China as well as a role in the Korean issue. Thus, Russia has ambitions in pacific as well. The deal has marked the beginning of a new era of partnership between the two countries that have always desired parity with US in global affairs. The new deal underscores Russia’s shift towards Asia. The two pivots are at loggerheads and Asia-Pacific is the region where the future of politics will be decided.

Putin’s pivot to the East