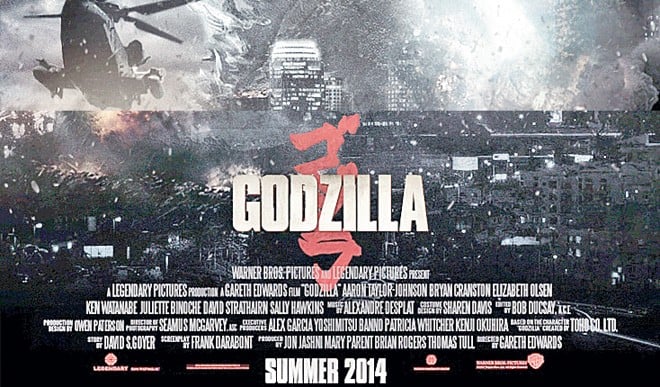 For this reboot, Brit director Gareth Edwards aims to pull off a Jaws, taking his time to build up the suspense and the various human characters before revealing the big bad to us. And it kind of works; when you finally see Godzilla in all his scaly, spiky glory he certainly makes an impact. And, if anything, the pair of Muto (Massive Unidentified Terrestial Organism) whose appearance precedes that of our

eponymous monster and who resemble nothing more than giant cockroaches – and who evoke Godzilla’s traditional enemy, Mothra from the original Japanese films – are even more creepily effective. The Mutos elicit mostly horror and revulsion (borrowing a visual cue or two from the monsters in the Alien movies) but Godzilla – who, thankfully, really does look like an updated version of his original Japanese self, unlike the atrocity from that awful Roland Emmerich/Matthew Broderick 1998 version – could even be classified as kind of cute in a quirky kind of way (that is, once you become used to his scaly grotesqueness). But that’s alright. It will certainly help to sell a lot more toys and it works too with Edwards’ nod to Godzilla’s ultimate evolution into a guardian of humanity in the later entries of the original Japanese series of films.

The big battles between Godzilla and the Mutos are mostly successful too, just about avoiding becoming mind-

numbingly repetitive (Michael Bay, are you listening?) because Edwards knows when to pull away. The director is almost as interested in showing us the aftermath of the encounters – as evidenced in vistas of the destroyed cityscapes of Honolulu and San Francisco presented to us – as he is in giving us blow-by-blow accounts of the melees themselves.

The film also carries echoes (albeit faint ones) of the atomic age anxiety and paranoia of the original as well as a moral rap on the knuckle for man’s hubris. As Ken Watanabe puts it: "The arrogance of man is thinking nature is in our control … and not the other way round".

developing its characters into fully rounded personalities so we actually care about their fates when the poo starts hitting the fan (something that Jaws did superbly). As it is, all the characters are mostly cardboard cut-outs, mouthing either inane or expository dialogue and the actors can only do so much with their lines. Scientist Bryan Cranston (from TV’s Breaking Bad) huffs and puffs in an endearingly,

B-grade schlock-fest way but Aaron Taylor-Johnson, as Cranston’s son, is as bland as can be when playing your average American G.I. by way of Captain America despite being buffed up to twice his size from his Kick-Ass movies. He has generally been better than this previously. Elizabeth Olsen and Sally Hawkins (so good in Blue Jasmine) are both fine actresses and are both wasted here as a damsel in distress and a worried scientist, as is the fine Ken Watanabe, as the Japanese monster expert who is warning us about what is to come. However, David Strathairn, usually the dignified voice of reason in most of his film roles, probably enjoyed playing against type as a macho US army general in a buzz cut ready to bomb the monsters to kingdom come the first chance he gets.

Cut to chase: The movie honours its legacy and the special effects are pretty good but the skimpy characterisation and scripting let the movie down.

The original 300, based on Frank Miller’s graphic novel of the same name, was a rousing, testosterone-fuelled action-eer. Of course, you kind of had to ignore the movie’s (and Miller’s) sidestepping of inconvenient historical truths such as the presence of (a larger number of) Thebans and Thespians along with the Spartans at the battle of Thermopylae.

There was also no mention of the Spartan slaves, the Helots, at least 300 of which also stood against the might of the Persian army. But since, at the time – the height of the Bush/Cheney/Blair-led Western coalition’s war against the evil Iraqis and Afghanis – the Spartans were supposed to represent the good guys (i.e. "the West") and the Persians stood for everything wicked, the mention of the supposedly democratic Spartans owning slaves would have unnecessarily muddied the waters and gotten in the way of telling of a macho, chest-beating tale as well as the political narrative being woven in the (Western) world’s media. However, devoid of context, there was no denying the  exhilarating power of 300, driven by its unique visual language, the graphic violence, the beautiful bodies (of both sexes but mostly of the male variety) and the manly speechifying of King Leonidas of Sparta (a very effective Gerard Butler). The movie’s success spurred a number of imitators on both the big and small screens (The Immortals, Spartacus).

Now, eight years later, comes the sequel (well, not quite sequel – it’s more of a "meanwhile" since it depicts events which were happening simultaneously while the 300 Spartans were battling the Persians at Thermopylae) as the Athenian general Themistocles (Australian actor Sullivan Stapleton) leads the Greek forces against the Persians at the battles of Marathon, Artemisium, and Salamis. While the racial divide is less clearly drawn this time around (since the Western allies are now almost done with their  misadventures in the Middle East and Afghanistan), the film still borrows heavily the look (and the gore) of the earlier film. But what it doesn’t have is the same verve and energy of the original (perhaps executive producer/writer Zack Snyder handing over directorial duties to Murro has something to do with that) and Stapleton doesn’t have the same presence as Butler either.

However, the movie does have a secret weapon in Eva Green. She is glorious (and gloriously sexy) as the vengeance-driven Artemesia, the Greek naval commander of the Persian navy. She alone almost makes this worth your time.

Cut to chase: Not as good as the original but Eva Green almost makes it worthwhile.