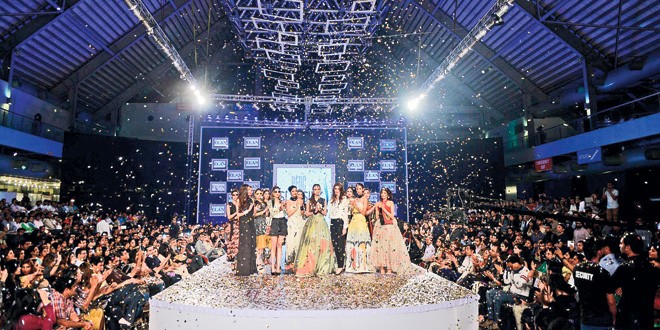 Society plays a big part in fashion and as a designer Khadijah Shah is at the helm of it. Call her queen bee or social butterfly, she does have wind beneath her wings and intends to fly very high with Élan.

She is a force to reckon with, but do her wings lend her the pretty air of a social butterfly or the power of an influential queen bee? What one can say assuredly is that Khadijah Shah has a definite flair for design; may it be with the classic ornamentation of her bridals, the pretty but edgy panache of her luxury-prêt or the mass-oriented realms of designer lawn, where she’s proven herself to be a force with her spot-on blends of florals, textures and embroideries on unstitched fabric. With her flagship store in Lahore and now an exciting, upcoming Élan Vital line generating hype with its comparatively affordable (under Rs 10,000) price points, Khadijah Shah is certainly steamrolling the market with ‘Élan’!

It’s no wonder that she’s often likened to Karachi’s powerhouses Sana Safinaz. Although much younger than the veteran designer-duo, Khadijah’s certainly chalking out a similar path of success; effectively dabbling into different sartorial genres; the veritable socialite designer creating spectacular socialite fashion. Often compared to Shehla Chatoor for the love both designers share for luxury, it has to be said that Khadijah is far ahead in the race, having a huge clientele in the Punjab, a lawn label in her kitty and now Élan Vital, her new line of prêt a porter that will finally make her label accessible and affordable.

Khadijah doesn’t consider herself to be a social butterfly, although she certainly looks the part: the mother-of-two who’s got it all together, suave in sunshades and a classic jacket at last year’s Élan Polo Cup in Lahore or dressed in her own creations at fashion week, meeting and greeting half the audience in the hall! The daughter of long-time politico Salman Shah and Anila Shah, who originally started Élan as a small but successful label catering to a niche clientele, Khadijah knows anybody who’s anybody in Lahore. "I know a lot of people simply because my family has been based in this city for a long time," she explains. "It would be rude if I saw them at an event and didn’t go to meet them. That hardly makes me a socialite, though. I usually hang out with just my old friends and barely attend any high-flying media parties!"

The high-fliers of Lahore love her, though. They flock to her lawn exhibits in droves, inevitably leading to ‘sold-out’ prints. Élan wedding wear is the label-du-jour at society weddings and the luxury-prêt regularly features on red carpets. At fashion weeks, the hall is packed on the day of an Élan showcase, with a large number of attendees leaving the venue once Khadijah has taken her bow. This, naturally, riles other designers showing on the same day but that’s just how Élan rules the roost in its home-city.

The business of fashion and fashion weeks, however, extends beyond Lahore. It is alright for Khadijah to orchestrate a grandiose Polo cup in Lahore, the first one of its kind before all and sundry followed suit. Logistically, she could handle the event easily from home base and besides, she’d want her friends and family to be in the guest list. It doesn’t make sense, though, when she doesn’t maximize upon business opportunities beyond Lahore, focusing and profiting from the money-making buzz of Karachi or the glossy sophistication of Islamabad or making her clothes more easily available to the customers that drive in from other towns and cities to buy right-off-the-rack or place orders for trousseau.

For now, Élan’s mélange of prêt and luxury-prêt may be found easily at the studio and flagship store in Lahore while only capsule collections are to be found at multi-brand stores elsewhere. Khadijah may commendably have participated in every fashion week organized by Lahore’s Pakistan Fashion Design Council (PFDC) but she is yet to showcase in the country’s ‘other’ fashion capital, Karachi, or in any other city, for that matter.

Things are about to change, says Khadijah. "I’ve always wanted to be part of a fashion week in Karachi but hitherto, council loyalty prevented me from doing so," she explains. "From its very onset, the PFDC has provided me with a platform and I felt that, as a council member, I should ideally show every new collection with my own council. Only recently though, HSY, who is a founding member of the PFDC, showed at Karachi’s Fashion Pakistan Week and for me, it highlighted the opportunities available in the city. I intend to show very soon at a fashion week there."

To be fair, despite evading the fashion week circuit, Khadijah has in the past tried her best to expand business to Karachi. Last year, high on the success of her bridal  fashion week showcase Sultanate, a one-day Élan trunk show was held at Karachi’s multi-label boutique, Labels. Customers could walk in, observe the bridal samples expressly flown in from Lahore, meet Khadijah and place orders. A similar trunk show is in the pipeline now for the very quirky, latest Art Struck Élan.

"I also continue to stock at multi-labels although it can get difficult at times," reveals Khadijah. "At my own store, I can control the inventory, create monthly stock reports and calculate profits. Multi-labels, meanwhile, manage myriad different brands. It isn’t always possible for them to send in monthly records and profit reports for each and every brand. Stock reports and payments often come in a few months’ time."

"Multi-label stores are important because they enable me to reach out to a wider audience and luckily, I work with some of the most established stores in the country. Still, it’s far easier to interact with customers on a one-on-one basis. I definitely have plans for opening a studio in Karachi and Élan online launches soon."

The very popular Élan lawn, created in collaboration with Hussain Textiles, similarly seemed to fall victim to the Lahore-Karachi divide. An exhibition was held in Lahore for this year’s collection followed by distribution to major stores. The stock for Karachi was sent directly to a single retailer, Sanaulla, filtering down to other retailers later.

"There was definitely no Karachi-Lahore bias," asserts Khadijah. "There were a large number of billboards placed in both cities advertising Élan lawn. Distribution, this year, simply wasn’t in our hands. Last year, we handled the distribution of lawn only to realize that some major, well-known stores refuse to pay on time. Some, in fact, are yet to pay us for the 2013 prints! This time, we played it safe by pre-selling the majority of our stock to a distributor who then circulated it according to his own understanding. Only a very small amount was set aside for an exhibition we wanted to hold for our long-term clients in Lahore."

It was this limited amount, then, that ran out quickly much to the frustration of customers at the exhibit and lead to criticisms that false sold out declarations were being made just in order to create hype. "I never once claimed that we had sold-out and I can’t control what other people at the exhibit decide to say," says Khadijah. "Some of the prints certainly did run out of stock although they may still have been available at retail stores. I had customers messaging me on Facebook and Twitter, asking for prints that they couldn’t find; hate-mail from the smaller cities in the country, demanding why we hadn’t distributed enough stock to their regions. I couldn’t possibly have paid these people in order to get them to message me!"

"Designing lawn requires a certain aesthetic and fortunately, I do it well. I don’t need to create false hype for my lawn to sell well. It’s very popular all on its own."

The Élan of retail, or lack of it

Even as her business booms, Khadijah has her critics. Why, for instance, are the clothes she showcases at fashion week not usually available for retail? Élan’s retail offerings are often limited to pretty, buyer-friendly shalwar-kameezes rather than the edgy designs shown at fashion week. "Élan’s fashion week collections do get translated to retail but only in the form of wearable silhouettes. Avant-garde western-wear is great for creating catwalk drama but it wouldn’t make sense to stock it on retail racks in multiple sizes. Even our Élan Vital collection is a diffusion line inspired by the doodles and graffiti-art of our fashion week line, translated on to easy, wearable silhouettes."

"Pakistani women, in general, want to wear easy tunics and stitched three-piece suits. It’s a lesson I’ve learnt through experience. Does Galliano ever sell the clothes he showcases on the runway, as they are? Closer to home, don’t Khaadi’s cutting-edge designs get translated onto basic tunics for their stock in stores? Why would I want to stock clothes that most customers won’t buy? Off-the-rack designs are always going to be more retail-friendly while the fashion week designs begin to get recreated on order immediately from the day following the show!"

Has her familiarity with Lahore’s high-society helped in attracting in the right, heavy-pocketed clientele? "I don’t think so," she says. "Everybody I know has some relative or the other who is a designer. Clients may come to me initially because they know me personally but they come again only because they like my work. Knowing the right people may help in generating interest but sales can only be sustained through good work."

"I’ve built this label completely on my own, re-investing and expanding with my own profits. It’s taken hard work and retail acumen to make it move ahead."

Clearly, Khadijah’s penchant for design is balanced by a firm head for business; an all-important equation as the business of Pakistani fashion grows bigger, better and stronger. Élan Vital has her stepping out of her quite lucrative comfort zone into affordable prêt; a clever, intuitive move as the market for fashion leans increasingly more towards ready-to-wear. The line is also quite spectacular – the sales are sure to come rolling in. She’s already hugely popular in Lahore, her lawn is coveted all over the country and her expansion plans could very well make her a force to reckon with nationwide. Time will tell.