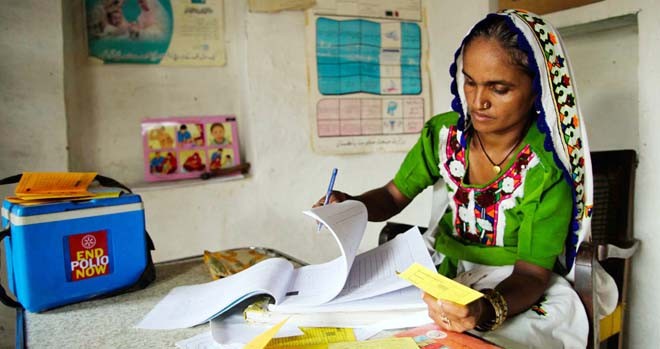 The government of Pakistan is mulling schemes to achieve the Millennium Development Goals which appears to be a distant dream. One of its targets under this plan is to reduce maternal mortality rate to 123 deaths per 100,000 live births, by 2015, which seems too difficult if conditions remain the same.

In true sense, the song "dhoop aur chaoon" was a depiction of the hardships faced by a mother in our society. This song was heart touching and a marvelous effort that the community put forward to show the gravity of the issue. It stressed on the fact that women from rural and suburbs of big cities as well are the worst victims of conservatism, traditionalism and negligence of medical staff and the lives of women and newborn are not considered as important as they ought to be.

Recently, there was a seminar on the concept of Community Midwives. Titled "Handling Motherhood with Care by Maternal." It was organised by Neonatal & Child Health Programme and Pakistan Nursing Council in collaboration with Technical Resource Facility (TRF) and Research & Advocacy Fund which dwelled on these issues at length.

Sindh Health Secretary Inamullah Khan Dharejo pointed out the performance of doctors with grief and said they are not efficient in rural areas and small cities. Same is the case with those doctors who perform very well in their personal clinics rather than public hospital which has made the situation worst for the poor people. Life of mother and newborn is important whether they are poor or rich. Dharejo questioned, "Why do they (doctors) prefer to work in Karachi and Hyderabad and not in other cities, such as Kandhkot and Jacobabad?" He emphasises on the fact that there is a dire need to bring about drastic changes at grass-root level.

In Pakistan, nearly 50 to 60 per cent deliveries are handled by traditional midwives. Around 16,000 young women die of pregnancy and childbirth-related complications every year in the country and most of these deaths occur due to excessive blood loss after childbirth. Maternal mortality ratio in Pakistan is 276 per 100,000 live births, which is the highest in South Asia, and after every 30 minutes a woman dies due to pregnancy.

In Pakistan, nearly 50 to 60 per cent deliveries are handled by traditional midwives. Around 16,000 young women die of pregnancy and childbirth-related complications every year.

The situation is worst in rural areas or suburbs of cities. Untrained midwives are unable to handle the cases putting the life of both mother and child at stake. Due to lack of education and conservatism in most parts of Pakistan, women are not allowed to go to a doctor and traditional midwives even deal with the critical cases.

Pakistan People’s Party MPA Syed Nasir Shah said community midwives are the backbone of Maternal & Child Health (MNCH). He assured that the provincial government will increase the monthly stipend of midwives from Rs2000 to Rs5000. He also highlighted the fact that there is only one midwife for 5000 women.

Dr Sahib Jan Badr, Director Programme MNCH Sindh, said that the country’s maternal mortality rate is the highest in the region where about 12,000 mothers die during childbirth each year. She stressesd that newborns fare no better and Pakistan has one of the highest neonatal death rate in the region -- an estimated 298,000 newborns dying annually. Babies who survive the crucial 40 days after birth often remain in poor health. Many die before their fifth birthday, as Pakistan’s under-5 mortality was 424,377 in 2010.

Addressing the need of fully-trained midwives, she says their 18-month training programme was launched in 2008 in Sindh province and 1417 women have been trained irrespective of the target of 1960. While responding to a question, she said the prime funding is from the provincial government and Department for International Development (DFID), a British organisation.

Midwives are an integral part of the healthcare delivery system. Dr Zahid Memon pointed out that the lack of awareness in the community about the availability and purpose of midwives is an issue. He stresses there is a dire need of trained and educated health workers and midwives in rural areas.

Midwife Samina Khoso from Sanghar underscored the need of health workers in remote areas. CMWs have to deal with the pregnant women and in most of the rural areas, midwives are the only hope for tens of thousands of women. Apart from the fact that the government is formulating schemes to overcome the issue and reduce maternal mortality rate to 123 deaths per 100,000 live births by 2015, there is little hope that the target will be achieved.

DG Health Sindh Ashfaq Memon informs that the ratio of mother and child mortality has decreased in last five years from 20 to 30 per cent in Sindh. He said the government is working on different healthcare schemes in the province to minimize the maternal and children deaths up to the age of 5.

The dilemma of Pakistan’s education sector is its over-emphasis on theoretical side instead of practical training because of lack of resources. While referring to the hurdles in achieving the goal, Dr Najma Lalji, a public health practitioner associated with TRF, says the biggest hurdle is inadequate education and training as a survey reveals that 54 per cent midwives conducted less than 10 deliveries during their training while 16 per cent midwives did not perform any delivery at hospital level.

There is no doubt that the community midwives play a vital role in this achievement in the province where women still do not have access to midwives. The international community should keep helping Pakistan to achieve MDGs which seems difficult but, for sure, not impossible to achieve.