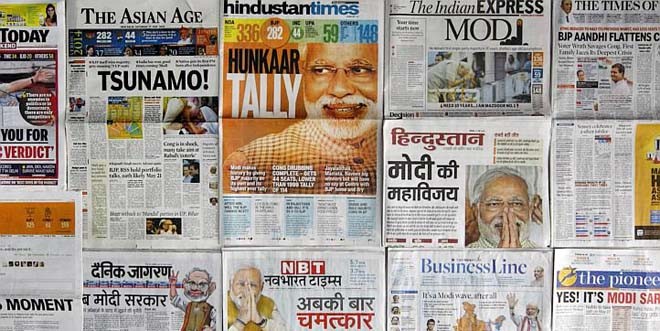 It has been observed that the "maximum campaign" the BJP’s Narendra Modi ran with minimum help from his party and the passionate commitment of a cadre of technocrats, made unprecedented use of the social media to get its word out. This is, at best, a partial truth since the use of the social media conformed to an older template of propaganda. None of the specific features of the social media, such as its interactivity and the potential richness of its user-generated content, were in evidence in Modi’s campaign. Modi’s record of achievement as chief minister of Gujarat was blazoned as a model that he could magically transpose to every corner of the country, bringing electricity, roads, ample water supply, and prosperity to every village.

It is a different matter though, that the better informed commentary found the Gujarat experience in economic growth to be little different under Modi than under several of his predecessors, and, in fact, to have been devoid of serious social welfare benefits. On most assessments of overall progress in growth and human development, Gujarat ranked in the middle-ranges among India’s states. Yet, this undistinguished record came to represent through the "maximum campaign" a model that the rest of the country could profitably emulate.

Quickness of reflex was one among the features of the Modi campaign, which involved a constantly changing itinerary of public engagements to keep the opposition off-balance. That aside, a striking aspect of the campaign was its immersive character, its ability to invite an angry and aggrieved electorate into a large tent where Modi would seemingly talk to them directly in an idiom that reflected their frustrated aspirations.

The Modi campaign’s statistics suggest nothing so much as a pursuit of power with methodical finesse and calculation. He addressed close to 500 rallies over seven months and another 900 through holographic three-dimensional projection. In the six weeks between the first and final rounds of polling, he addressed an estimated 196 rallies while travelling 300,000 kilometres. Vans with the full panoply of audio-visual equipment meanwhile were traversing remote corners of the country, taking out the message of better times to come. And an advertising blitz blanketed every conceivable form of media -- print, TV, radio, online and outdoor -- with his image and the assurance that he alone held the magic key to unlock the pathway to the good times for all.

Initial estimates put the advertising budget that the BJP would roll out for its election campaign at roughly Rs 600 crore (6 billion). As the maximum campaign unfolded though, it became abundantly clear that the initial estimate was way off the mark. By the time the last ballot was cast in the general election, the BJP was estimated to have spent, conservatively, about Rs 5000 crore (50 billion) on advertising, creating an aura of omnipresence around Modi. Factoring in the charter costs of the jaunty aircraft that Modi rode to his rallies across the country, the total cost of the campaign could well end up in the range of Rs 10,000 crore (100 billion) -- at current exchange rates, that would be twice the money estimated to have been spent in the reelection of US President Barack Obama in 2012.

Once the euphoria of the Modi victory has abated, his corporate backers are likely to call in the multiple IOUs he has incurred. Whether he can square these obligations with his promise to bring in better times for all remains to be seen.

In terms of electoral law, the BJP and its leader are in the clear. It is a peculiarity of Indian law that ceilings are imposed on campaign spending by individual candidates in his or her constituency, but there is no such legal restraint on the money that a political party can spend to advance its cause.

Questions though will be raised as they must be about the funding of the "maximum campaign". And it could well be found that notions about the general elections being determined in the stock market may be exaggerated, but not by much. In fact, there has been an unmistakable correspondence between successive upward notches in the stock market in recent times and Modi’s steps towards political pre-eminence.

The Bombay Stock Exchange’s Sensitive Share Price Index (Sensex) showed an upswing in April last year, which seemingly coincided with Modi’s grand coming out, when he broke out of his confinement within Gujarat as a person who still had much to answer for about the 2002 riots that gutted the state under his watch. There was one more upswing in July, soon after Modi was named head of the BJP central election board. And then came the September exuberance, when he was named the party’s prime ministerial candidate.

On May 12, when exit polls carried out by India’s multiplying news channels found a rare moment of convergence in predicting a Modi victory, the Sensex surged 400 points to a third successive high. Among the stellar performers in that bull run was the business group promoted by Gautam Adani, among Modi’s principal corporate backers, whose imprint was evident on all the aircraft rides that the Gujarat chief minister took to his rallies. Also gaining hugely was the Reliance group headed by India’s richest man, Mukesh Ambani.

In continuing exuberance, the Adani and Reliance group are believed to have added Rs 4000 to 5000 crore to their net worth just on May 13, three days before the ballots were due to be counted. Ambani alone is estimated to have added $ 5.3 billion (or roughly Rs 31,000 crore) to his fortune since Modi was named the BJP’s prime ministerial candidate last September. And Adani is believed to have more than tripled his personal net worth from $ 1.9 billion (roughly Rs 11,000 crore) in that period.

Once the euphoria of the Modi victory has abated, his corporate backers are likely to call in the multiple IOUs he has incurred. Whether the newly-anointed prime minister can square these obligations with his promise to bring in better times for all remains to be seen. It could well emerge that the Indian economic situation is much too complex to be addressed by the simple nostrums that Modi served up through the campaign blitz that left opponents in a state of shock and awe.