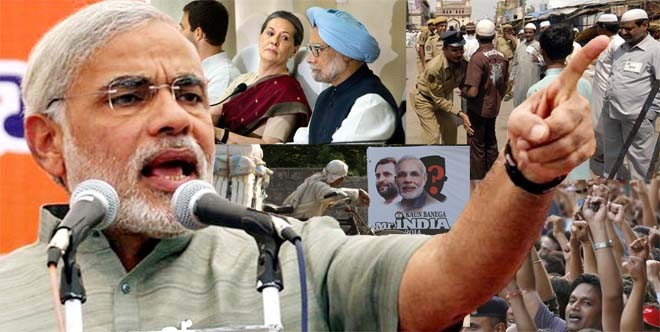 Amit Shah was the most sought-after Bhartiya Janata Party (BJP) leader, as his Hindu nationalist party created history by getting a majority to form the government on its own for the first time. The uninspiring bald, bearded, plump man was hailed as ‘the man of the match’ while he appeared on back-to-back television shows after playing a key role in the victory, delivering 70 out of 80 seats in the key Uttar Pradesh (UP) state.

The BJP’s performance in UP was particularly unprecedented. It had not got so many seats there even after the Babri Mosque demolition, which led to the killing of hundreds of Muslims and polarised Hindu voters in the party’s favour to catapult it to power in the 1990s. The BJP had been in disarray in the key state before Amit Shah, a key aide to Narendra Modi, was sent there last year.

Modi assigned his right-hand man the state to redeem himself a few years after he was jailed for masterminding extrajudicial killings of Muslims while he was a Gujarat minister as part of the witch hunt against the community, following the 2002 pogrom. He was even banned from entering his state. This was a desirable qualification to do the job in UP, where Muslims are numerically significant and have tactically voted to keep the BJP out of power. Fault lines there were waiting to be exploited.

Shah had the Gujarat template of consolidating the Hindu vote to such an extent as to make Muslims irrelevant. The bogey of Muslim ‘threat’ and ‘appeasement’ were effectively used as a strategy in UP at the grassroots level to replicate the formula. Shah followed the script and was consequently banned from electioneering in UP after delivering a hate speech against Muslims. He spoke of ‘revenge’ in Muzaffarnagar and taunted butchers (Muslims) for "overnight becoming millionaires from beggars" due to largesse of the pro-Muslim government.

Elsewhere in the state, he worked closely with the BJP’s parent organisation, the Rashtriya Swayamsevak Sangh (RSS), for a door-to-door campaign, asking ‘Hindus to vote as Hindus’ to teach ruling Samajwadi Party’s ‘Maulana’ Mulayam Singh a lesson for ‘favouring’ Muslims. The Modi aide called Muslim-dominated Azamgarh ‘a base of terrorists’ and had earlier asked voters to punish parties that had given Muslims tickets.

The BJP surge has resulted in the lowest ever Muslim representation in the parliament.

That no Muslim has been elected from UP for the first time is a measure of how BJP’s divisive campaign worked. Three newly elected BJP lawmakers from the state, who were publicly felicitated ahead of a Modi rally, are accused of inciting anti-Muslim riots in Muzaffarnagar last year in which around 60 people were killed, women violated and thousands displaced.

Modi nationally complemented the BJP’s traditional politics of demonising Muslims -- this time largely under the radar -- by focusing on the issues of ‘development’ to win over fence-sitters. His record in Gujarat was in contrast with the Congress’s incompetence and its dynasty, corruption and patronage-driven politics. But old habits die hard. He called Kerala -- with substantial Muslim population -- ‘a nursery of terrorism’, threatened ‘illegal’ Bengali Muslim ‘migrants’ with deportation and cornered the Congress for encouraging beef export to benefit Muslims.

His rhetoric preceded the massacre of Bengali Muslims, including women and children, in Assam. The slaughter was celebrated on social media as an advance celebration of ‘Modi Raj’. His choice of holy city of Varanasi as his constituency, too, underlined his Hindutva image.

Modi had been a darling of the exclusivists since the 2002 Gujarat pogrom for which he has never apologised nor has ever visited its survivors. He has since become a symbol of ‘Hindu pride’ and one commentator aptly described his victory as a result of a coalition between those who loved him for 2002 and others who did not care.

Modi was conscious of not diluting his hardline image. It was clear as he only mildly rebuked militant Hindu leader Pravin Togadia on Twitter. Togadia, who has long spewed venom against Muslims and called for disenfranchising them, directed his followers to spit at a Muslim businessman to force him out of a house he had bought in a Hindu area in Gujarat.

Togadia heads one of the stridently anti-Muslim organisations in the family of RSS, which for the first time in decades mobilised its volunteers to openly work for the BJP. It is, thus, unsurprising the BJP surge has resulted in the lowest ever Muslim representation in the parliament. There are just 20 lawmakers -- out of 543 -- from the community that accounts for around 15 per cent of the population. The BJP, unsurprisingly, has no Muslim representative in its 282-member parliamentary contingent.

There have been half-hearted statements assuring Muslims of their well-being. But the BJP/RSS’s track record does not inspire much hope. The 2002 pogrom came a decade after L K Advani led a violent campaign for the Babri demolition for the construction of a temple in its place. The campaign’s genocidal nature was reflected in slogans like ‘Musalman kay doh he sthan -- Pakistan ya Qabristan (there are only two places for Muslims -- graveyard or Pakistan)’.

There are just 20 lawmakers -- out of 543 -- from the Muslim community that accounts for around 15 per cent of the population. The BJP has no Muslim representative in its 282-member parliamentary contingent.

Attacks on Muslims with official complicity proceeded and followed the mosque demolition in presence of top BJP leaders in December 1992.

The violence started in BJP-ruled UP, where historian Ramchandra Guha notes: "Hindu mobs attacked Muslim localities, and -- in a manner reminiscent of the grisly partition massacres -- stopped trains to pull out and kill those who were recognisably Muslim. In some places, the victims retaliated, whereupon they were set upon by the Provincial Armed Constabulary, long notorious for its hostility towards the minority (Muslim) community.’’ He cites one commentator saying Advani’s march had, in effect, become ‘a raktyatra, a journey of blood’.

BJP leader, Arun Shourie, who is expected to get a key ministry in the Modi cabinet, gloated. He made it clear the Babri campaign’s real motive was to make India a Hindu Rashtra (majoritarian Hindu state) for which it did not have the required parliamentary strength till 2014. He said the events in Ayodhya demonstrated Hindus "have now realised that they are in very large numbers, that their sentiment is shared by those who man the apparatus of the state, and they can bend the state to their will’’.

The RSS is dedicated to Hindu Rashtra and prepares young recruits for a lifetime service for it. Like many BJP leaders, Modi started his political career as a volunteer in the RSS that has long demonised Muslims as ‘unreliable fifth column’ and a threat to the Hindu nation. M S Golwalkar, who headed the RSS in 1940s, saw Muslims along with Christians and Communists as ‘akin to the demons, or rakshashas, of the Indian mythology’.

He described Hindus as ‘avenging angels who would slay them’ to restore the ‘goodness and the purity of the Motherland’. He warned ‘foreign races (Muslims and Christians) in Hindustan’ to ‘adopt the Hindu culture and language’, learn to respect and hold in ‘reverence the Hindu religion’ and ‘entertain no ideas but those of glorification of the Hindu race and culture’.

Golwalkar made it clear they ‘may stay in the country wholly subordinated to the Hindu nation, claiming nothing, deserving no privileges, far less any preferential treatment -- not even citizen’s rights’. BJP leaders, like Modi, idolise their ideologues like Golwalkar and have never been so close to realising their dreams as they have the numbers now to show their true colours.