A sense of nirvana 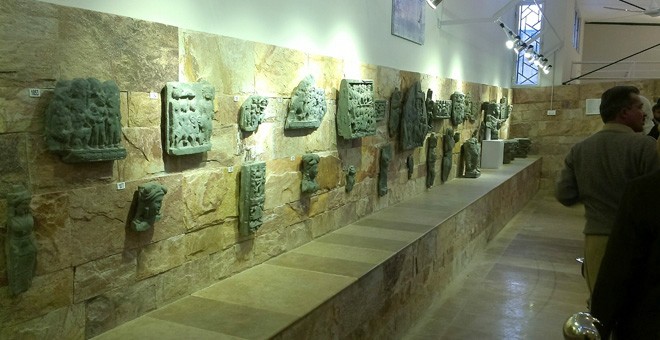 On a meandering road from Peshawar to Swat, the sights of lush green fields, women in colourful clothes tending the fields and the towering height of the boundary walls of houses, strike a visitor with their beauty, character and mystery. After crossing the Malakand pass, mountains gradually gain clear contours and the road grows narrower and winding, and one can hear the sound of water springs gushing out of rocks. From there on, the archaeological remains -- crumbling fort walls and stupas -- can be seen dotting the sloping hills.

In ancient Sanskrit sources, Swat was called ‘Uddiyana’, that is, a ‘garden’ where the Buddhist monks gathered for meditation and study in hundreds of monasteries, scattered across the hills and mountains of the valley. The rock cravings, stupas on hills and the statues of Buddha in the monasteries brought pilgrims from different parts of India, as well as the Far East, where Buddhism had spread via the Silk Route.

I have grown up reading in the history books that Peshawar, Swat and Taxila were the centres of Gandhara civilisation, but I became aware of the richness of the archaeological heritage of Peshawar and Swat on my recent visit to the Peshawar and Swat museums.

While animatedly explaining the life stories, Jataka tales -- stories about the previous lives of Buddha in both human and animal forms -- and miracles of Buddha, intricately chiselled on stone, the assistant curator of the Peshawar Museum said, to the astonishment of his listeners, that more than 2000 archaeological sites have been identified in KPK, and some of these belong to the Bronze Age.

The collection of Buddhist artefacts at the Peshawar museum, consisting of statutes, stone reliefs, rock carvings and stupas, is not only breathtaking in its range but also craftsmanship. The artistry of the sculptors -- who had carved the religious texts into stones and sculpted Buddha in bronze and stone in various postures and sizes, ranging from a starving Buddha with its hollow eyes to a smiling Buddha spreading its warmth from within to a Buddha attaining parinirvana, the final nirvana of Buddha at the time of death -- transfix the visitors, demanding a greater level of mental and spiritual concentration.

The collection of Buddhist artefacts at the Peshawar museum, consisting of statutes, stone reliefs, rock carvings and stupas, is not only breathtaking in its range but also craftsmanship.

When I asked the curator about the museum at Swat, the next stop on my itinerary, he said that the militants bombed the museum in 2008 but, fortunately, as the information about the bombing had been received in advance, so the employees of the museum packed more than 2,000 artefacts overnight, and sent them to the Taxila museum for safekeeping. At the same place, an earthquake-resistant museum, with new coding scheme and display cases, has been opened, with the technical help of the government of Italy.

After reaching Swat, I had to pull myself away from sightseeing around Mingora and Saidu Sharif, for the clear waters of Swat River, rolling down the hills, plum and apricot orchards, and wisps of mist, rising from the mountain peaks, cast a magical spell on the visitors. But I also wanted to see the artefacts, excavated from the archaeological sites, the female sky dancers of tantric Buddhism, once called the ‘paradise of Dakinis’ by Giuseppe Tucci, a legendary expert on Tibetan Buddhism.

In fact, no mention of excavations and preservation of archaeological sites in Swat would be complete without describing his contribution in the scientific excavations of the sites in 1950s. He had also aided in designing the Swat museum and in cataloguing the archaeological finds. To pay homage to his services, his car and tools have also been put on display in the museum.

After visiting the museums at Peshawar and Swat, it becomes clear that statues and relief displayed at both museums show a degree of similarity in craftsmanship and narrative detail. One, as the artists were drawn from Central Asia, Iran and Greece, so the iconography and sculpture depicts fusion of different artistic styles, although, clearly defined features and heavy cloaks, with bold folds, and concentric circles on the right side, are reminiscent of Greco-Roman art. Second, most of the statue heads are surrounded by halo disks, which represent the divine light or the true source of truth. Third, a typical Gandharan stupa, whose replicas are displayed in the museums, has a hemispherical dome, with a ring of canopies, stretching over it, and the dome and the canopies rest on a square podium.

Finally, the statues of Buddhas at the museums convey spiritual meaning through gestures and positions called mudras. For instance, some of the statues have been crafted in Abhaya mudra -- when palm of the right hand is open at a chest level, symbolising realisation of enlightenment.

To say the least, although the impeccable craftsmanship of the sculptors has artistic merit for the visitors, the iconography of Buddha had flourished on account of its religious value. The images were meant to show the devotees, the path of inner contemplation and reflection and, it was also believed, that proximity of the adherents of Buddha to his images, would aid them to realise their inherent potential for goodness and compassion.

Despite possessing treasure troves of artefacts, the inflow of the visitors to both the museums has declined over the years. According to the curators, it is less than 100,000 tourists annually.

One reason could be poor security environment, however, it is at best a flimsy excuse, as paltry efforts have been made by the government to promote the rich cultural heritage of the country for, presumably, it would challenge the national narrative which begins with the conquest of Muhammad bin Qasim and which celebrates the raids of Mahmud Ghaznavi. Thus, what came before them is simply forgotten or obliterated from the national memory.

A sense of nirvana