Of 5½ Men and other things 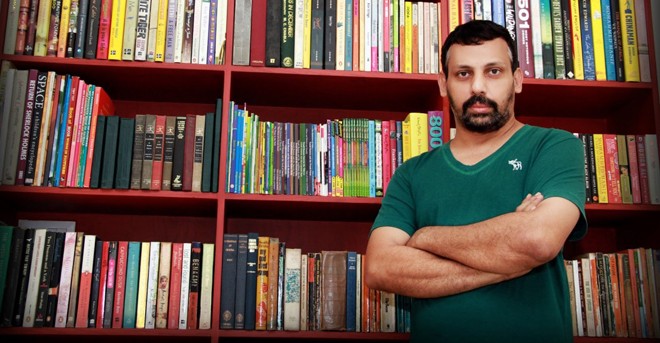 "The book is not about hope. It is about hopelessness. More than anything else, it is about distress and religious intolerance that can divide humanity and win elections," says Anees Salim, a college drop-out-turned-writer about his novel Vanity Bagh.

The novel is set in Mangobagh, a fictional town in India, and there is an obvious pun to the name: if translated in Urdu or Hindi, it means Aambagh, which could also imply ‘Commoners’ Garden’. The Mangobagh is divided along religious lines into Mehendi and Vanity Bagh: Hindus populate Mehendi while Vanity Bagh is largely a Muslim town, with a smattering of Parsis and Christians.

The plot of the novel revolves around the everyday eccentricities and adventures of a youth gang 5 ½ Men, whose members meet a tragic end, brought on by an absurd mix of vainglory, ignorance and ill-fated crisscrossing of events. Imran Jabbari, the narrator, while languishing in jail for taking part in a terrorist operation, begins to view his life story, in the empty books, which he binds and paints. Imran is  extremely alert and psychologically astute, and his narration, although darkly comic, is saturated with  compassion.

The narrator says: "In our mohalla it’s quite normal, you can even call it inevitable, to be named after someone rich and famous from Pakistan….It was Imran’s own fault that he joined politics and lost his wife and everything nice to more successful people."As Yahya is deaf and mute, so his disability reduces his status to a half man.

The name 5 ½ Men had been carved on Franklin, a tree, planted by a priest, who according to a local folklore, had circled around the sapling, chanting hymns from the bible. On learning about the Christian roots of the tree, the religiously devout Jinnah, decides to fell the tree, but ends up etching 5 ½ Men over its thick bark. The choice of the name foreshadows the doom of the group, as the name, carved in a fit of religious fervour, could only lead to tragic consequences.

Anees Salim weaves a complex narrative without relying on ideological constructs such as Marxism, Islamism and Capitalism.

The title Vanity Bagh can be interpreted in a number of ways. One, the inhabitants of Vanity Bagh are vain, as they stay cocooned within a small glass shell, where they contentedly view the repetitive reflection of their customs, practices, fears, insecurities and hopes.

In their insulated world, despite regular calls to prayer, visits to the Mosque, recitation of the Holy Book, celebration of religious festivals, the moral presence of God is eclipsed by the threatening figure of Abu Hathim, a gangster, who dominates their moral universe, and tilts its balance towards the pursuit of narrow earthly goals, often sanctified under the cloak of religious values.

The word ‘vanity’ could also imply a form of self-likening of the 5 ½ Men to Abu Hathim, who has gone partially blind and limps with a crutch, but wields tremendous influence in the town, with his money, guards and past reputation.

And, finally, vanity could also mean the meaninglessness of earthly life, where liberation from the absurdity of life, is only possible through death. In the end, after the death of Zia, Imran Jabbari discovers that there is no escape from jail, and only death can bring freedom, but death is also annihilator of all earthly pursuits. The theme of futility of life, resulting from transience of life and the certainty of death, has been constantly echoed in the Holy Scriptures, arts and literature.

The biblical verse "Vanitas vanitatum omnia vanitas" translated as ‘vanity of vanities, all is vanity’ makes statement about the futility of life. Similarly, in Bunyan’s The Pilgrim’s Progress, the ‘Christian’ passes through the town of vanity, where ages-old vanity fair is held, and different sorts of temptations and allurements, devoid of lasting value and meaning, are sold; however, the Christian could only achieve salvation, not by running away from the Vanity Fair, but by insulating himself from its temptations.

Apart from the theme of vanity, the novelist discusses the political dimension of the religious conflict, with Pakistan, at the centre of the conflict. The celebrations in the Vanity Bagh, on the occasion of Pakistan’s win in the 1992 World Cup, leads to riots between the Muslims of Vanity Bagh and the Hindus of Mehendi. This religious strain has contemporary resonance -- in the past few weeks, Kashmiri students have been expelled from the Meerut University for celebrating cricket win of Pakistan and the 2014 election campaign in India has also been ghastly communalised, resulting into deadly riots.

Anees Salim weaves a complex narrative without relying on ideological constructs such as Marxism, Islamism and Capitalism. He succeeds in articulating the suffering, loneliness and hopelessness of the people of Vanity Bagh through humour. In fact, humour serves two major purposes: it doesn’t make him judgmental and he manages to say irreverent things without lapsing into any kind of sentimentality.

The novelist has drawn his characters with unfailing sensitivity and empathy. Despite his many failings, Imran Jabbari is a compassionate soul -- when his sickly brother comes to see him in the jail, he does not carry out his plan of jailbreak, out of the fear, that his brother might also be implicated in the plot. Imran’s father is emotionally unreachable, not just to his children, but also to himself, but his sudden outburst of emotions, on his only jail visit, while mentioning the sudden death of his wife, brings out his human side.

The ending of the novel shows possible repetition of history; Imran Jabbari sees his brother walking along with his nephew, Bilawal, again named after a Pakistani politician, in the street of Vanity Bagh; and the readers are left with a feeling that, in the absence of a true moral vision, which is not overshadowed by Abu Hathim and his sons, people of Vanity Bagh are condemned to live a vain, purposeless and absurd life.

Of 5½ Men and other things