Salt your way to a better life! 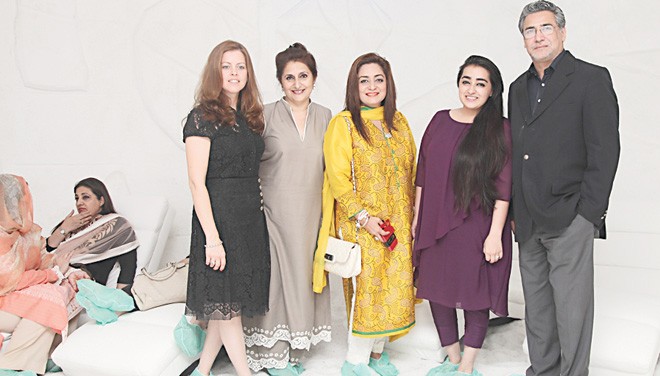 Salt cave therapy traces its origins back to 19th century Poland, where a physician noted that salt miners rarely suffered from respiratory diseases and had better immune systems than average citizens. The salt saturated air served as a natural antiseptic agent that cleansed the body inside out, leading to better health. The newly opened Salt Cave Spa in Lahore aims to capitalize on these healing properties. The spa, an artificial cave built with FDA-approved rock salt that carpets the floor as well, uses halogenerators to process the salt into micrometer-sized ionized particles and releases them into the air. These micro particles are the key to this therapy as they travel deep into the lungs to the level of the alveoli and fight bacteria that is linked to several ailments like allergies, asthma, sinusitis and even acne. We speak to Krisztina Alam, General Manager of the Salt Cave Spa Dubai as she travels to Lahore to inaugurate the first Pakistani franchise.

Instep: How did you become aware of salt therapy and what prompted you to start this spa?

Krisztina Alam: Salt therapy is not a new concept. It’s well known throughout Europe for decades now, if not centuries. In the last 10 years or so though, this therapy is beginning to achieve global recognition, spreading to all corners of the world. We saw that there was a niche market as it hadn’t been introduced to the Middle East or the sub-continent before and decided to bring it here. It has immense health benefits for all ages, from children to adults and the elderly and is a completely organic treatment, as we only use natural salt. The salt travels deep into your system, in fact, it is absorbed into the blood stream, to cleanse and strengthen the body from within. Salt therapy helps with a wide range of ailments, from respiratory diseases to anaemia and even eczema and acne, without the use of any chemicals or invasive treatment.

Instep: How long does a session usually last and how often would you recommend someone to schedule a session for optimum results?

Krisztina: A session lasts 45 minutes, but this three-quarter of an hour has benefits that equal to nine days spent in a salt mine or four days on a beach. We recommend six sessions, during six consecutive days, four times a year or more, depending on the person and severity of the ailment. With six consecutive sessions, we find that the therapy produces the best results that last up to four to six months.

Instep: How does the therapy work exactly?

Krisztina: The process is fairly simply. The halogenerators inside the salt cave crush imported Austrian rock salt, which contains 84 natural minerals, into micro particles. These particles are then released into the air and are absorbed by the body. The six sessions also recommended because with each progressive session, the intensity of the treatment is increased. The generators are first run at Level 3, then 5 and finally Level 7, which provides maximum salt density.

Instep: Can people with high blood pressure benefit from this therapy? Can pregnant women also partake in the therapy?

Krisztina: Yes, it suits people with blood pressure problems as well. Because it is completely natural, the therapy can help people get into a healthy blood pressure routine. It can aid in lowering the blood pressure, but not after one session only. To get into a healthy blood pressure routine, a person must come for six consecutive session at least before they begin to notice the difference. As for pregnant women, it’s a totally safe therapy till six months of their term. Even after six months, it is safe but it’s better to be precautious and return only after the delivery.

Instep: What are some of the benefits of the therapy that you’ve personally noticed?

Krisztina: So my favourite benefit of the therapy is that my skin looks and feels so much better. It has a natural glow, not only because I breathe better and it’s more oxygenated, but also because the salt particles work as gentle exfoliator and antibacterial agent. It helps counter the effects of dust and pollution, not only for my skin, but my body overall. I’ve noticed I also sleep better, especially the days following my sessions. It’s improved my immune system overall, I fall ill rarely and am definitely less susceptible to viral diseases such the cold and flu.

(Instep recommends that you consult your physician before starting any new form of therapy. – Ed)

Salt your way to a better life!