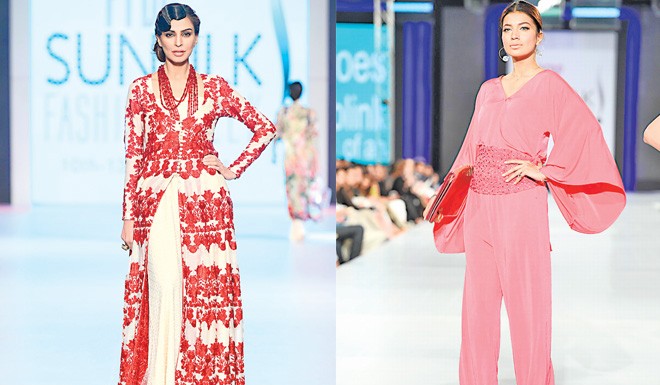 If fashion’s a growing, glorious behemoth then models are the emulation of it; the svelte sirens that figuratively steer it, the essential cogwheels who stalk to perfection in all that gorgeous designer-wear. Trends may be set by designers but it is fashion models who carry off those clothes, transforming them into wearable statements for millions of aficionados.

While the fledgling Pakistani fashion industry may be fairly flexible when it comes to modeling standards, the bar is definitely being raised as things get more professional and the business of fashion becomes more lucrative. Gone are the days when Tanvir Jamshed would offer modeling assignments to everyday stylish women, for his brand Teejays, and lo and behold, they’d be on the covers of the few limited glossies we had back then. Yes, unlike the rest of the world, we continue to have a persevering group of ‘models’ that border on the frumpy, overweight and overage. But thankfully, their number is getting smaller day by day.

As fashion weeks become more streamlined and fashion coverage in print and electronic media snowballs, the preening, pouting faces that launch a thousand local brands are getting younger, prettier and certainly more refreshing. They’re also taller, towering at an average 5’8". From the swinging ’80′s, back when the first few top models – Bibi, Aliya Zaidi, Tanya Shafi, Seemi Pasha and Lulu – emulated glamour, the Pakistani modeling industry has fumbled through murky waters, weighed down by changing political ideologies, until finally transcending to the present day with fashion, modeling and everything that glitters on the rise.

There are highs and lows to the present-day modeling spectrum. One remembers a time when fashion shoots would be off-the-wall, vivacious works of art. Fashion encapsulated in a comic-book format, a real-life disco scene created especially for a shoot and a devil-may-care Aaminah Haq being photographed in an underwater campaign. We may have a greater number of fashion shoots – and they’re certainly minting much more money than they were back in the early days – but with Photoshop going rampant, models are fast losing character, looking like glossy, cookie cutter plastic dolls. On the upside, there haven’t ever been as many new aspiring models entering the industry as there are now.

"The spectrum of models in Pakistan is so varied," observes veteran photographer Tapu Javeri, a master in wacky experimentation who has witnessed the metamorphosis of Pakistani fashion through his prolific camera. "There is Nadia Hussain who is far older than her counterparts but continues to walk the runway. She represents the last vestige of the country’s first supermodels. There is an array of models that only dabble in the profession occasionally, prioritizing careers in television and film. And then there are models that are fabulous on the runway but barely visible in fashion shoots and vice versa."

The best models, obviously, are those that are dynamic, wielding catwalk magic just as easily as they create drama in print. They’re a select few: young, spirited, with their weights healthily under control and their personal grooming in checks and balance. Grooming is a beauty basic that an unbelievable majority of models tend to overlook. The top models also have the intelligence to refrain from going overboard with cosmetic procedures – for it can be very difficult for a model to have impact when her looks change dramatically every year!

Here’s Instep’s line-up of five soaring names of 2014, girls who put the term ‘super’ back in the model. These women, quite literally, are helping fashion blaze ahead, all on the strength of their lithe, high-heeled feet!

Tall, dark and utterly sultry, Amna Ilyas brings on the razzmatazz like no other. Here’s one girl who comes with all the makings of a supermodel. At 5’8", she’s a veritable sylph on the catwalk and in fashion shoots her dusky complexion oozes glamour amongst a milieu of typically fair-skinned models. She walks the walk, talks the talk and has just launched into a fledgling acting career.

With rave reviews for her debut performance in last year’s Zinda Bhaag, a TV drama currently on air and a recent award for ‘Best Actress in Film’ under her very petite belt, Amna has added ‘movie star’ to her credentials. She’s also just about to become an extremely familiar face as one of the judges of this year’s Veet Miss Super Model contest. This celebrity aura, particularly earned through an acting career in film and TV, is quite coveted on local shores. It may not be the next step for models internationally but in Pakistan, it’s become the inevitable transition.

Amna Ilyas has worked with everybody and anybody, from Shehla Chatoor’s glamorous shoots to the easy breezy aesthetics of Daaman. And whether she’s dressed to the nines on the red carpet, gliding down the catwalk, posing for the camera or even dancing live on-stage, she never fails to nail the right attitude!

The statuesque Fauzia Aman is gorgeous, whether she’s sitting pretty in a lawn spread, grooving alongside Strings in a soft-drink commercial or fluttering outlandish net eyelashes at fashion week. With her modeling career spanning nearly a decade, one of Fauzia’s very first projects was with stylist Nabila, the woman with the veritable Midas touch when it comes to picking out talent and masterminding makeovers.

Nearly ten years down the line, Fauzia’s a powerhouse, having made elegant sophistication her forte. While her classic looks don’t really work well with coquettish frivolity, Fauzia makes up for it by enacting the perfect regal bride, the stunning Eastern belle or the siren, walking ramrod straight in elaborate luxury-pret. With her experience of working with myriad different brands, stylists and photographers, Fauzia’s repertoire of work is dazzling.

Half German-half Pakistani, Cybil Chowdhry is a delicious mix of Anglicized glamour and desi prettiness. 15 years into her career as a model, Cybil retains her dewy young looks, modeling Khaadi lawn, resplendent in bridal finery or – our personal favourite – posing for Muse in that short, uber-cool haircut she got a few months ago. She’s one model that has neither aged nor changed in a time when youth is only retained through cosmetic surgery. Cybil looks as naturally gorgeous as she did when she started out.

Discovered and launched in Lahore by Ather Shahzad, Cybil remains loyal to them in print and while this choice may have limited her versatility as a fashion model (as Ather and Shahzad adhere to conventional prettiness over experimentation with style) we see her as one of the many ‘Ather Shahzad girls’ that have made this choice. Fortunately she has stepped onto and ruled all major runways as well as campaigns. She is now judging the annual Veet Miss Super Model contest too.

The lissome, smoky-eyed Rabia Butt has a certain je ne sais quoi that affirms her as a frontrunner. Traversing both print and catwalk, Rabia’s work is consistently good – from the ornate luxury of HSY, the theatrics of Ali Xeeshan, the odd mobile phone television commercial to a gelled-hair, mustachioed avatar for Munib Nawaz’s menswear! Lawn billboards, a major money-earner for models, currently have Rabia modeling Khaadi lawn in bright technicolour across the country. Add in an upcoming movie debut, Hijrat is scheduled for this November, and Rabia’s on her way to fulfilling that all-important celebrity quotient.

If Rabia ever goes amiss it’s because she’s prone to taking short sabbaticals from work. "I am religious and so I am quite picky about what projects I decide to do. Eventually, I want to leave modeling altogether," she reveals. For now, though, she easily stands out as one of the country’s top models. Until she decides otherwise, Rabia Butt is certainly going places.

A Khawar Riaz discovery, Nooray’s willowy, contemporary looks have made her a popular choice for modeling avant-garde fusion-wear. We remember her most vividly as a frequent muse for Fahad Hussayn – a waxed, dusky effigy for the Kaala Paani collection or coiffured and powdered for Aristoanarchy. She wields drama just as easily as she is able to pose prettily in a sublime bridal, walk the runway for an exuberant Nomi Ansari finale or become the lawn-lovin’ modern Pakistani girl.

Slightly shorter than some of her contemporaries, at 5’7" Nooray still looks great on the catwalk. Print, though, is where she truly stands out. Nooray’s one fault, perhaps, is that she works primarily with stylist Khawar Riaz. Some of her best, most avant-garde work has been with the ace stylist and yet, in the age where billboards and commercials rule supreme, Nooray is restricting herself when she could be working with all the best stylists and brands in the country.

There are many other models that could have made it to our list except for a few glaring shortcomings. Seasoned model Mehreen Syed is visibly missing from fashion shoots and shows this year, her role as a new mother keeping her busy for now. Another veteran is Ayaan, who has worked hard to become a familiar face, consistently featuring in major ad campaigns and television commercials. However, while she is indubitably beautiful, Ayaan’s work is far more effective in print than on the catwalk, where her fluctuating weight is very apparent.

Nadia Ali is fabulous on the catwalk but her work in print is hardly memorable. Fayezah Ansari’s made a welcome comeback to the catwalk but it remains to be seen whether she will be able to rise back to the top with her effortless bohemia. She may have an LSA to her credit but in this business, you’re only as good as your last project and Fayezah needs to make waves in order to get noticed once again.

Height, weight and a consistent, diverse portfolio – as competition increases, these are the bare minimums that models need to fulfill. Unless, of course, you’re a feisty, individualistic firebrand called Aaminah Haq – but that’s a benchmark that models can only aspire to. It’s what makes fashion sizzle and crackle, beyond the artificial means of Photoshop, cosmetic surgery and styling. Models, designers, photographers – take note. 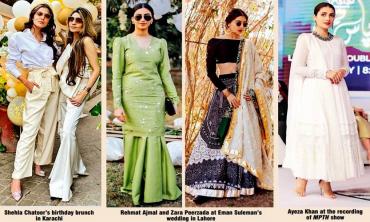 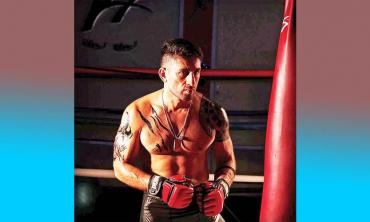 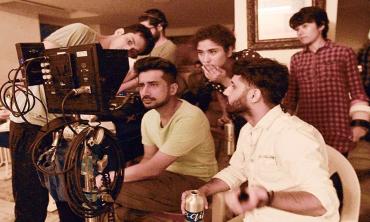