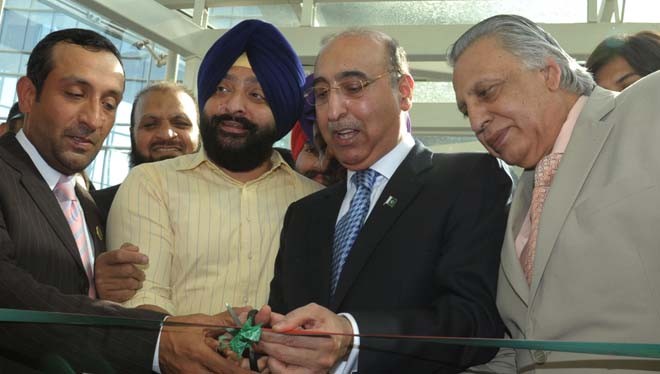 Trade is expected to be big part of India’s foreign policy when the new government comes in this summer. More importantly, States will be closely engaged in the strategy, which would also allow them to speak with their counterparts in neighbouring countries to enhance trade. Let us review the current situation of trade with neighbours. Only 137 items are allowed to be traded via the Attari-Wagah post bordering India and Pakistan. ‘Ridiculously small’ is an under-statement because there are more than 10,000 items, which are legally traded across the globe.

This lack of cross-border trade between the two nations who fought four wars since their independence is as much due to absence of political will on both sides and as a result of poor trade-related infrastructure. Fortunately, the necessary infrastructure has now been developed due to an enlightened policy on both sides. This policy will be revisited after the Indian elections in May to allow cross-border trade in almost all commodities.

People of both sides of Punjab are happy as they expect large benefits to their local economy. Simple trade facilitation measures can add to growth and the resultant peace dividend. With the establishment of an integrated check post at this border crossing and even with a low, artificially created base, over the last two years cross-border trade has grown manifold.

The perceived and actual benefits from reduction in costs of ensuring trade flows only confirms the hubris when the WTO members signed a landmark deal on trade facilitation in December last year at Bali. They agreed to simplify trade procedures at border points and develop new infrastructure to reduce the costs of doing trade. The positive multiplier effects are expected to benefit the global economy in a big way - much more than the stimuli provided by many countries since the outbreak of the Transatlantic financial crisis last decade.

However, skeptics are back at work in raising concerns about ‘unbearable’ burden of costs of trade facilitation reforms that may fall upon the poor countries. Does it cost anything to harmonise lunch hours? It took years to harmonise that practice on the India-Nepal border. True that costs are to be incurred to implement many new measures but what seems to be overlooked is the huge gains which small enterprises and consumers in poor countries will benefit out of such reforms that would dwarf their implementation cost.

Trade economists working closely on intra-regional trade in South Asia have cited procedural barriers as one of the major hurdles to cross-border trade. Even a minimal set of trade facilitation measures can reduce the costs of doing trade.

It is a no-brainer to say that the majority of the goods transported through land routes are products of small enterprises. They work on small profit margins. Even a small decrease in transportation and procedural costs would make their products more competitive, increase their profits and create more jobs.

India shares land border with Pakistan, Nepal, Bangladesh, Bhutan and Myanmar. Some of them including the relatively poorer, tribal-dominated states in the North Eastern part of India are land-locked but have huge potential for greater engagement in cross-border trade, especially in products of small enterprises which are mostly consumed by low-end consumers in neighbouring countries. Effective trade facilitation measures can nullify the curse of land-lockedness.

Due to lack of simple trade facilitation measures in poor countries, such as inadequate warehousing facilities and poor roads, their products face inordinate delays at almost all the border crossing points. Other than wastage of perishable products, it makes them uncompetitive at their destination. For example, at the Petrapole-Benapole Land Customs Station on India-Bangladesh border a large number of trucks are forced to wait at the municipal parking facility due to lack of parking space provided by the Central Warehousing Corporation of India. On an average, a truck has to spend about 5 days at this point before crossing the border.

According to the World Bank, in some cases, such trade costs amount to about 10 per cent of the value of the goods traded. Consumers are not only paying more but at times they are forced to choose from inferior substitutes. Particularly in those cases where trade is restricted to small number of products and volume, like between India and Pakistan, the cost of imported products becomes very high. This is one of the major reasons for high incidence of informal trade between India and Pakistan.

Trade economists working closely on intra-regional trade in South Asia have cited procedural barriers as one of the major hurdles to cross-border trade even when tariffs have been liberalised. Even a minimal set of trade facilitation measures such as harmonisation of working hours can reduce the costs of doing trade. Looking at the trade corridors among these countries, one feels that lack of trade facilitation measures like bad roads, insufficient warehousing facilities, lack of harmonisation of standards and regulations contribute to as high as 30 to 40 per cent of the cost of traded goods - much more than the World Bank’s estimation.

This is the ground reality in all poor regions of the world. High number of small enterprises and consumers with low purchasing power coupled with lack of trade facilitation measures linking producers and consumers is a common phenomenon. According to the International Trade Centre, the average cost of moving a container across the border of a poor country compared to the rich ones is higher by 43 per cent, thereby putting considerable burden on market linkages, producer and consumer welfare and their impact on reduction in poverty.

Keeping in mind that trade facilitation will have a greater positive impact on small enterprises and poor consumers, the governments of the poor countries need to fast track such measures and make them participatory by engaging producers as well as consumers with their design and implementation so that local peoples can quickly realise their benefits.

They have to be helped with committed support by the rich countries, emerging economies and multilateral banks. Hopefully, the WTO Agreement on Trade Facilitation will create the necessary political will to implement trade facilitation reforms and time-bound commitments of monetary and technical support to them.

Joseph George of CUTS International contributed to the article.