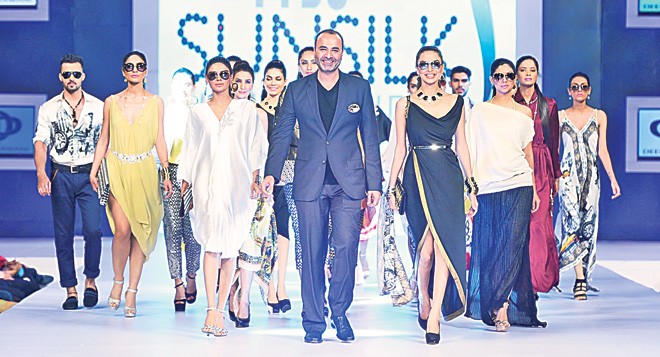 Life is a rollercoaster ride, especially if you’re Deepak Perwani. In his two decade long career, the designer has dipped and dived from one fashion week to the other, ricocheted through eponymous standalone stores and shot into the spotlight with funky music videos and TV drama roles. You could say that he’s done it all, his is a very ‘been there done that’ approach to everything.

"It’s been a phenomenal journey for me," says Deepak. "Everybody wants to be in my shoes but I would never want to be in anyone else’s."

His well-traveled shoes have, of course, traipsed catwalks in Milan, Paris and London. He’s spoken at the Royal Albert Hall in London, mulled over fashion and politics in Cambridge and created Guinness Book history by creating the world’s largest kurta for Ariel.

"For 20 years, experimental and edgy clothing has been my forte," observes Deepak. "One would assume that such clothes did not have a market in Pakistan but I have always had a steady clientele. The Deepak Perwani man has never been afraid of standing out. And the Deepak Perwani woman has indubitably been a modern, stylish bombshell."

Only recently, Deepak bowled Lahore over with his Tres Chic collection at the PFDC Sunsilk Fashion Week. In a country where fashion’s main clientele comprises of the begums sitting in the fashion week front rows, showcasing in a particular city generally tends to improve business there. Deepak cashed in on the hype by promptly stocking his latest collection exactly twelve hours after he showed it.

Of course, a designer has to be fairly confident of his brand to replicate his fashion week collection even before it is aired out on the catwalk and reviewed. 20 years down the line, Deepak feels that he understands his market.

"Most of the clothes were sold out within a few days," he says. "When I was part of Milan Fashion Week in 2010, Mario Boselli, who primarily organizes the event, told me something that I haven’t forgotten. He advised me to stick to my design philosophy: to create eye-catching, stylish statement clothes that were simultaneously cost-effective and completely wearable."

"To this date, the clothes I design don’t need to be ‘translated’ into wearable silhouettes post fashion week. My Tres Chic collection was well-cut, well-finished and extremely easy-to-wear. Yes, we’ve created kurtas out of the prints for our more conservative clients but the clothes are selling well, even in their catwalk versions. I had shown at a fashion week in Lahore for the first time and the response was incredible."

Hitherto, his position as Creative Director to the Karachi-based Fashion Pakistan council (FPC) had kept him away from Lahore’s catwalks. With relations being somewhat strained between FPC and the Lahore-based Pakistan Fashion Design Council (PFDC), it had only made sense to stick by his own council. Now that he is no longer spearheading the FPC and with both councils on somewhat friendly terms, Lahore made absolute business sense.

"My work with the FPC took up a lot of time and it was often not possible to create extensive collections. I could only come up with one collection and naturally, I would opt to showcase it with my own council."

With more time on his hands, this year Deepak managed to show with both councils: Tres Chic at Karachi’s Fashion Pakistan Week (FPW) followed a few weeks later by an extension of the same at PSFW. And while the line-up in itself was stunning – featuring chic kerchief dresses, flirty off-shoulder tunics, cigarette pants and a quirky array of handbags – Deepak did get slammed by some critics for showing the same collection successively in two closely-spaced fashion weeks.

"Criticism doesn’t bother me," he professes. "My focus is on sales and Tres Chic has been selling very well through my flagship stores as well as my newly launched e-store. These clothes define my vision for 2014′s Spring/Summer and I can’t be expected to come up with two disparate philosophies for two fashion weeks. The clothes are wearable and viable and while critics may have their own views, I wonder why they haven’t disparaged designers who showcased thick jackets or absolute wedding-wear at a pret-based fashion week for Spring/Summer?"

"People have loved both my fashion week showcases and it’s simply because they can see it fitting well into the season. They also admire my attention to detail – I belong to the non-Photoshop era where every single hair and thread has to be in place before a model is allowed in front of the camera or onto the catwalk. I welcome critique but I can only take it seriously when it is balanced and fair."

Deepak’s career has been sparkling: one LSA for ‘Best Luxury-pret’ and a whopping five more for ‘Best Menswear’. There have been standout collections like the Amrita Shergill, Frida Kahlo, Flights of Fantasy (Milan) and this year’s Tres Chic.

"Even with the lawn prints that I’ve been designing for four years – first with Orient Textiles and this year with Zeniya – my prints have always sold well. And this is even though I’ve refrained from going down the tired, over-embellished route. I’ve never created unremarkable clothes and that, I feel, is my greatest achievement."

"I’ve always worked hard and played harder," he continues with a laugh. It is a rock star’s life that he believes he leads. And TV dramas, at least, have him fitted into archetypal roles – for acting is Deepak’s ‘other passion’. He’s quite successfully played the jilted lover, the righteous hero or, more recently, the temperamental father with interesting grey shades to his character.

"This is the last time I play a paternal role," he says, of a drama that he is currently shooting. "I enjoy acting but unless something different comes up I want to take a break from it."

In the meantime, he’s considering writing – he’s not sure what but a reveal-all autobiography would be spectacular! He’s also about to create a prêt line-up in collaboration with a major design house that-cannot-be-named at the moment. And this year, at BCW and in the Autumn/Winter contingent of FPW, he’s planning to bring his erstwhile men’s wear back in focus.

"I am 32 flavors and then some," he quips, quoting the Ani DiFranco song. The rock n’ roll, the fun, the glamour and the great fashion continues!