Till they make up their mind 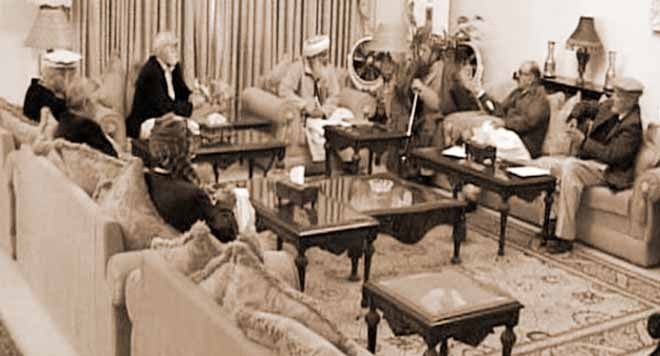 Just when it looked that the ongoing peace talks between the government and the Tehreek-e-Taliban Pakistan (TTP) were deadlocked, Interior Minister Chaudhry Nisar Ali Khan made one more effort on April 23 to revive the process by inviting members of the two negotiations-cum-facilitators committees to Islamabad for the much-awaited joint meeting.

The few details of the meeting made public didn’t reveal any breakthrough in the peace process. However, the four government negotiators and the three Taliban facilitators agreed that the peace talks should continue even after the TTP refusal to further extend the ceasefire that ended on April 10. The Taliban-nominated team led by the JUI-S head Maulana Samiul Haq and including his aide Maulana Yousaf Shah and Jamaat-e-Islami’s Professor Mohammad Ibrahim Khan was tasked to contact the TTP central shura to fix the next face-to-face meeting somewhere in the Federally Administered Tribal Areas (Fata) once an agreement on the venue and agenda is reached.

The last such meeting was held on March 26 in the TTP-controlled Bilandkhel tribal area in Orakzai Agency. This was the first direct contact between the TTP shura members and government negotiators -- who included a Pakistan Army officer -- during the current process of peace talks. In fact, it was after several years that such an interaction between the two sides took place across the table instead of the battlefield.

Arranging the meeting was no doubt a breakthrough, but it didn’t achieve much in terms of its outcome. The Taliban proved to be good hosts, but refused to concede ground on any issue. The government, on its part, also declined to accept the two TTP demands for releasing its 765 ‘non-combatant’ prisoners and pulling out Pakistan Army troops from the Ladha and Makeen areas in South Waziristan so that it could be declared a ‘peace zone’ where the Taliban could move freely and also use it for the ongoing peace talks.

A host of factors delayed holding the next round of direct talks. The lack of a breakthrough in the first meeting had dampened the spirit of both sides and the enthusiasm displayed on the eve of the previous encounter was missing. The internecine fighting between Taliban factions belonging to the Mehsud tribe in South Waziristan forced the TTP shura to devote its energies to mediate a ceasefire in its own ranks. The four-day fighting in which an unspecified number of Taliban fighters were killed had also something to do with the peace talks as the TTP factions differed on talking unconditionally to the government and unilaterally declaring ceasefire. To pre-empt further divisions in its ranks and put pressure on the government to accept its demands, the TTP subsequently decided not to extend the 40-day ceasefire beyond April 10.

The fresh clash between the TTP factions showed that the dispute between them fuelled largely by leadership tussle is far from unresolved and would continue to flare up.

The government’s attention too was distracted by the critical issue of former military dictator General Pervez Musharraf’s trial on treason charges for abrogating the constitution. It created a wedge between the government of Prime Minister Nawaz Sharif, which was keen to put Musharraf on trial, and the powerful military that didn’t want its retired commander-in-chief to be humiliated in the courts or punished.

The civil-military divide was further accentuated when prominent journalist Hamid Mir was seriously injured in an attempt on his life in Karachi on April 19 and the military felt the government failed to defend the Inter-Services Intelligence (ISI) against allegations made by Mir’s family and some journalists and analysts on the Geo TV channel about its involvement in the attack.

It now depends on the TTP to respond positively to the government’s offer of the second round of face-to-face talks possibly in the coming week. The government would like the TTP shura members to come to a government-controlled area for the talks because the first meeting was held in Taliban-held territory. If this were to materialise, it would be kind of a confidence-building measure as travelling to the place held by the rival side would certainly raise the trust level.

However, overcoming the logistics and security challenges for organising the meeting isn’t the main worry of the government. It is concerned more about reassuring the TTP that its demands would be automatically met once a peace accord is clinched because it is hoping, albeit wishfully, that by then all of Fata would become a peace zone and every prisoner would be freed.

The TTP refused to extend the ceasefire as it complained that not a single ‘non-combatant’ prisoner listed by it was released by the government and no step was taken to create the ‘peace zone’ in Fata. It disowned the 19 Mehsud tribesmen freed by the government in South Waziristan by arguing that the TTP had not demanded their release. It is likely that the TTP would link extension in ceasefire to progress on its two-point demand. Such a move would be unacceptable to the government.

The three-month old peace talks have been dogged by controversy and roadblocks. The government had to disband its first four-member committee, in which three members were private individuals, and nominate a new one. This time three serving and one retired bureaucrat were included in the committee, drawing criticism from the opposition that this amounted to no-trust in politicians, including those from the ruling party.

Retired Inter-Services Intelligence (ISI) official Major (retd) Aamir, who was in the first government negotiations committee and was invited to assist the new committee without becoming its formal member, recently quit the peace process after complaining that some of the negotiators were using it to gain political mileage. He obviously was referring to the three Taliban-nominated members, particularly Prof. Ibrahim, who on a daily basis have been giving media interviews and sometimes issuing controversial statements that could harm the already faltering peace process.

The renewed clashes between rival TTP factions hailing from the Mehsud tribe in South Waziristan also created hurdles in holding meaningful talks. On April 30, five militants including Commander Amir Hamza were reportedly killed in a clash reportedly involving the fighters affiliated to the Khan Said Sajna and the Shahryar Mehsud groups. The clash took place despite claims by the TTP that a ceasefire had been mediated and the dispute resolved through the efforts of its shura.

The TTP had blamed the media for exaggerating an issue of petty nature and inflating the casualty figures. The fresh clash showed that the dispute between the two factions fuelled largely by leadership tussle is far from unresolved and would continue to flare up. The internecine clashes prompted some TTP commanders, including the Mohmand Agency chapter head Omar Khalid Khurasani, to accuse the government of using the issue of peace talks to create divisions in the outlawed organisation. Denying the accusation, the government reiterated that it had started the peace talks with utmost sincerity and had no ulterior motives. Some TTP commanders have also alleged that deployment of troops and weapons in South Waziristan has increased and it could be in preparations for a military operation.

The government is waiting for the leadership of the fractious TTP to make up its mind whether it wants to continue the peace talks and is willing to an extension in the ceasefire to make the process meaningful. Until then, the uncertainty about the peace initiative would continue and the hopes regarding its success would keep receding.

Till they make up their mind