Mai Kolachi and after 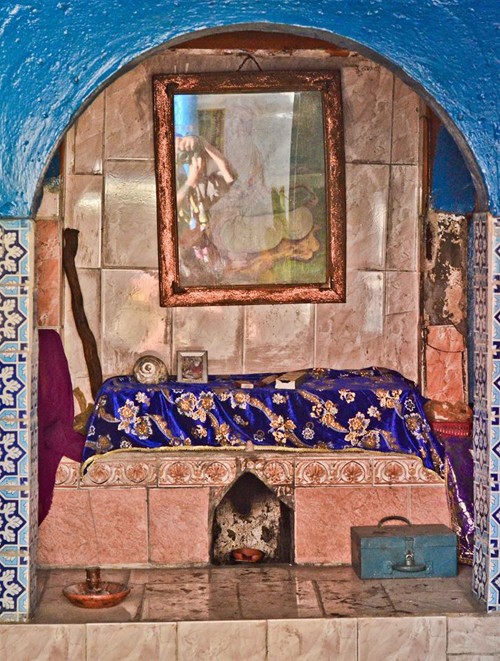 "Go right in," said an old woman sitting on a charpoy with a couple of younger men. Marks of age were etched on her old skin. I was surprised at her friendly nature.

She has seen the partition, transformation of Karachi from a small city to a metropolitan, unabated political violence and their status as Hindus progressively diminish in a Muslim country. Yet she was so trusting of us, welcoming us to go ahead and see the Hindu temple from the inside.

I was accompanied by two of my friends Humayun Memon and Sadia Khatri, both belonging to Karachi. Their cameras dangled around their necks but the people sitting outside did not seem to mind that. We walked right in.

The sea was in front of us. There were stairs leading right into it; on the base of it were a few worn out boats. A boy of about 15 was sleeping in one of those boats, oscillating in the sea, under the winter sun. Another group of boys was sailing further away. There was a small stretch of mangrove forest in front of us, while on the other side was the newly-opened Port Grand. The water of the sea was a dark black given all the waste that is deposited into it by the nearby industries.

Once the mangrove forest spread all around this region but slowly, as human civilisation expanded, it receded. Now it is only found in some remote places of Karachi. Mangroves are nature’s way of protecting the coastal life from a Tsunami. With no natural protection, I shudder to think what would happen if a storm strikes.

Behind us was a mural of Jhule Lal, an old man standing on top of a fish. Jhule Lal also known as Uderolal is one of the most important Hindu deities to Sindhi Hindus. He is believed to have lived in the 10th century and is said to have salvaged the local Hindu community from the hands of a Muslim tyrant ruler who wanted to persecute them. Jhule Lal is particularly important to fishermen who pray to him for a safe return before venturing out in the water.

The legend of Jhule Lal, celebrated across Pakistan and India, grew at a time when there was no concept of a universal Hindu religion.

Before Karachi became a British port and a metropolitan in Pakistan, it was a village called Kolachi and these fishermen were the original inhabitants of the place. Today, they have been sidelined to a small community within this ever-expanding city and have been categorised into a patronised group of minorities.

This temple is located in the Mai Kolachi area. The name is a tribute to a Hindu woman who jumped into the sea to save her son from a fish. According to a legend, the name of this village became Kolachi, her namesake.

Today, in this war in Karachi, between Sindhis and Mohajirs, Mohajirs and Pathans, Sunni and Shia and secular and religious, the Hindu fishermen Sindhis, who gave Karachi its name and its identity, are not even part of the discussion. They sit here, in this temple, in the shadow of the newest edition to Karachi’s vibrant lifestyle on the sidelines.

The legend of Jhule Lal, celebrated across Pakistan and India, grew at a time when there was no concept of a universal Hindu religion. Different geographical areas and communities had their own distinct identities and concepts of what their religion meant. However, following the increase in connectivity between remote regions, firstly through railway and then through media, a more distinct universal Hinduism emerged that has sidelined parochial subtleties.

Jhule Lal has managed to avoid this onslaught and is one of the most identified name all over Pakistan. The qawwali Mast Qalandhar, which has been sung by singers as diverse as Noor Jehan, Nusrat Fateh Ali Khan and Junoon was actually composed by these Sindhi Hindus as a tribute to their folk deity. It was picked up by the Punjabi mystical poet, Bulleh Shah, who added his verses to it to include the Muslim saint, Shahbaz Qalandar.

What do these terms mean today when the country is going through a major identity crisis? Our identities have, in the recent years, become much more exclusivist as we have put up boundaries against intrusion from external sources. Karachi being the largest city of the country is not alien to this phenomenon and yet, in Karachi, the myth of Mai Kolachi is still alive.

Similarly, as sectarian violence takes its toll over the city and fanatic mobs burn down Hindu temples in other parts of Sindh, Hindu temples and Muslim shrines sing the legend of Jhule Lal and how he saved the local community from the wrath of a Muslim tyrant.

Mai Kolachi and after