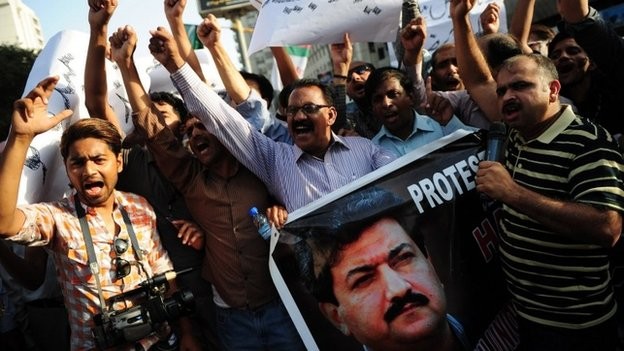 Intelligence agencies often gauge their success by the influence they have -- and also by the lack of attention they receive in mainstream media. Not being talked about is often a huge compliment to an intelligence agency.

In some cases, however, while there may be an absence of open debate about an intelligence agency’s work, there are whispers that keep adding pressure. And when things fall apart -- as they did in Pakistan last week -- the lid is blown off with a loud explosion.

The obvious needs to be stated: the ISI is part of the Pakistani military and is engaged in a war with terrorists for the very existence of Pakistan. Often times it has done commendable work in making this country safer.

While we love to make noise over the mistakes of the ISI, it remains true that the agency’s successes often go unnoticed. This is not meant to suggest that this makes the ISI different from other intelligence agencies -- but it does not make its job less heroic. The CIA’s headquarters in Langley lists its fallen heroes on the wall with no names -- simply a star. Intelligence agencies often carry out extremely dangerous tasks on behalf of a country while bearing the risk and no entitlement to receive praise. That is the unfortunate, yet heroic, nature of the job.

That is one side of the picture. The other side is, the argument goes, that intelligence agencies often act as a law unto themselves. Since governments often find it convenient to have someone else do their dirty work, intelligence agencies benefit from lack of control. On top of this, in countries with a distorted civil-military relationship, the intelligence agencies are often accused of carrying out tasks that have not been sanctioned by the executive or the legislature -- but only the military leadership.

An intelligence agency therefore has an uncomfortable and perennially dual existence. It is, admittedly, a hero half the time and seen as a villain the other half of the time. The explosion of accusations and debate in the aftermath of the unfortunate and dastardly attack on Mr Hamid Mir puts this in stark perspective.

The television network that employs Mr Mir allegedly went too far in hurling accusations without any proof. And now it has received from PEMRA a show-cause notice that jeopardises the existence and future of Pakistan’s most widely watched news channel.

The issue represents that constant bone of contention: freedom of speech and its limits. Of course there are those who advocate no limit on free speech but since that view does not hold much currency in this country, I will not analyse it here.

This is not meant to excuse the reporting or analysis in the aftermath of the attack on Mr Mir. My point is that for far too long we have ignored ridiculous theories of analysis when it came to the presidency under Mr Zardari or the much maligned PPP government. "Where there is smoke there is fire" went the argument back then. It, of course, made no sense for the so-called analysts to go on and on about corruption scandals that were never proven.

The fact that our news channels thrive on sensationalism and shoddy reporting is no secret. Also obvious is that half-baked analysis is a sure shot way of improving ratings. The malaise therefore is general and not specific to reporting when it comes to the ISI or the military. Therefore, if Pemra or any law for that matter imposes a higher burden on news organisations when discussing the military would be and is a travesty of justice.

But when I say that the reporting is often irresponsible, I do not mean to encourage the discourse that advocates banning news channels. Media by its very nature is divisive. For every sensationalist report, there will be a more balanced one somewhere along the way.

This was proven in this case too; as Mr Mir’s channel bent over backwards to throw out sound-bites, other channels started asking questions. Not all of those questions were valid of course. For instance, maligning another news channel because it is ‘defaming’ a state actor was not called for and makes little sense. But as the discourse broadened, even from within the noise there emerged a picture that the public could make sense of. And the bottom-line emerged: there was not enough evidence to hurl accusations at the ISI. The fact that this was done was unfortunate. But it is unfortunate to the same degree as anything else involving shoddy reporting and analysis.

However, the Ministry of Defence by complaining to Pemra made the classic mistake in this situation. If it had let the issue die down, people would have forgotten about it and would have blamed a major news channel for its conduct. This was a case of staggeringly bad strategy when it comes to public relations.

And if the ISI and Ministry of Defence feel that they have been wronged by irresponsible reporting, then it makes little sense to argue that another wrong should be committed against a news channel by taking it off the air.