Celebrate Marquez but why 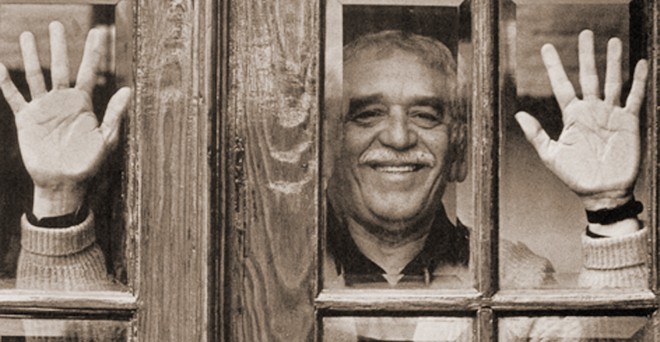 How can one write about Marquez’s life and work in an objective manner?

The sheer scale, the reach, the reputation, and the impact of his work is formidable or larger-than-life. Even the biographers succumb to the seduction and the magical reality of the man and his life.

Gerald Martin describes the logistics of the publication of The Chronicle of a Death Foretold in the following words: "Two million copies had meant buying 200 tons of paper, ten tons of cardboard and 1600 kilos of ink. Forty-five Boeing 727s had been needed to transport the copies out of Colombia alone." And this is about the second most famous novel by Marquez. It means the scale and the impact of One Hundred Years of Solitude must have been even greater. The New York Times has compared the novel to the Old Testament: "One Hundred Years of Solitude is the first piece of literature since the Book of Genesis that should be required reading for the entire human race."

Translated into more than 30 languages, his books are available almost in every bookshop and library that has a section titled ‘World Literature’. The headlines of his novels are used to describe aging and dying dictators: The Autumn of the Patriarch and No one writes to the Colonel. Any death that could have been prevented but was not is immediately described as a "death foretold." People borrow his phrases to describe their everyday frustrations in the same way they borrow words from the Bible, Shakespeare, and the Arabian Nights.

Some have described him as the Scheherazade of the 20th century. A writer who has acquired a persona larger than the continents on which his books are sold, he is an icon that simultaneously unites and divides the human race.

Marquez has been celebrated by the global Left as their representative, especially because of his friendship with Fidel Castro and some encounters with Che Guevara. But Marquez was also a friend with Bill Clinton and not totally committed to any cause. In his own words, "the only revolutionary duty of a writer is to write well." But that is not how others, more committed to their causes, felt about the man who could have done so much for reducing structural violence in the world. Both Reinaldo Arenas and Mario Vargas Llosa felt that Marquez was on the side of injustice. Susan Sontag felt infuriated because Marquez did not condemn the atrocities committed by Castro. Marquez defended himself by saying he was using his friendship with Castro to help the dissidents in Cuba.

It seems human beings want to read Marquez and Paulo Coelho and not Marquis de Sade or Reinaldo Arenas because the former two keep the illusions of their readers intact and even encourage them to have greater illusions.

This aspect of Marquez’s life requires elaboration. It seems Marquez had become a representative of the human race. Human beings are, almost universally, very hierarchical in the way they imagine the world and, almost everywhere, respect power first and concern themselves with justice only if they themselves need it. There is another way to illustrate this point: by looking at the lives of Reinaldo Arenas and Gabriel Garcia Marquez. They were both, as far as the craft of fiction is concerned, equally good writers.

At one point in their careers, in 1969, they both even shared a prize in France for the best foreign book, the Prix du Meilleur Livre Etranger. Marquez had received it for One Hundred Years of Solitude and Reinaldo Arenas for Hallucinations: or, The Ill-Fated Peregrinations of Fray Servando.

The effect of this prize was totally opposite on the lives of both the writers. Marquez went on to become a celebrity because he was winning such prizes in other countries and other languages as well. Whereas Reinaldo Arenas was under state surveillance by Fidel Castro, a friend of Marquez. Arenas describes the situation thus: "If I had been living in the free world, this [prize] would have served me well; it would have enabled me to continue my work, and I would have become a respectable writer or something like that. In Cuba, the official impact of the reviews of the French version of Fray Servando was for me absolutely negative. I was placed under surveillance by State Security, not only as a controversial figure who had written novels such as Fray Servando and Singing from the Well which were irreverent and did not praise the regime (they really were rather critical), but as one who had the nerve to smuggle his manuscripts out of the country."

The orchestrator of this oppression, Fidel Castro, was a close friend of Marquez.

The situation was so oppressive that Marquez did not choose to live in Havana, despite having a house there and being friendly with the dictator/supreme leader of Cuba. According to his biographer Gerald Martin, Marquez justified his reluctance to live under the regime established by Fidel Castro in an interview: "I could not live in Cuba because I haven’t been through the process. It would be very difficult to arrive now and adapt myself to the conditions. I’d miss too many things. I couldn’t live with the lack of information. I am a voracious reader of newspapers and magazines from around the world."

This is the problem of the Left all over the free world. The Marxist intellectual cannot give up the freedoms of the so-called free world but also likes to idealise the enemies of democracy under the perverted logic of ‘the enemy of my enemy must be my friend’.

This is exactly how Reinaldo Arenas describes Marquez’s political actions during the crisis of the Peruvian Embassy in Havana. Ten thousand people had sought refuge in the Peruvian Embassy to seek freedom from the Castro regime. And Castro was furious and wanted to end the crisis by any and all oppressive tactics available to him. Reinaldo Arenas records, in his autobiography Before Night Falls, how Marquez supported Castro during this crisis: "Castro accused those poor people in the embassy of being antisocial and sexually depraved. I’ll never forget that speech -- Castro looked like a cornered, furious rat -- nor will I forget the hypocritical applause of García Marquez and Juan Bosch, giving their support to such a crime against the unfortunate captives."

This is how the world of celebrity is: heteronormative, hierarchical, prescriptive, opportunistic. It is possible to attain fame by availing every opportunity at self-promotion and by giving the people what they consider as their "desire" or "need" and without questioning the structural violence that is inherent in so many human collectives. It is easier to become John Howard in Australia, Henry Kissinger in the USA, Margaret Thatcher in the UK, than to say no to the structures that ensure that the aboriginal population of Australia has an average life expectancy 20 years shorter than the white population, than to ask why the people of the Middle East have to live under oppressive regimes, and than to question the social costs of governmental austerity and reducing the reach of basic services so that private organisations can expand to fill the space. Literature has to deal with the enormity of the political ramifications of our collective aspirations.

The producers of literature are not above the structures they choose to criticize or support, whether overtly or covertly. Social recognition and awards are themselves reflective that the author is not disturbing the status quo. Borges was never awarded the Nobel because of his views despite the fact that was a far more magisterial figure in world literature than Marquez

It seems human beings want to read Marquez and Paulo Coelho and not Marquis de Sade or Reinaldo Arenas because the former two keep the illusions of their readers intact and even encourage them to have greater illusions.

Celebrate Marquez but why